Picasolar Expands With Solar Cell Technology Developed at U of A 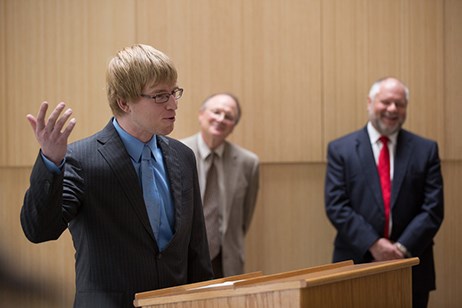 FAYETTEVILLE, Ark. – Picasolar Inc., a solar start-up company affiliated with the University of Arkansas, dedicated its new headquarters on Wednesday at the Arkansas Research and Technology Park.

The 2,300-square-foot space in the Enterprise Center at the technology park allows Picasolar to greatly shorten the time it takes to produce its patent-pending product. That product, called a hydrogen super emitter – improves solar cell efficiency and reduces the amount of silver needed in the manufacture of solar panels, making them more marketable and affordable.

“This is a big step for our company,” Hutchings said. “With 1,000 square feet of new lab space, we will accelerate our proprietary process to make solar cells more efficient. The infrastructure and equipment we have assembled will streamline our transition from research and development to commercializing products.”

The University of Arkansas has supported and partnered with Picasolar through its development as a company.

Seth Shumate invented the super emitter as a student at the U of A, and Hutchings and Shumate have both worked closely with Hameed Naseem, a professor of electrical engineering, in the Photovoltaics Research Lab at the Arkansas Research and Technology Park.

“It is exciting to see Picasolar continue to grow and be successful,” said Jim Rankin, vice provost for research and economic development at the U of A. “There is a great deal of promising solar research occurring at the University of Arkansas and we look forward to seeing it transition from the lab to the market.”

In 2014, Picasolar raised $1.2 million in equity investments on top of receiving an $800,000 SunShot Initiative award through the U.S. Department of Energy. In April, Picasolar’s super emitter was recognized with a prestigious 2015 Edison Award. The Edison awards, inspired by Thomas Edison’s persistence and inventiveness, recognize innovation, creativity and ingenuity in the global economy.