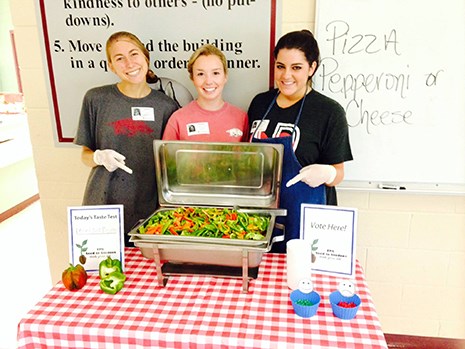 FAYETTEVILLE, Ark. – When Fayetteville Public School Nutrition Supervisor Allyson Mrachek needed help with taste testings this fall for the newly introduced Harvest of the Month program, she reached out to human nutrition and hospitality innovation students with a dietetics concentration in the Dale Bumpers College of Agricultural, Food and Life Sciences at the University of Arkansas.

Harvest of the Month is a nationwide effort designed to get students excited about fresh, locally grown fruits and vegetables by introducing them to a new food each month. The program was introduced this fall, but is part of the Fayetteville district's Seed to Student initiative that began in 2005. The addition of the Harvest of the Month program has already had a significant impact, allowing a 60 percent increase in dollars spent by the school district on local products over the last quarter (July-September) when compared to the same quarter in 2013, said Mrachek.

Four student volunteers have been helping Mrachek with the introduction of the program since its debut in September. Student Dietetic Association club members Haley Hermansen-Webb, Gretchen Wood, Mackenzie Harper and Grace Heymsfield have been assisting with taste-testings at schools in the district. Mrachek said if students try something first they will be more likely to put it on their tray at lunch.

“The reason we do taste tests in the cafeteria is to introduce students to food in a safe, non-threatening environment,” said Mrachek.

Hermansen-Webb said that she was nervous about how the kids would respond to bell peppers when they were introduced at the first taste testing in September, but it went surprisingly well.

“They tried it and some of them asked for five or six different samples,” said Hermansen-Webb. “Technically I am only supposed to give them one or two to make sure I have enough, but I couldn't keep some of them away and that was really cool.”

Some of the kids are still apprehensive of trying new foods, said Hermansen-Webb, but “they are a little more open-minded every time.”

After the students taste the featured food of the month, they have the chance to vote on whether or not they like it by placing a green or red bead in a designated bin.

“The idea is to get an idea of how many kids like it and how many kids are willing to try it,” said Hermansen-Webb. “If it's a good result, I think the goal is to start incorporating it into their salad bars.”

Hermansen-Webb said this program has given her more experience in an area that she was unsure she would enjoy.

“It's my first time working with children in nutrition studying,” said Hermansen-Webb. “It's really given me something to look forward to during those weeks, so I'll have to keep that in mind when I'm applying for jobs.”

Michelle Bailey, an instructor in the dietetics concentration for the human nutrition and hospitality innovation program in the School of Human Environmental Sciences, said Harvest of the Month is a great way for dietetics students to prepare for their career.

“The Harvest of the Month program is a perfect opportunity for U of A junior- and senior-level dietetics students to begin developing skills in terms of providing nutrition education to school aged children and adolescents,” said Bailey.

The four student volunteers have the opportunity to assist with Harvest of the Month taste testings through the end of the 2014-15 school year.