Razorback Marching Band to Give Two Encore Shows in Dallas 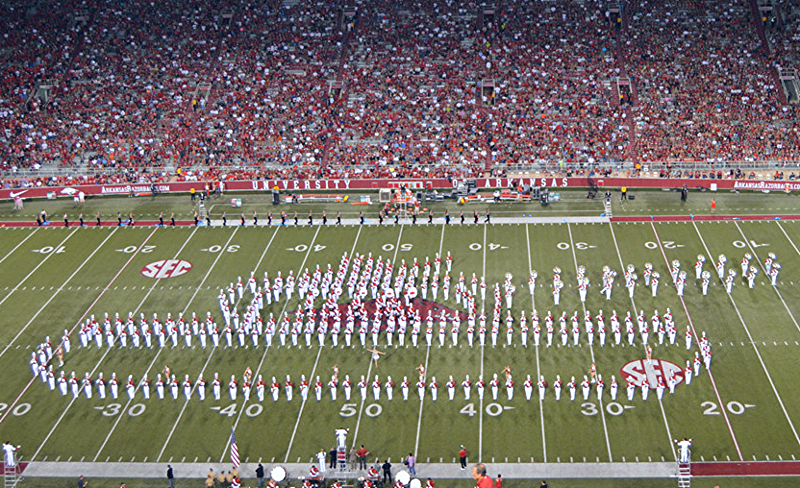 FAYETTEVILLE, Ark. – The Razorback Marching Band will present an encore of its Hometown Heroes and Frozen shows while in Dallas, Texas, to participate in the Southwest Classic.

“The crowd response to our first two halftime shows has been incredible,” said Robert Hopper, associate director of operations for the U of A Bands Program. “We could not be more excited to share both shows again while we are in Dallas.”

The band will reprise its performance of Hometown Heroes when the Arkansas Razorbacks play the Texas A&M Aggies Saturday, Sept. 27, in AT&T Stadium. Kickoff is scheduled for 2:30 p.m.

The show includes the Armed Forces Medley, an arrangement of the military anthems Semper Paratus, The Army Goes Rolling Along, Anchors Aweigh, The Wild Blue Yonder and The Marines’ Hymn.

The stadium, which serves as home to the Dallas Cowboys, has some of the finest facilities in sports and has hosted the Southwest Classic three times since 2009.

While the field provides the Razorback Marching Band with one of its largest public stages, the band will also use the trip to continue its outreach to high school students in a smaller venue. Friday, Sept. 26, the band will perform a drill to selections from Disney’s Frozen as part of a halftime exhibition at the football game between Midlothian and South Grand Prairie High Schools.

Based on the original soundtrack written and composed by Kristen Anderson-Lopez and Robert Lopez, the show highlights the most memorable musical moments from the film including For the First Time in Forever, Do You Want to Build a Snowman and Let It Go. David Gorham, University of Arkansas alumnus and former director of bands at Owasso High school in Owasso, Oklahoma, arranged the music. Ben Chamberlain, director of athletic bands, wrote the marching drill.

The Razorback Marching Band is part of the department of music in the J. William Fulbright College of Arts and Sciences. The band is made of more than 330 student members representing every college within the university.