College of Engineering Welcomes Its Most Diverse Class of Freshmen 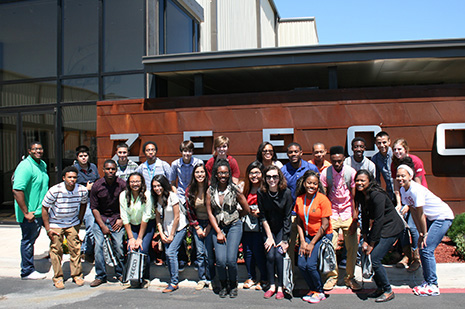 The number of freshmen from historically underrepresented populations has grown dramatically over the last 10 years.

FAYETTEVILLE, Ark. – The College of Engineering at the University Arkansas saw record-breaking numbers of female and minority students in its freshman class this fall, while also seeing an all-time high in its average ACT score.

In recent years, the college has focused on recruiting students from underrepresented groups, and it has been successful in increasing this population without sacrificing academic standards.

One hundred seventy-six of these freshmen are from ethnic minority groups, a record-breaking 24.6 percent. Students who are underrepresented in engineering, a group that includes both females and ethnic minority males, make up 42 percent of the entering freshman class.

“I am extremely happy with these numbers, and I want to congratulate our recruiting staff for the excellent job they have done attracting this great group of students,” said engineering Dean John English. “Through diversity initiatives such as the Engineering Career Awareness Program, the college has made great strides, and we’ve kept pace with national trends. On the national level and here at the U of A, engineering still has a long way to go, but I’m confident that we will have even more impressive numbers in the future.”

Total undergraduate enrollment in the College of Engineering also broke college records, topping 3,000 for the first time. The college has grown in both size and diversity without sacrificing academic standards – the freshman class also has the highest ACT average in college history, 28.1.

Diversity is a pressing concern for the field of engineering. On its website, the American Society for Engineering Education states that “in order for the U.S. to remain technologically competitive, the engineering education community and profession must increase the engagement of our entire population in promoting engineering as a desired career option and promote the pursuit of engineering careers among those who have been historically under-represented within the engineering community.”

About the College of Engineering

The University of Arkansas College of Engineering is the only comprehensive engineering program in the state of Arkansas. The college offers graduate and undergraduate degrees in nine engineering fields, as well as incorporating distance learning and interdisciplinary programs. Faculty in the College of Engineering are conducting research in many key areas, including electronics, energy, healthcare logistics, nanotechnology, transportation and logistics.

About the University of Arkansas

The University of Arkansas provides an internationally competitive education for undergraduate and graduate students in a wide spectrum of disciplines; contributes new knowledge, economic development, basic and applied research and creative activity; and provides service to academic and professional disciplines and to society in general, all aimed at fulfilling its public land-grant mission to serve Arkansas and beyond as a partner, resource and catalyst. The Carnegie Foundation classifies the University of Arkansas among only 2 percent of universities in America that have the highest level of research. Founded in 1871, the University of Arkansas comprises 10 colleges and schools and offers more than 200 academic programs. The university maintains a low student-to-faculty ratio of 19:1 that promotes personal attention and mentoring opportunities. U.S. News & World Report ranks the University of Arkansas 69th among the 623 American public research universities, and the university’s goal is be top 50 by the celebration of its 150th anniversary in 2021.