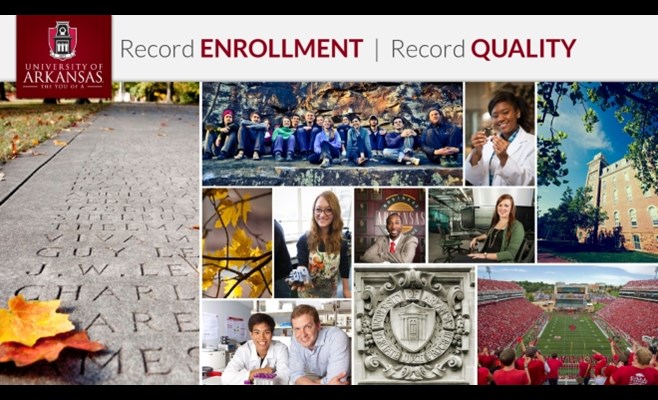 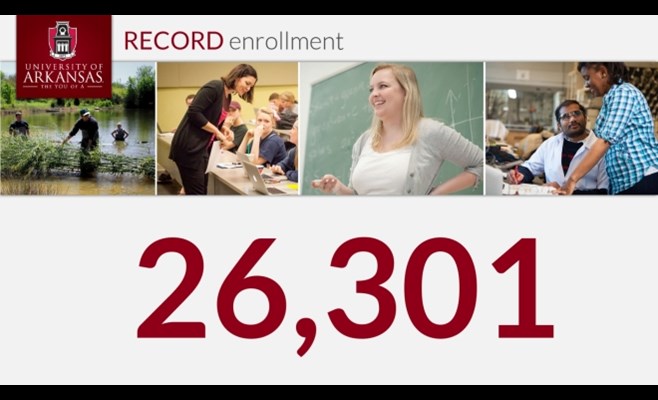 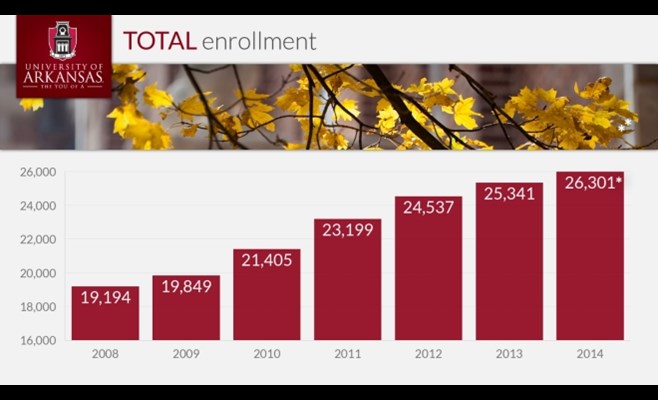 Growth since 2008 has risen steadily. 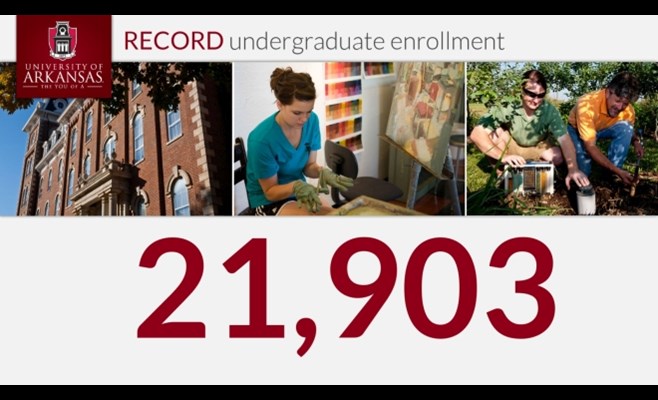 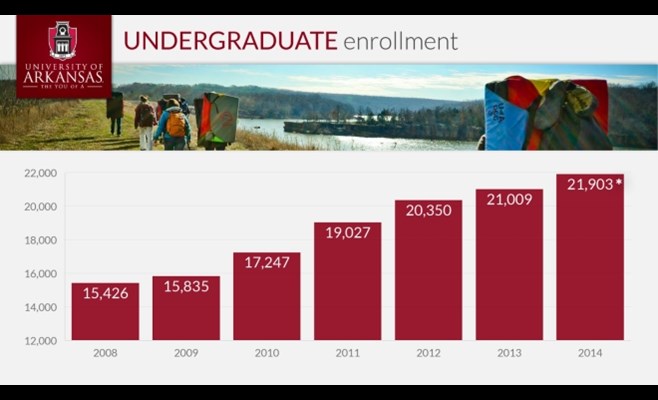 Undergraduate enrollment has climbed 42 percent since 2008. 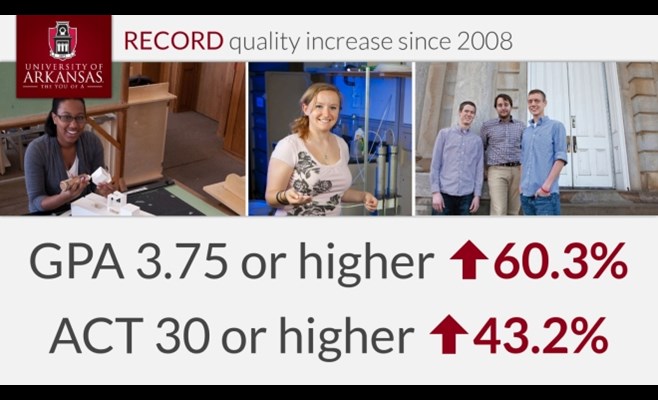 GPA and ACT scores of the student body are significantly higher. 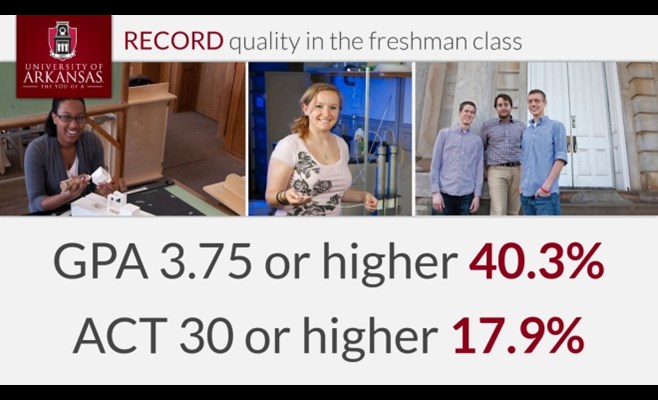 The GPA and ACT scores are also higher among new students. 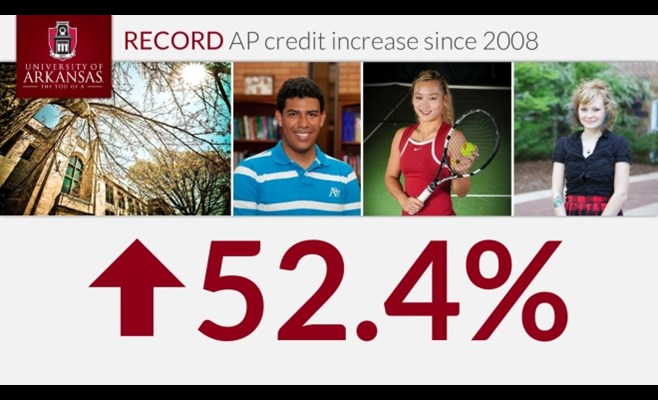 The number of students with AP credit also continues to rise. 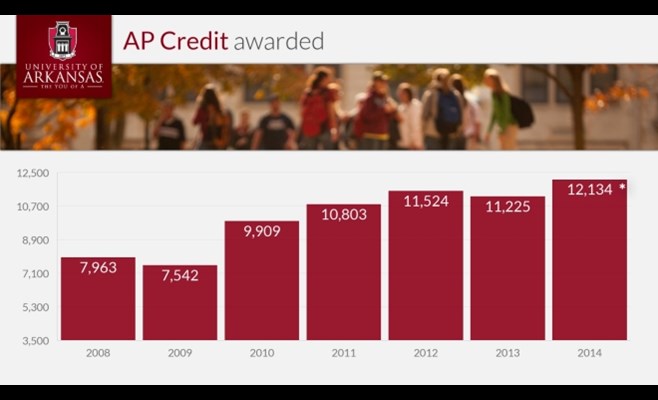 Since 2008, the amount of AP credit awarded has risen 52 percent. 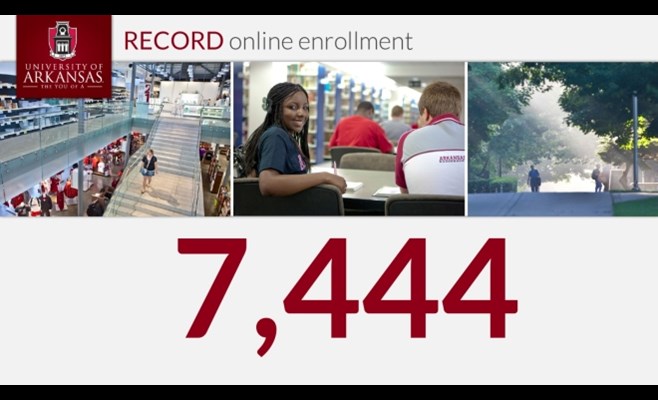 A record 7,444 are enrolled in at least one online course. 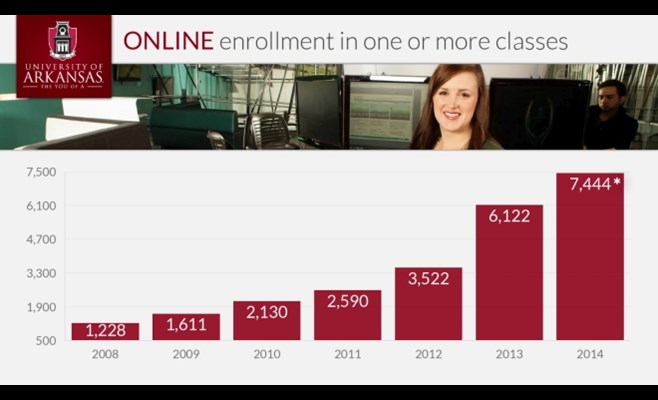 Online enrollment has increased more than 500 percent since 2008. 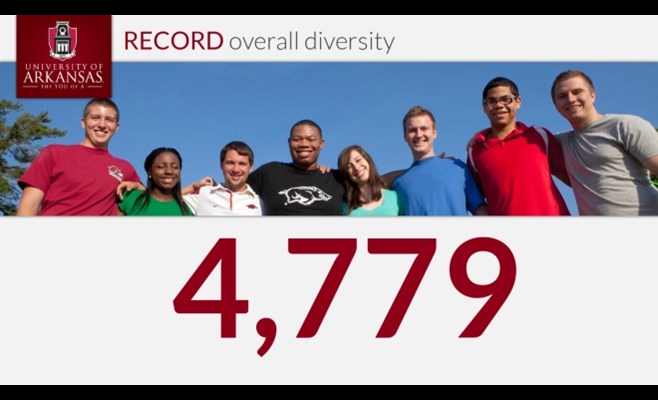 Diversity of the U of A student body continues to grow as well. 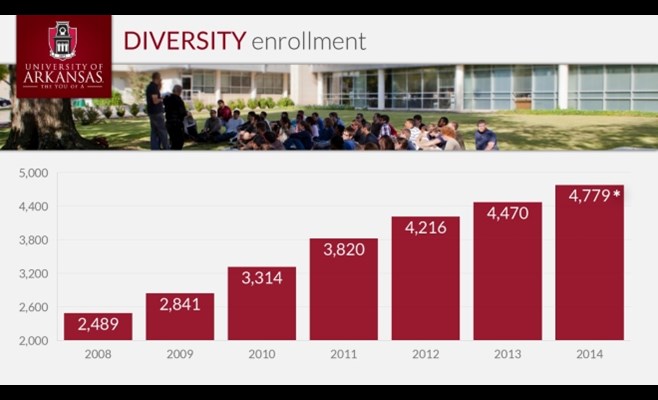 The number of students who hail from diverse backgrounds has grown 92 percent since 2008. 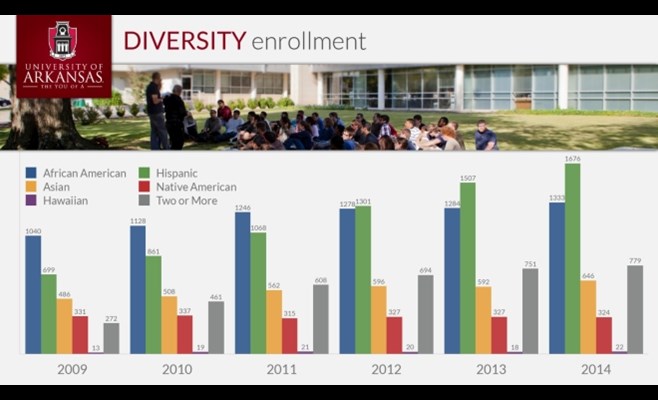 A breakdown of ethnic diversity by year. 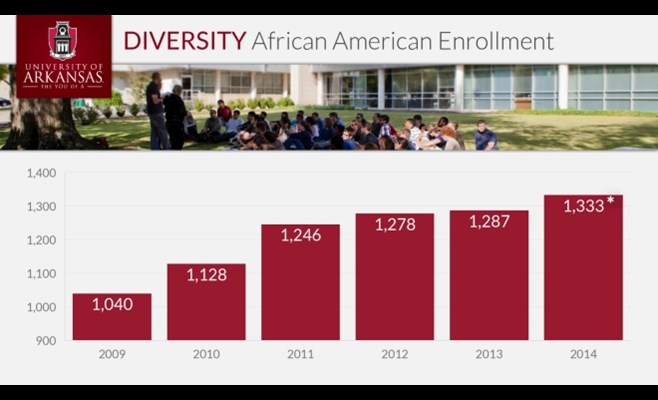 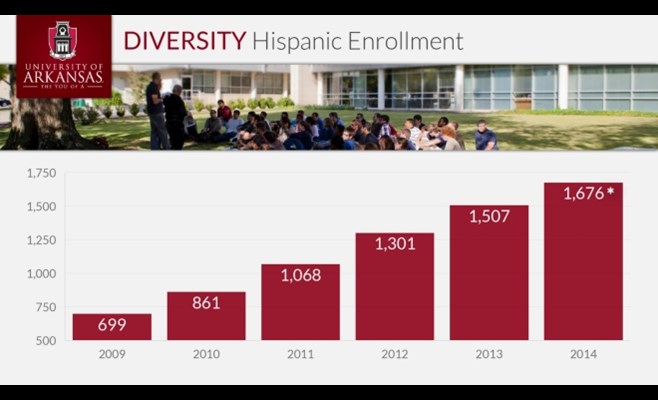 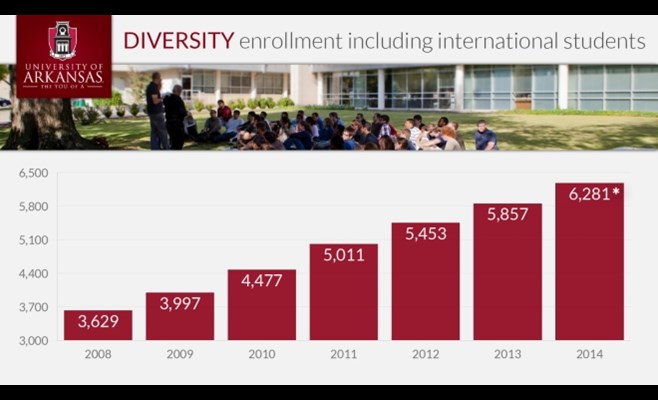 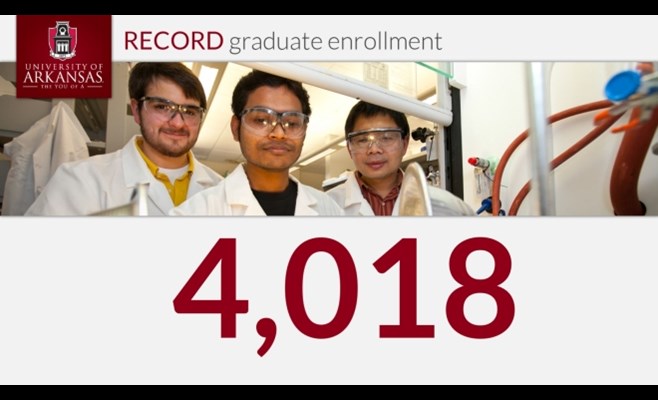 Enrollment in Graduate School has also hit a new record. 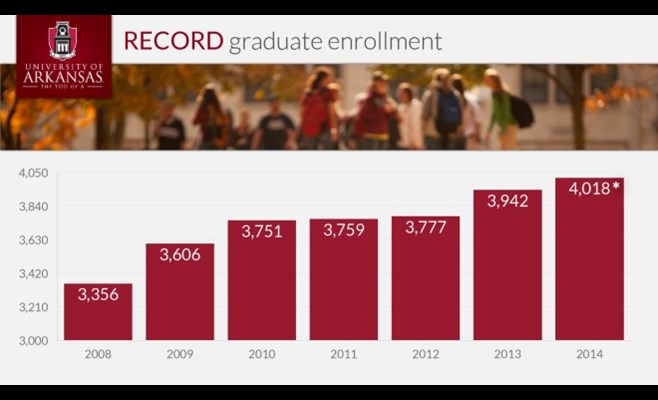 Graduate enrollment has increased 20 percent since 2008. 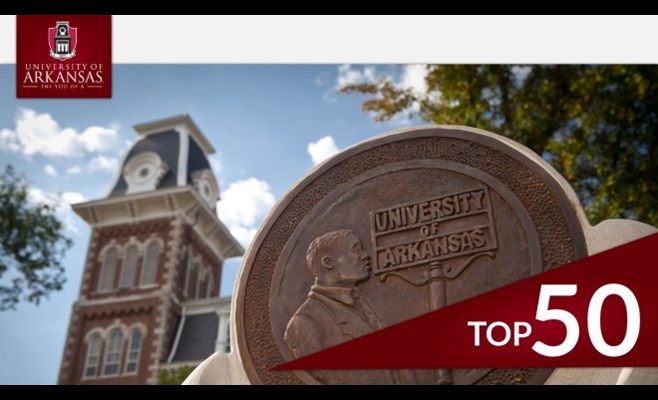 Enrollment growth and quality position the university to become a top 50 public university by 2021. 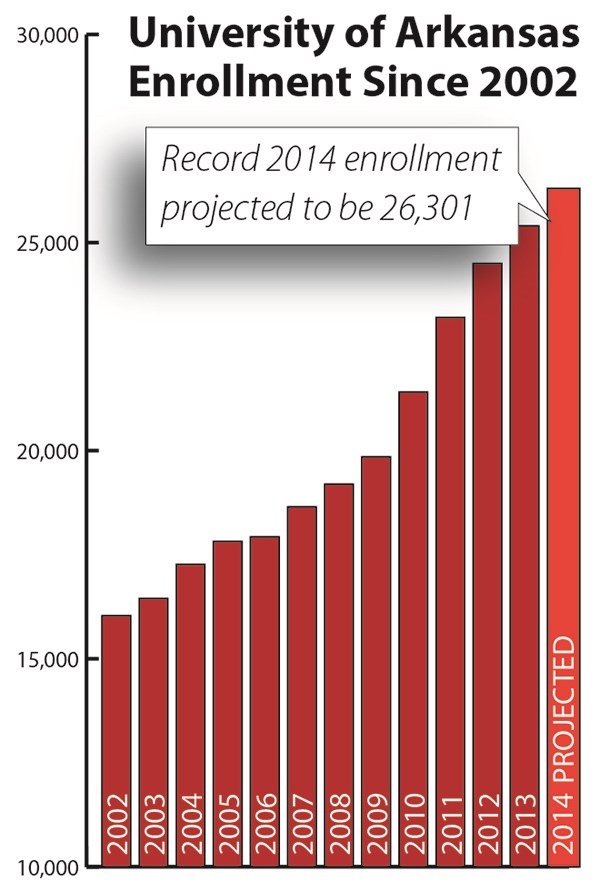 FAYETTEVILLE, Ark. – Preliminary enrollment figures at the University of Arkansas show that for the first time the flagship campus has a total of 26,301 students for the fall semester as of Tuesday, Sept. 2. Chancellor G. David Gearhart made the announcement at a news conference Sept. 3. The total is a 3.8 percent increase from the fall 2013 enrollment, a rate of growth that university administrators believe is sustainable. The enrollment growth continues to show improvement in both academic quality and diversity of the student body.

“This is a great time to be attending the University of Arkansas,” the chancellor said. “We’re excited to launch the 2014-15 academic year on the heels of several good news items: National Jurist prelaw magazine recently ranked our law school the best value in the country; the Chronicle of Higher Education recognized us as being the 7th fastest-growing research institution in the nation, and The Princeton Review and Kiplingers have both ranked us among the top institutions for value and quality. Indeed, we are bigger, better, smarter and more diverse than ever before.”

“There is no question that we have grown quickly over the last several years,” Gearhart said. “This is not by accident, but part of a long-term plan we put in place to increase the size, quality and academic reputation of the university. Improving our graduation and retention rates will be a major point of emphasis for us between now and 2021.”

Since 2008, University of Arkansas enrollment has increased by 37 percent – 7,100 students. This growth trend led the Chronicle of Higher Education to rank the U of A as the 7th fastest-growing public research university in the country.

This fall’s freshman class of 4,579 students set a new record, too, according to the preliminary numbers, with five students more than the 2012 class, which was itself the previous record-setting freshman class.

Undergraduate and graduate student enrollments are both up this year, according to the preliminary numbers, captured Sept. 2. Suzanne McCray, dean of admissions and vice provost for enrollment management reported that there are a record 21,903 undergraduate students enrolled on campus, a 4.2 percent increase over last year, and a 41 percent gain over the last six years. She said that continuing students make up a significant part of this growth, a good sign for improved retention.

“Since 2008, we have added more than 7,000 students to our campus without any decline in academic caliber,” McCray said. “In fact, we have seen a 43.2 percent increase in the number of students with an ACT of 30 or higher since 2008.”

“We are as excited by the quality of our students as we are by the numbers,” McCray said.

McCray explained that the university’s determination to enroll students who are prepared to succeed academically is a major factor in improving retention and graduation rates.

Perhaps the greatest single area of growth in 2014 is in online enrollment. Under the leadership of Javier Reyes, vice provost for distance education, there are now 7,444 students taking at least one online class this semester, a 21.6 percent increase over last year and a 506 percent increase since 2008.

The current enrollment figures are still preliminary. The official numbers will not be available until after the “11th day snapshot” required by the Arkansas Department of Higher Education. That enrollment data will be analyzed and reviewed for accuracy before a preliminary report is submitted to the department, with the final numbers from that 11th day snapshot officially filed by mid-October.

Provost Sharon Gaber said that the university has worked hard not only to increase enrollment but to provide the growing number of students with the resources they expect.

“We’ve worked hard to expand our capacity to educate students, while keeping class sizes small,” Gaber said. “We’ve invested in new construction to renovate, expand and modernize our campus. New faculty members are also being added at a pace commensurate with our growth. Since 2010, we have added nearly 70 additional tenure track and 200 non-tenure track positions, with an expectation that more will be added in the next fiscal year. Growth at the University of Arkansas will not come at the cost of quality interaction with an instructor.”

Enhancing academic advising, requiring freshmen attend a transition class on “Destination Graduation,” and working to increase the number of classes with fewer than 20 students by adding additional sections and additional new faculty positions are just a few of the specific steps the U of A has taken to help retain students. “UASuccess,” a new online appointment scheduling and advising tool for faculty, staff and students, began operation in fall 2013. Finally, the university’s first-ever office of retention and graduation will launch this year to serve as an institution-wide catalyst for initiating, implementing and reviewing goals and actions to increase graduation and retention rates.