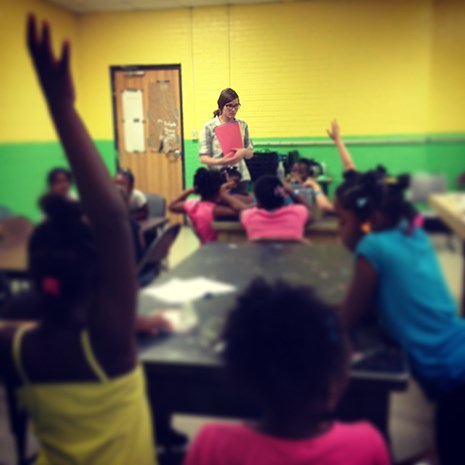 FAYETTEVILLE, Ark. – The Arkansas Teacher Corps is now accepting applications for its third group of Fellows, who will start teaching in the 2015-16 school year. The alternative-licensure program was created to help school districts with hard-to-fill teaching positions. The program provides an accelerated path to teaching for applicants who come from a wide range of backgrounds and educational experiences. It was established in 2013 by the College of Education and Health Professions at the University of Arkansas.

Applications are available on the Arkansas Teacher Corps website. The application deadlines are Dec. 28 for early decision candidates and March 1 for regular decision candidates. In addition to their regular teaching salary, Fellows receive a $15,000 stipend paid over their three years of teaching with the program.

The program now has a total of 35 Fellows teaching in high-need schools primarily in the southern and eastern parts of the state.

One of these new Arkansas Teacher Corps Fellows brings nearly 30 years of experience in financial services to his five high school business classes this fall at Jacksonville Lighthouse Academy, a charter school in Pulaski County.

Chris Collier, 55, of Little Rock has had a lifetime of experiences that led him to recognize teaching as his calling. He originally worked as a financial adviser and manager and became aware of the impact he might have on students through multiple volunteer experiences including Junior Achievement, coaching and classroom guest speaking. Additionally, he founded a business offering youth sports tournaments and sought an opportunity for a long-term substitute teaching position that confirmed his desire to become an educator.

“We are pleased by the number of highly qualified individuals who have applied for the program so far,” said Benton Brown, executive director of Arkansas Teacher Corps. “We have received more than 300 applications in the past two years from individuals with extremely diverse backgrounds. With the continued need for additional high-quality teachers across the state, we are hoping to receive even more exceptional applications this year.”

Fellows are required to attend a six-week summer institute for intensive training and to pass the required Praxis exams to gain licensure in Arkansas.

Collier said the summer institute, which took place this year in El Dorado, exceeded his expectations with its wealth of hands-on work and practical application of teaching methods.

“We spent time working in summer school classes in El Dorado, we were observed and we received feedback,” Collier said. “We were put through our paces.”

Collier said feedback from students and other teachers has been good so far. He talks regularly with the mentor assigned to him, a teacher in Fordyce.

Randi Curtis, a 2013 college graduate in her second year as a Fellow, represents the other end of the spectrum, in terms of experience. She is teaching art in seventh through 12th grades at Prescott High School. She plans to start a drama club at the school this year.

Curtis said she loves the job and already feels more comfortable with the first year under her belt.

“With teaching, you can do as much theoretical work as possible but nothing compares to being in classroom,” she said. “That’s where learning happens for my students and for me. The support from Arkansas Teacher Corps sending people to observe and mentor us throughout the year has been so helpful. It’s a hard job and I knew that going in, but it has definitely been worth it. They need us here.”

Following is a list of the new Fellows, their hometowns, where they received their degrees, the subjects they are teaching and where: