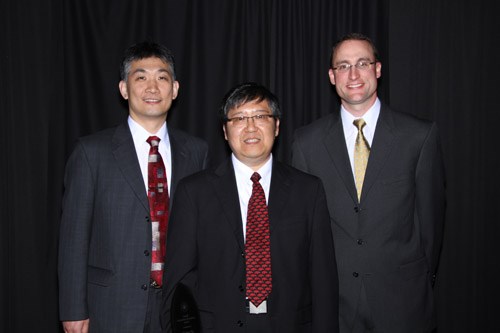 From left to right, Jia Di, Fisher Yu and Douglas Spearot, recipients of the 2014 College of Engineering Imhoff Award.

Three College of Engineering faculty members received awards during the college's annual banquet on Saturday, April 5, at the Springdale Holiday Inn and Convention Center. The John L. Imhoff award was established in 2004 by John Imhoff, former head and founder of the industrial engineering department, to recognize faculty members who have excelled in research and teaching in the College of Engineering.

In 2007, Spearot received the Ralph E. Power Junior Faculty Enhancement Award to support his study of plasticity in nanostructured materials. In 2010, he was awarded a National Science Foundation CAREER Award to elucidate the nanoscale mechanisms associated with phase selected during vapor deposition. In 2012, he received a Young Leader International Scholar Award from the Minerals, Metals and Materials Society.

Di’s research focuses on delay-insensitive asynchronous digital integrated circuit design.  Although this IC design technology was invented in the 1950s, it has not become widely used by the semiconductor industry because of the lack of applications that demonstrate its benefits and minimize its drawbacks. After years of exploration, Di has successfully identified a number of applications for which asynchronous logic has significant advantages over the prevailing synchronous solutions, and he has developed several innovations in asynchronous circuit design for each application. These applications include circuits designed for ultra-low power, extreme temperature, intense radiation, secure hardware, and process/voltage/temperature variability tolerance.

Di’s research innovations have drawn strong interest from a variety of government agencies and industry organizations.  His efforts have led to twenty-nine externally funded research projects during the past nine years. His projects include fundamental research funded by the NSF and NASA, transferrable technologies funded by industry, and national security related innovations supported by the Department of Defense.  In addition to research grants, Di’s reputation in his field has brought him several valuable academic collaborations, and he works closely with industry partners. These grants and collaborations also benefit students. During the past nine years, Di’s TruLogic Lab had has over 30 graduate students and ten undergraduates working on various research projects.

Yu received his bachelor’s and master’s degrees in electronics from Peking University  and his doctorate in electrical engineering from Arizona State University in 2005.  He spent one year as a postdoctoral research associate in ASU’s MBE Optoelectronic Group and then joined ASU’s Center for Nanophotonics as an assistant research professor.

Yu joined the U of A electrical engineering department as an assistant professor in fall 2008.  His research interests are developing novel semiconductor optoelectronic devices such as lasers, photo detectors, THz devices, and renewable energy devices covering visible to far-infrared wavelength ranges by using novel Bismide compounds and SiGeSn alloys and advanced nanofabrication techniques. Yu has published 44 articles in refereed journals and 102 articles and abstracts in conference proceedings in the areas of semiconductor optoelectronic device modeling, fabrication and characterization.  He has also contributed 126 presentations and 19 invited talks at conferences and workshops.

Yu won the Palais Outstanding Doctoral Student Award in 2005 from the ASU Electrical Engineering Department, selected out of 41 Ph.D students that graduated in 2005, and the IEEE Phoenix Society Chapter award in 2008 for technical contributions. Yu received an Outstanding Researcher award from the U of A College of Engineering in 2011, and the William D. Brown and Margaret A. Brown Faculty Excellence Award from the U of A department of electrical engineering in 2013.

In 2012, Yu received a prestigious CAREER award from the National Science Foundation. This grant supports his research in bismuth, a relatively unexplored element that could be used in semiconductors and optoelectronics. Yu is a member of the International Society for Optical Engineering and the Institute of Electrical and Electronics Engineers.

The planned contract between the U of A and Coca-Cola would cover a 10-year period, beginning on July 1.