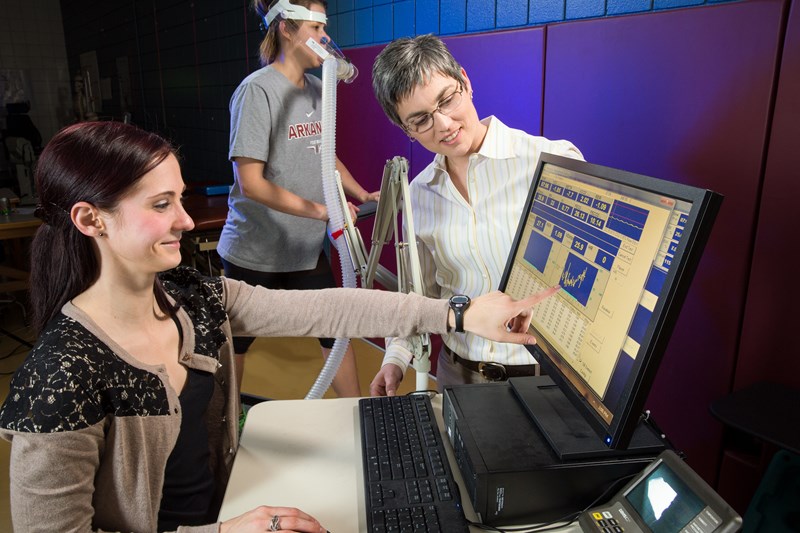 University of Arkansas graduate student Ashley Binns (left) and Michelle Gray, an assistant professor of kinesiology, collaborated on a study that found for some women, a high-protein meal followed by moderate exercise is an effective way of burning calories.

FAYETTEVILLE, Ark. – New research shows that for some women, a high-protein meal followed by 30 minutes of moderate exercise is an effective way of burning calories, especially when compared to exercising on an empty stomach.

Exercise scientists at the University of Arkansas describe their findings in a study that has been accepted by the Journal of Science and Medicine in Sport, with the title, “Thermic effect of food, exercise, and total energy expenditure in active females.”

Ashley Binns, a doctoral student in kinesiology and exercise science who led the study, said the goal was to determine the interaction between the thermic effect of food and exercise on the body’s total energy expenditure, as measured in calories. Thermic effect is the amount of energy that it takes to digest, store and utilize the food we eat.

“To my knowledge, this is the first study of its kind,” Gray said. “What Ashley found is important because of the growing problem of obesity in the United States. If simple changes can increase our energy expenditure, then they may have a large impact on weight loss or weight maintenance.”

Ten active college-age women of normal body weight participated in the study. For their testing sessions, they were given a high-protein meal, low-protein meal, or no food at all, before walking on a treadmill.

Binns selected these women because they were “recreationally active,” which meant that they normally exercised at least twice a week, but they weren’t athletes or severely overweight.

“Studies involving high-protein diets and low-protein diets have typically examined the extremes: athletic populations and morbidly obese individuals,” Binns said. “I wanted to see what the thermic effect of food was like for a normal individual, who didn’t have any metabolic disorders or medications that would affect their metabolism.”

Exercise was key to the study, Binns said, because high-protein diets without exercise can lead to muscle loss.

Binns holds two bachelor’s degrees and a master’s degree, all from the U of A. As an undergraduate, she was a dual major in nutrition and kinesiology, with a concentration in fitness specialization.

She intends to apply findings from the thermic effect study — the results of which constituted her master’s thesis — to her current interests, which focus on aging research and education with an emphasis on the interactive effects of protein consumption and exercise to reduce the deleterious effects of sarcopenia, the loss of muscle mass and strength associated with age.