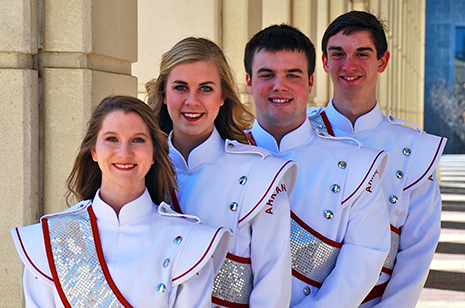 “The position of drum major in the Razorback Band has a long legacy of service and student leadership,” said Ben Chamberlain, director of the Razorback Marching Band. “I know these students cherish that tradition and will strive to add to it as they serve next year.”

The successful candidates completed four rounds of auditions. The first and second rounds consisted of a written application with selected candidates invited to conduct the Razorback Marching Band at the Lewis E. Epley Jr. Band Building.

Candidates completed the third round at the Broyles Athletics Center, which focused on teaching marching fundamentals and demonstrating the traditional pregame strut. Finally, band faculty and staff interviewed the candidates.

Each year drum majors are awarded the Preston and Kathyrn Woodruff Drum Major Scholarship. These awards were created by Tyler Thompson, a Fulbright College alumnus and former drum major, to honor the Woodruffs for their long and faithful service to the members of the Razorback Band.

Austin Cash is a first-time drum major and plays trumpet. He is a sophomore mechanical engineering.

Julianne Clements is a first-time drum major and plays piccolo. She is a freshman double major in biology and psychology.

"I could not be more excited to serve as a drum major for the Razorback Marching Band,” said Clements.  “I look forward to the opportunity to work with such incredible students and staff while helping to keep the traditions of the RMB alive."

David Cox is a first-time drum major. He is a freshman industrial engineering major and plays trumpet.

"I cannot express how thrilled I am to contribute to the Razorback Marching Band as one of its drum majors” said Cox. “It truly is a pleasure of mine to serve the University of Arkansas this way.”

Jamey Julian is a returning drum major for her third year and plays clarinet. She is music major.

“It is a honor to have been selected to serve the Razorback Marching Band as a drum major in the upcoming season.” said Julian. “It is my pleasure to be part of an organization with such a distinguished history and dedicated alumni.”