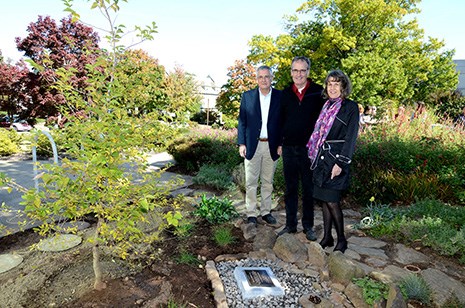 From left, Jon Lindstrom’s brothers Mark and Scott, and sister Karen Kimball, stand next to the Japanese Snowbell planted on the University of Arkansas campus in Jon’s memory

FAYETTEVILLE, Ark. – A tree-planting ceremony was held by the horticulture department in the Dale Bumpers College of Agricultural, Food and Life Sciences at the University of Arkansas on Friday, Oct. 25, in memory of associate professor Jon Lindstrom, who passed away during the summer.

The ceremony also signified the creation of the Dr. Jon Lindstrom Endowed Scholarship Fund. Funded by donations from family and friends, the scholarship is available for the 2014-15 academic year.

“Jon arrived at the university a year or two before me,” said David Hensley, horticulture department head. “He was one of the most talented and dedicated teachers in the college. It was his passion, and his students responded. They would often comment his class was one of the hardest of their college career, but one they enjoyed the most. Jon could identify and grow any plant. If he didn’t know the answer off the top of his head, he would have it in a few hours.

“Jon was well-respected by the faculty in our department, across the college and nationally in horticulture. He is greatly missed. We’re very pleased to have the Dr. Jon Lindstrom Endowed Scholarship Fund established in his honor.”

According to the Lindstrom family, the purpose of the scholarship is to further develop and encourage students to pursue research and careers in ornamental horticulture as well as create opportunities for students to follow in Lindstrom’s academic footsteps.

The recipient, who will be selected by Hensley or his designee, must be enrolled in the Bumpers College; must have and maintain a 2.7 cumulative grade point average or better to receive and retain the scholarship; and must demonstrate an interest in woody plants in addition to exhibiting qualities deemed by the horticulture department to suggest future success in a career in ornamental horticulture.

“Jon devoted himself to teaching and encouraging his students to develop a passion for woody landscape plants as well as sharing his enthusiasm for orchids,” said Bumpers College Dean Mike Vayda. “He was a tireless advocate for the student experience and dedicated countless hours to advising and supporting students outside of the classroom. This scholarship has been made possible by friends and former students of Jon and his family. I can’t think of a more wonderful way for him to be remembered and to ensure his connection to the university for years to come. He will continue to have an impact on our students.”

Anyone wishing to contribute to the scholarship fund may do so by contacting Mitchell Spearman, the Bumpers College director of external relations, at spearman@uark.edu or 479-575-2270.