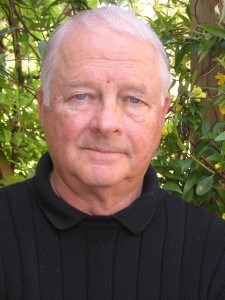 FAYETTEVILLE, Ark. – William Neal Harrison, novelist, professor emeritus of the department of English in the J. William Fulbright College of Arts and Sciences, and founder of the U of A programs in creative writing and translation, passed away on Oct. 22, a week before his 80th birthday.

A memorial service is being planned to be held in Giffels Auditorium, Old Main. The time and date will be announced.

“We’ve lost a superb writer and teacher, a master craftsman of stories,” said Todd Shields, interim dean of Fulbright College. “And of course, our campus has lost an important leader – a founder of our nationally-ranked creative writing program. Bill touched the lives of innumerable students, and his legacy lives on in the many writers whose careers he influenced and works he shaped.”

Harrison was best known for his novels The Theologian, Africana, and Burton and Speke, and his collection Roller Ball Murder and Other Stories – the title story of which become the movie, Rollerball, for which he also wrote the screenplay. He published 13 books during his career and wrote two screenplays.

He received numerous awards and honors, including the Columbia School of Journalism Prize in Fiction, a Guggenheim Fellowship, a National Endowment for the Arts Grant, and the Christopher Award for Television. From 1970-75, Harrison served on the original board of directors for the Association of Writers and Writing Programs,  the main professional organization in the field.

Originally from Dallas, Texas, Harrison joined the University of Arkansas English department in 1964. He immediately saw an opportunity to establish a master of fine arts program in creative writing, only a few of which existed across the nation at that time. In 1966, he recruited poet and novelist James Whitehead, who helped establish the graduate program. They were joined in 1970 by poet Miller Williams, who added a literary translation degree track. The program quickly gained recognition as a preeminent training ground for some of the nation’s best writers.

Harrison taught some of the most popular and influential courses the creative writing program offered, leading graduate fiction and non-fiction workshops, teaching screenwriting and craft of fiction classes, and designing seminars on James Joyce and Vladimir Nabokov, among others. He gained the rank of University Professor in 1991 and retired from the department in 1998.

“Generations of our graduates consider Bill an influential mentor and dear friend. It is not uncommon to hear one of our alumni say that they learned everything they know about writing the short story from Bill,” said Davis McCombs, director of the programs in creative writing and translation. “Our program simply wouldn't exist without his keen mind, his talent, the force of his personality, and his decades of tireless efforts on our behalf.”