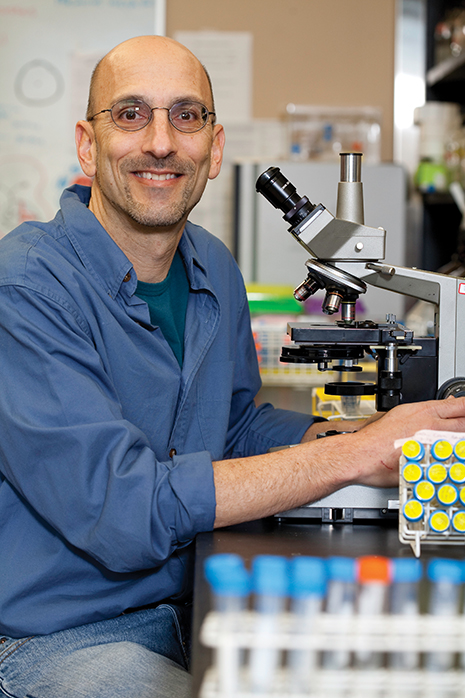 FAYETTEVILLE, Ark. – Researchers at the University of Arkansas have discovered and characterized a new organism that will help scientists understand the molecular mechanisms and ancestral genetic toolkit that enabled animals and fungi to evolve into diverse, multicellular life forms.

Jeffrey Silberman, a professor of biological sciences, isolated a new unicellular anaerobic eukaryote, and worked with former graduate student Matt Brown and others in the lab of Andrew Roger at Dalhousie University in Halifax, Nova Scotia, Cananda, on the genomics and description of this organism, which they named Pygsuia biforma. Brown, now a biology professor at Mississippi State University, is the lead author of the study, which was published August 28 in Proceedings of the Royal Society B (Biology), the top British biological research journal.

“The importance of this finding is that it helps us decipher how multicellularity evolved,” Silberman said. “It demonstrates that some genes and proteins that most people think are specific to being multicellular in animals are already present in their unicellular relatives. It is as if the genetic toolkit for becoming multicellular was assembled and modified bit by bit in the single-cell lineages that share a common ancestry with animals.”

Silberman and Brown study the origins and relationships among single-celled eukaryotes, which have nucleus, amoebae and flagellates, some of which are parasites. Animals, plants and fungi are all eukaryotes; that is, they have complex cells with organelles such as a nucleus and mitochondria. Eukaryotes and humans have more in common than most people realize, Silberman said.

Silberman and Brown perform comparative DNA sequence analyses of a type of eukaryote called protists to help find their particular placement or branch on the tree of life. By isolating formerly unexamined anaerobic protists – a diverse group of unicellular microorganisms – and looking at the independent ways they have formed different types of mitochondria, the researchers hope to reveal essential commonalities among all eukaryotes, perhaps even clues that explain their origin.

Genomic analyses of single cell organisms that are specifically related to multicellular lineages often provide clues to understanding the molecular mechanisms involved in the evolution of multi-cellular life.

To characterize the new organism, which was collected from brackish sediment in Prince Cove in Marstons Mills, Mass., the researchers described the morphology and sequenced the protein-coding genes of the organism to construct a 159-protein matrix for phylogenetic analyses. Phylogenetics is the study of the evolutionary relationships among groups of organisms. The researchers found that the organism resembled two types of a breviate, which is a unicellular eukaryote, but distinguished itself with its conspicuous, long flagella.

Most importantly, the phylogenetic tree established the organism as a distant but unequivocal relative to a “supergroup” of eukaryotes that include fungi and animals. It provides a glimpse of the various components of cell-to-cell adhesion, which is a requirement for multi-cellular organisms. The organism also possesses components of the integrin-mediated adhesion complex, which in animals plays a key role in cell-to-cell signaling and adhesion to the extracellular matrix.

The genus name for Pygsuia biforma is derived from part of the University of Arkansas Razorbacks sports cheer, “Wooo Pig Sooie,” because it has a row of structures resembling the dorsal bristles of razorbacks, which are feral pigs. “Pyg” replaces “pig” as a play on the Latin Pygmae, a mythical race of pygmies, a reference to their small size, and “sui” replaces “sooie” for brevity and a reference to the animal family to which suids, the ancient biological family of pigs, belong. Consequently the genus name also means “little pig” in mock Latin. The species name, biforma, is derived from the presence two distinct cell forms that are observed in the life cycle.

A culture sample of Pygsuia biforma has been submitted to the Smithsonian Institution.

The researchers’ work was partially funded by the Arkansas Biosciences Institute.