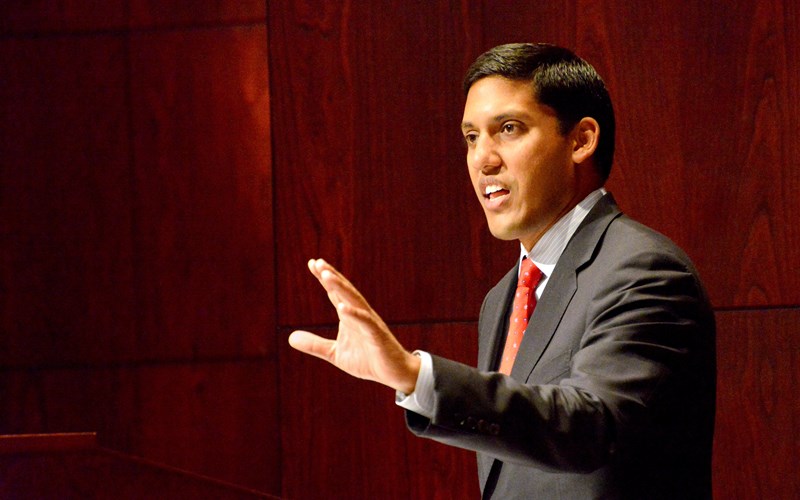 Rajiv Shah is the administrator of the U.S. Agency for International Development.

FAYETTEVILLE, Ark. – Rajiv Shah, administrator for the U.S. Agency for International Development, spoke with students and answered questions on Monday regarding partnerships and development in addressing hunger and energy needs. He was the featured speaker in the “Food for Thought” lecture series sponsored by the Bumpers College of Agricultural, Food and Life Sciences at the University of Arkansas.

The event was co-sponsored by the Walton College of Business and held in the Reynolds Center Auditorium.

Shah’s message, “Partnering with the Private Sector: A New Model of Development,” focused on reducing extreme poverty and meeting energy needs around the world.

He began by acknowledging the efforts of the Bumpers College more than 60 years ago when the University of Arkansas became the first U.S. land grant university to establish a foreign agriculture mission. Created through the Point Four Program, researchers and scientists helped Panama develop programs in agriculture, extension, teaching and research, and that relationship still exists today. The agricultural mission began in 1951 and through 1956 sent 24 university personnel to Panama.

“As University of Arkansas students, you are part of a proud legacy that sent researchers to Panama to inspire agriculture,” said Shah. “This was the first U.S. institution to serve in a mission abroad. Decades later, we are still using that same basic model to transform the face of hunger, poverty, growth and opportunity around the world.”

The “Food for Thought” series was designed to focus on food, family and the environment, which corresponds with the goal of the Bumpers College to advance the business of foods and the impact of foods on human health, environmental sustainability and human quality of life.

Earlier in the day, Shah signed a memorandum of understanding with Walmart and the Walmart Foundation that will improve livelihoods around the world by promoting women’s economic empowerment, sustainable agriculture, environmental sustainability, and vocational and life skills training for youth.

“We want to bring Walmart’s core capabilities in philanthropy and business to every part of the world to transform the face of hunger and poverty,” said Shah. “We want to look at USAID’s energy distribution centers, and rely on Walmart’s ingenuity and knowledge of faster, safer distribution of food.

“As the world has grown more interconnected, this is the face of development,” he said. “To end poverty, childhood deaths and hunger, we need to bring together businesses with supply chains for partnership to reach the farthest corners of the globe.”

Shah was sworn in on Dec. 31, 2009, and is the 16th administrator of USAID. He leads the efforts of more than 8,000 professionals in 80 missions around the world. This includes  President Obama’s Feed the Future program, a global hunger and food security initiative that focuses on 19 countries based on level of need, opportunities for partnership, potential for agricultural growth, opportunities for regional synergy and resource availability.

“We want to help change regulations so businesses can thrive,” said Shah. “We know these efforts deliver results.”

He said the program has assisted 7 million farm households, which has in turn helped improve the nutrition for 12 million children.

“It is possible to end extreme poverty in the next two decades,” he said. “We’ve seen poverty go down on every continent around the planet. Everyone in this room has the chance to contribute to the end of extreme poverty. That means the 200 million children who are stunted will be reduced to a few million and that hundreds of millions will have energy access.”

In answering questions, he said challenges to ending extreme poverty and the Feed the Future program include: new crop and product technology, and the need for countries to be open to that technology; more countries being open to trade with other countries; and political support from the administration and Congress so the program can be successful 10 to 12 years from now.

Prior to his appointment as administrator, Shah was undersecretary for research, education and economics as a chief scientist at the U.S. Department of Agriculture. At USDA, he launched the National Institute of Food and Agriculture, which increased the status and funding of agriculture research.

Before joining the Obama administration, Shah worked for seven years with the Bill and Melinda Gates Foundation, including as director of agriculture development in the Global Development Program and as director of strategic opportunities.

The first lecture in the “Food for Thought” series was held in April with U.S. Sen. John Boozman as the featured speaker.