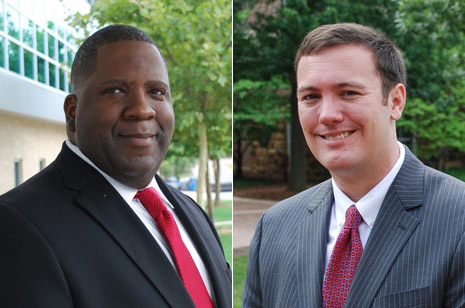 FAYETTEVILLE, Ark. – The University of Arkansas Band program, part of the department of music in the J. William Fulbright College of Arts and Sciences, has added Jamal Duncan and Robert Hopper to its team of faculty, graduate assistants and staff. Duncan will serve as assistant director of bands and Hopper as associate director of operations.

“We are excited to have Dr. Jamal Duncan and Robert Hopper join the University of Arkansas Bands,” said Chris Knighten, associate professor of music and director of university bands. “They each bring great energy and exhibit great passion for music and arts education. Their appreciation for the rich traditions of the Razorback Marching Band and Hogwild Band are matched by their commitment to the mission of the UA Bands, department of music and Fulbright College.”

As assistant director of bands, Duncan will assist in directing the Razorback Marching Band, direct the Hogwild Basketball Band and teach courses in the department of music.

“I am very excited to join a program with such great traditions and history as the University of Arkansas Bands,” said Duncan. “I'm fortunate to be able to work with talented and dedicated students. I look forward to being part of this vibrant and talented faculty and staff.”

As associate director of operations, Hopper will administer the band and music department scholarships, provide outreach to future band members, work with band alumni through the Arkansas Alumni Association and the Razorback Band Alumni Society and implement fundraising objectives.

A native of Michigan, Duncan received a doctorate of music arts in wind conducting and a master of music in wind conducting from Michigan State University. He studied under the direction of Kevin L. Sedatole and worked with the Spartan Marching Band and Spartan Brass. He also served as conductor for the campus band, and guest conductor for the wind symphony, symphony band, concert band and Musique 21.

Duncan received a bachelor of music in clarinet performance with teacher certification from the University of Michigan. He is a member of Phi Mu Alpha Sinfonia Fraternity, the Michigan School Band and Orchestra Association and the College Band Directors National Association.

Previous experiences include a seven-year appointment as director of bands at Dwight Rich Middle School in Lansing, Mich., where he also taught middle school band, music appreciation and elementary general music. Duncan served as the music director and conductor of the Flint Youth Wind Ensemble, one of several youth ensembles in the Flint School of Performing Arts.