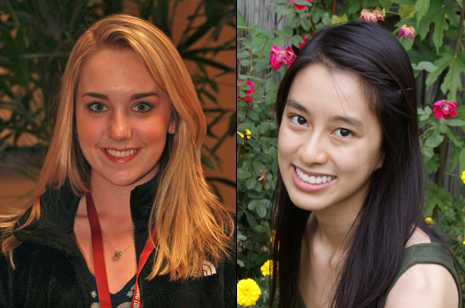 FAYETTEVILLE, Ark. – The J. William Fulbright College of Arts and Sciences at the University of Arkansas has selected five incoming freshmen to receive the university’s prestigious Sturgis Fellowships.

The 2011 Sturgis class boasts an average of a 34 composite on the ACT and a 4.0 high school grade point average; it includes four National Merit Semifinalists and one National Merit Commended Scholar.

“This class of Sturgis Fellows once again represents some of the most accomplished students in Arkansas and in the world. They are National Merit semifinalists, extraordinary volunteers in their communities and exemplary students,” said William Schwab, dean of the J. William Fulbright College of Arts and Sciences at the University of Arkansas.

The Sturgis Fellowship is the University of Arkansas’ oldest fellowship and is unique because it requires the students to pursue a major in Fulbright College. Students must also complete the rigorous Scholars Program and graduate with honors. The Sturgis Fellowship is made possible by an endowment from the Roy and Christine Sturgis Charitable Trust of the Bank of America. Each Sturgis Fellow receives $50,000, $12,500 per year, making it one of the most lucrative scholarships offered by any university in the country. The fellowship pays for tuition, room and board, and provides discretionary funds for necessary items such as computers, musical instruments, professional journals and trips to conferences.

Caroline Chen is a first-ranked graduate from Southside High School in Fort Smith. She plans on pursuing a degree in the natural sciences and pre-medical studies. In high school, Chen participated in the orchestra as a violinist, Key Club, student council, astronomy club, science bowl and quiz bowl. She was active in the community, volunteering for organizations such as St. Edwards Mercy Medical Center, Fort Smith Symphony and the Janet Huckabee Nature Center. Her parents are Sity Chen and Sarikun Tjandra.

Dorothy “Jet” Currey is a graduate of Lake Hamilton High School Hot Springs. She will major in biology, chemistry and pre-medical studies. At Lake Hamilton High, Jet participated in student council, Spanish Honor Society and band. She has played the piano and studied Tae-kwon-do since the second grade. Jet has been an active volunteer for the Salvation Army, World Changes Organization and the Praise and Worship Team at Crossgate Church. Her parents are Les and Mary Currey.

A graduate of homeschooling, Carson Leavitt, from Durango, Colo., plans to major in the natural sciences and pre-medical studies. He is a Sunday school teacher, Boys and Girls Club math and science tutor and a volunteer cook at Cross Bar Youth Ranch. He also participates in the choir and worship band at the First United Methodist Church and gives private music lessons in voice, guitar and piano. His parents are Ken and Karen Leavitt.

Nattapron Tun, from Edward S. Marcus High in Flower Mound, Texas, anticipates majoring in psychology, philosophy and pre-medical studies. In high school, she was an active member of student council, Rotary Club and the Science Honor Society. She has played the piano for nine years and practiced Thai classical dance for eight years. She is a volunteer at the Buddhist Temple in Dallas, a mentor at McAuliffe and Prairie Trails Elementary schools and a volunteer for the Special Olympics. Her parents areCindy and Aston Tun.

Reid Wahl, from Washington High School in Greenville, Miss., plans to major in psychology, philosophy and German. He was an active member of the Foreign Language Club, Key Club and the Mayor’s Youth Council in high school. He was also a member of the Envirothon and Mathematics Teams. His volunteer involvement includes peer tutoring in Spanish, Cypress Preserve clean up and participation in a Honduras mission trip. His parents are Robert and Debbie Wahl.

More than 500 students applied for prestigious fellowships at the University of Arkansas in 2011, and selections were based on a rigorous application that included an academic resume, essay, book list, letters of recommendation and high school transcripts. Finalists were invited to campus for interviews, and five students were chosen from that group to receive the Sturgis Fellowship.

Professor Sidney Burris, director of the Fulbright College Honors Program and chair of the selection committee, said “The interviews this year were extraordinary; I regarded them, in fact, more as intelligent conversations than interviews, and as always I came away from them having discovered a book or two that I need to read. Of course, our final choices were difficult; the spectrum of talent was a wide and diverse one; and this diversity and talent will be amply represented by the wonderful group that is arriving here in the fall.”

For more than 20 years, the Sturgis Fellowship has allowed exceptional students to receive a top-tier education, compete for and often win national awards, and gain admission into prestigious graduate and professional schools.