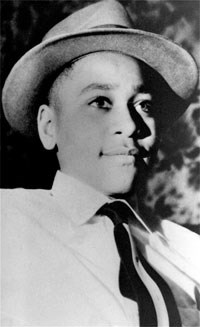 FAYETTEVILLE, Ark. — In 1955, 14-year-old Emmett Louis Till allegedly wolf-whistled at a white woman while he was visiting Money, Miss. Till was later abducted, brutally beaten and shot to death for addressing a white woman in public, triggering one of the first events of the Civil Rights Movement, when his alleged abductors were acquitted by an all-white, all-male jury.

More than 50 years later, filmmaker Keith Beauchamp has turned an obsession about Till’s unsolved murder into a riveting documentary, becoming the impetus for the reopening of the Till murder investigation. This documentary film, “The Untold Story of Emmett Louis Till,” will be shown at 11 a.m. and 6 p.m. Thursday, April 13, in the University of Arkansas Union Theater as part of the Hartman Hotz Distinguished Lecture Series, a collaboration between the University of Arkansas Fulbright College of Arts and Sciences and the School of Law. Parking is available in the Union Parking Garage, accessible from Stadium Drive.

According to Beauchamp, many consider this event to be the true catalyst of the Civil Rights Movement. Ever since two of the alleged killers, J.W. Milam and Roy Bryant, were acquitted of murder, a maelstrom has ensued. News articles and editorials elicited a kidnapping charge for Milam and Bryant, until Sen. James O. Eastland, a staunch segregationist and plantation owner, leaked information about Till’s father to the press. Till’s father had been executed by the U.S. Army in 1945 for allegedly raping two Italian women and killing a third. As a result of his father’s execution, some historians allege a grand jury refused to indict Milam and Bryant on kidnapping charges, and both men were subsequently set free.

Only months after the murder, Look magazine published a story in which Bryant and Milam confessed to Till’s murder.

Thousands of letters of protest poured into the White House, and membership in the National Association for the Advancement of Colored People went up. Only months later, Rosa Parks refused to give up her seat and 26-year-old Martin Luther King Jr. called for a citywide bus boycott. The Civil Rights Movement was officially in full swing.

Since then, Bob Dylan has written a song about Till’s murder, and national interest has been continually revived. In the mid-eighties, Stanley Nelson interviewed Till’s mother, Mamie Till-Mobley, who had ordered an open-casket funeral for all the world to witness the brutality inflicted upon her teenage son. A number of other programs and documentaries have aired since.

Yet what makes Beauchamp’s film unique is that it documents unprecedented first-hand accounts by eyewitnesses, many of whom are speaking out for the first time - accounts that reopened the investigation in May of 2004.

“It was Beauchamp’s nine years of investigation, summarized in the film, that was primarily responsible for the Justice Department reopening the case,” said Roger Ebert of the Chicago Sun Times.

According to ABC World News Tonight on May 6, 2004, “Keith Beauchamp may have helped solve a mystery buried for half a century.”

Beauchamp has worked with both the U.S. Attorney’s Office in Mississippi and the U.S. Justice Department to provide new evidence, including 10 eyewitnesses to Till’s murder or kidnapping, half of whom are still alive and who are interviewed in the documentary.

On June 1, 2005, Till’s body was exhumed and the bullet that killed Till was found. Later that year, the “Till Bill” was passed by the U.S. Senate to form a new federal unit within the U.S. Justice Department to probe closed Civil Rights cases. When the federal investigation is complete, the findings will be turned over to the district attorney’s office in Mississippi.

Beauchamp said he was just 10 years old when he came across an issue of Jet magazine picturing Till’s body, which he said greatly affected him. As a young boy in Baton Rouge, La., Beauchamp had his own share of run-ins with racism, but it wasn’t until an incident during which he was assaulted by an undercover police officer after dancing with a white woman that he felt compelled to leave college and move to New York in pursuit of his dream of being a filmmaker. He said he decided to attempt to remedy some of the past and present injustices of the Southern mindset by devoting almost a third of his life to pursuing justice for Till.

To read more about the documentary, to view the theatrical trailer online or to purchase the film, visit http://www.emmetttillstory.com/.