Clark Family Gives Back to University of Arkansas Libraries 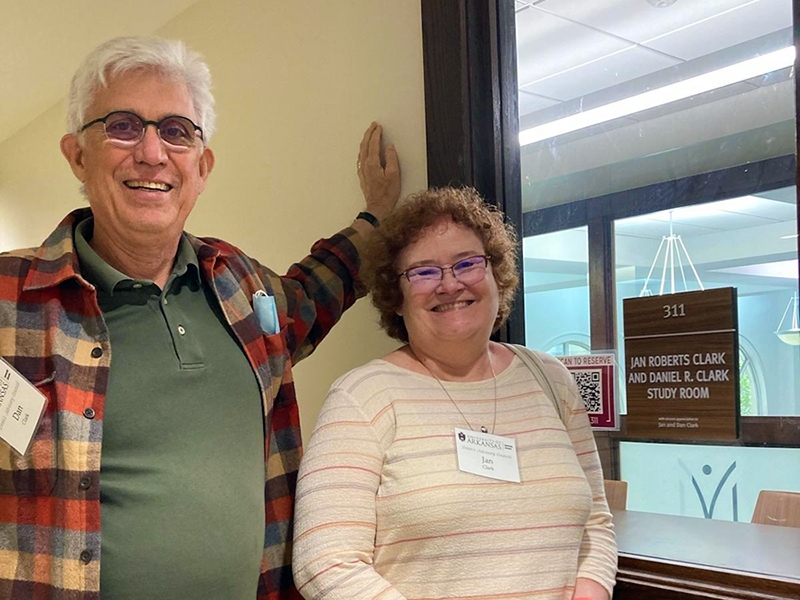 Jan and Dan Clark pose in front of the library study room named in their honor in April 2022.

University of Arkansas alumni Jan Roberts Clark and Daniel R. Clark of Houston believe that learning is a lifelong experience. To help foster that experience for students, the couple is contributing $100,000 to support the University Libraries.

Their planned gifts will create the Jan Roberts Clark and Daniel R. Clark Endowment for University Libraries and will enable the acquisition of materials that support university-wide scholarship and research.

Jan Roberts Clark has always had a love of reading and, as a young person, imagined herself working in a library one day. In 1971, with a newly earned bachelor’s degree in English from the U of A, she fulfilled that childhood dream by beginning her professional career at the University Library, now known as the David W. Mullins Library.

“It’s paying it forward, but especially for Jan, it’s paying it back,” said Dan Clark. “The folks at the library in those early years were wonderful to her after she graduated and before we launched a different career together in oil, gas and energy.”

In addition to this gift, the Clarks’ support of the libraries also helped fund the current renewal of Mullins Library. Phase I of the major renovation began in 2019 and was completed in August 2021. In recognition of the Clarks’ financial support of the building project, a study room on the library’s third floor is now named the Jan Roberts Clark and Daniel R. Clark Study Room.

The Clarks visited the study room named in their honor when recently on campus for a meeting of the University Libraries Dean’s Advisory Council. “It was quite a thrill to see our name on a study room in the library!” Jan remembered. As they attempted to take a selfie with the name plate marking the room, it sparked a conversation with the curious group of students studying inside it. The interaction was a unique and humbling connecting point with current students who have directly benefited from their generosity.

When Jan worked at the library, she held a mid-level position that required a bachelor’s degree. She was interested in obtaining a master’s degree in library science to become a librarian, but the few schools that offered that degree were too far away. In the future, Jan hopes to see a library science program offered at the U of A. Should a school of library science be created under the University Libraries, the Clarks’ gift will help provide funding in support of the program.

“The Clarks’ generosity is nothing short of inspiring,” said Jason J. Battles, dean of the University Libraries. “While their Mullins renovation gift is the most external aspect of their support, the materials endowment will be a constant and recurring asset bolstering our ability to acquire the latest scholarly works to meet the research needs of the university. And, if the libraries’ future does include a program in library science, their gift will provide much needed funding for the education of future librarians. We’re grateful for their creative and dynamic giving.”

A Pine Bluff native and graduate of Watson Chapel High School, Daniel R. Clark earned a Bachelor of Science in Chemical Engineering from the U of A in 1975. He also took graduate courses in the Department of Industrial Engineering and learned under John L. Imhoff, the first department head.

The Clarks moved to Jan’s hometown of Lafayette, Louisiana, where Dan took a job as a petroleum engineer in the Gulf of Mexico and Jan began work as a landman, researching land grants, ownership and titles. Dan accepted a job with Marathon Oil, where he worked offshore of Scotland in the North Sea from 1982 to 1987.

After a move to Houston via a corporate transfer with Marathon Oil, Jan returned to her work as a landman until 2013 when she retired. Dan spent 13 years as a consultant to venture capital companies and entrepreneurs that needed assistance to finance projects on renewable energy, biofuels, biogas and solar energy.

About the University Libraries: Located in the heart of campus, the David W. Mullins Library is the university's main research library. Branch libraries include the Chemistry and Biochemistry Library, the Fine Arts Library, the Physics Library, and the Robert A. and Vivian Young Law Library. The Libraries provide access to more than 3.1 million volumes and more than 180,000 journals, and offer research assistance, study spaces, computer labs with printing and scanning, interlibrary loan and delivery services, and cultural exhibits and events. The Libraries' Special Collections division acquires, preserves, and provides access to materials on Arkansas and the region, its customs and people, and its cultural, physical, and political climate. Visit the Libraries' website at libraries.uark.edu to learn more about services and collections.