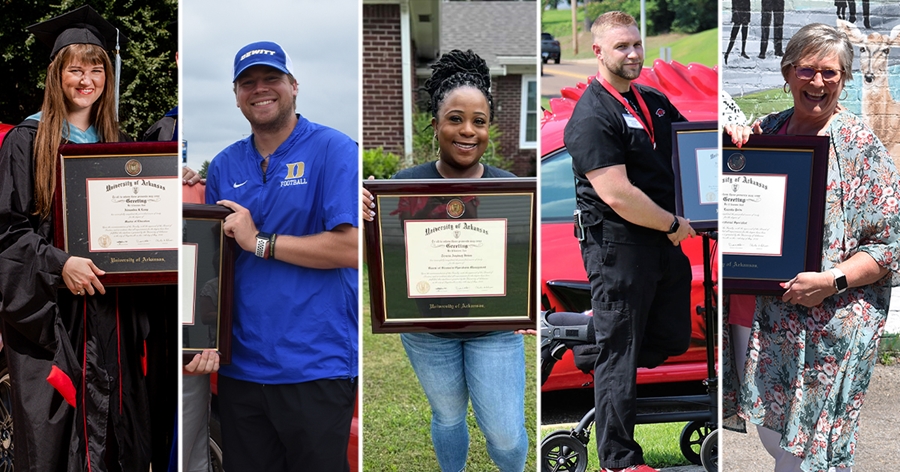 More than 440 U of A students graduated in May 2022 after studying in online degree programs. Pictured above are five of those graduates (left to right): Alexandra Lemp, Jacob Qualls, Anginay Jones, Austin Kersey and Leanita Pelts.

The U of A ranked 20th in the nation and earned a five-star rating in Newsweek’s 2022 student-focused ranking of colleges and universities that offer degree programs online.

Online undergraduate and graduate students evaluated their institutions by rating their overall experience, overall satisfaction and to what extent they would recommend their institutions, according to the methodology listed on Newsweek’s website.

The U of A ranked higher than Arizona State University Online at 47, Penn State World Campus at 136 and Purdue University Global at 195 in Newsweek’s “America’s Top Online Colleges 2023” ranking.

“The University of Arkansas invests in the success of its students, whether they study online or on campus,” said Cheryl Murphy, vice provost for distance education. “Our online students gave the U of A high marks in this survey, indicating that they value the U of A’s dedication to academic excellence and quality student support.”

This was the second year Newsweek published the “America’s Top Online Colleges” rankings. Last year, the U of A ranked 11th among 150 institutions, which was 50 fewer than were ranked this year. In the inaugural year, Newsweek weighted the survey of students at 70 percent with institutional indicators making up the remaining 30 percent of the score weight.

The Integrated Postsecondary Education Datasystem, also known as IPEDS, does not separate online learning from distance learning, which is defined as education that uses technology to deliver instruction to students who are separated from the instructor, according to a National Center for Educational Statistics blog.

Among public higher education, about 96 percent of all four-year institutions offered either distance education courses or degree programs in academic year 2018-2019.

In academic year 2020-21, more than 14 million students studied at a distance, with more than 8.6 million enrolled exclusively in distance education courses, according to a data table provided by the National Center for Educational Statistics.

Statista, in partnership with Newsweek, surveyed more than 9,000 online learners across the nation between June 20 and Aug. 29, according to Newsweek.

Survey participants rated their experience, their satisfaction and to what degree they would recommend their institutions with score weights of 50 percent, 20 percent and 10 percent, respectively, according to the methodology. The remaining 20 percent of the score weight was based on institutional indicators: graduation statistics, reenrollment rate, students per instructor and expenditures per student.

Statista divided findings into two ranking groups, based on institution type. The first group, “America’s Top Online Colleges,” ranked 200 colleges and universities, including the U of A, that offer online and hybrid degree programs. Hybrid programs use both online and in-person learning environments. The second group, “America’s Top Online Learning Providers,” include 32 institutions that are not colleges or universities.

Institutions with a final score value above the median score of all 200 institutions were given five-star ratings.