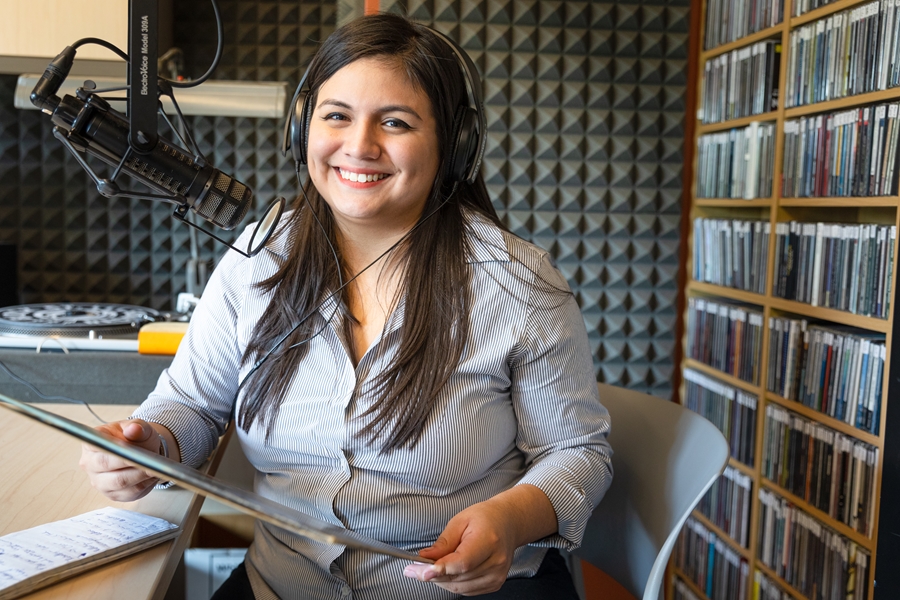 Rachell Sanchez-Smith dreamed of being a reporter ever since she studied journalism at Rogers High School.

“I was the weird newspaper kid,” she said. “And I wore that title proudly!”

The daughter of a Peruvian immigrant, Sanchez-Smith has always been interested in human rights and politics. She participated in the University of Arkansas’ Lemke Journalism Project, an annual newspaper program for Northwest Arkansas high school students interested in writing about diversity issues, but she didn’t think becoming a reporter was something she could do beyond high school.

However, when she got her first freelancing job at age 18, she realized that she could get paid to do what she loved. She thought, “This is it! I found it! This is what I’m meant to do.”

That freelancing job – translating interviews from Hispanic poultry workers for the non-profit magazine Facing South – led to her taking a data journalism class at the U of A.

The class, taught by former professor Rob Wells, completed a survey of who was affected most by COVID-19, and found that poultry workers – the same ones Sanchez-Smith had interviewed – were that population.

“We both had this ‘a-ha’ moment; this was what we needed to focus on.”

She joined a reporting team with Howard News Service and the University of Maryland to report on the state of immigrant food workers during COVID-19. Their outstanding work led to the fulfillment of her dream to be published by the AP – and to national recognition, winning the Society of Professional Journalism’s national Mark of Excellence Award for collaborative reporting.

She credits the Lemke Project for making that happen.

“Opportunities like that would have never come my way without the professors I met at the Lemke Project,” Sanchez-Smith says.

After high school graduation, Sanchez-Smith wanted to attend an out-of-state university, but her former mentors at the Lemke Project convinced her otherwise.

She says that professors Gina Shelton, advanced instructor of journalism; Bret Schulte, associate professor of journalism; and now-retired professor Gerald Jordan assured her that while she could go to another school for journalism, no other school would support her as much as the faculty at the U of A’s School of Journalism and Strategic Media.

“They really set it in cement,” she says. “No one would treat you like we do here.”

In the end, she says, “I knew I needed to be at the University of Arkansas.”

Now a double major in news-editorial journalism and political science, Sanchez-Smith also works as a reporter and producer for KUAF.

She also volunteers with the Lemke Journalism Project to help high school students “in making those same vital connections that allowed me to make a college career feasible and an outstanding experience.”

From academic counseling to job applications to personal advice, she says, the faculty at the U of A has been instrumental to her professional and personal success these last two years.

“I would not be here without the help of the faculty,” she says. “Not only have they been vital to my college journey, but these are people that I hope to keep around for the rest of my life.”

For more student success stories like Rachell's, check out our other #MyPathToSeniorWalk features on social media: Erick Soto, Kennedy Hicks. Many more stories are to come this year. If you have story that you'd like told or know someone that has an inspiring story, please check out the nomination form.