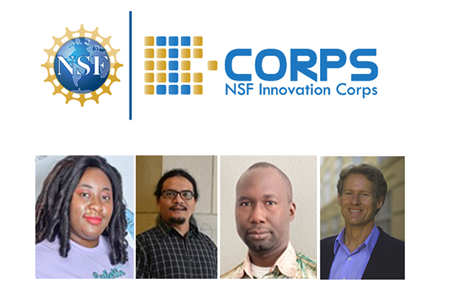 The team, called 3D Copper, also was awarded the I-Corps program's New York I-Corps Hub Spirit Team Award in recognition of its effort and commitment to the program.

Organized and sponsored by the foundation, the I-Corps program prepares student teams in commercializing their research by learning about topics such as customer discovery, value propositions and revenue streams.

The 3D Copper team included Ph.D. students Mireille Sandjong and Fred Felizco as entrepreneurial leads, McCann as the technical lead and alumnus Wendyam Traore as the team's mentor. 3D Copper is developing the electric motor and controller through use of copper additive manufacturing, also known as metallic 3D printing.

A group of six instructors with the New York I-Corp Hub led 26 teams from research universities throughout the U.S. during the seven-week program starting in July and finishing in early September.

Each team was required to interview at least 100 industry professionals related to all aspects of commercialization, such as distribution channels, suppliers, pricing and intellectual property. After an initial week-long workshop, the 26 teams met weekly to present their results and develop their commercialization plans.

3D Copper plans to move forward in commercialization by exploring other funding opportunities such as the National Science Foundation's Partnerships for Innovation.