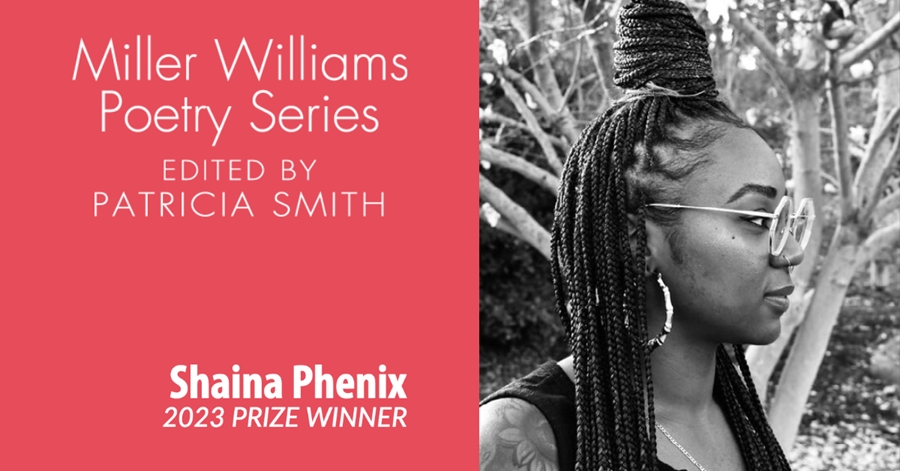 The University of Arkansas Press is pleased to announce that the 2023 Miller Williams Poetry Prize has been awarded to Shaina Phenix by series editor Patricia Smith. The poet will receive a $5,000 cash prize, and her manuscript To Be Named Something Else will be published in the Miller Williams Poetry Series in the spring of 2023. For almost a quarter century, the press has made this series the cornerstone of its work as a publisher of some of the country's best new poetry. The series and prize are named for and operated to honor the cofounder and longtime director of the press, Miller Williams.

"So perfect to have Patricia Smith — whose work I look to for reflection, music, permission, communion and sermon — be a catalyst for getting these poems out into the world," said Phenix about the selection of her manuscript. "I am honored to know that the poets who proceed me in this series have made the noise, taken the risks, stuck to their guns and documented what might not otherwise be recorded. I know that my book is in good company."

Phenix's manuscript To Be Named Something Else may present like a mere collection of poems, but it is a cookout, a waiting room, a party, an abortion clinic, a hair-braiding shop, a church house, a bodega, a heaven, a nightclub restroom, a funeral, a cotillion, a birthing room. It is also a call-and-response where there is always a Black someone asking, a Black someone answering — and always centering a kind of coming-of-age and a kind of being for Black femmes in Harlem and other urban landscapes. They pull from and are in conversation with pop culture, oral histories as told by elders, hip-hop and R&B, spoken and overheard language, inherited and invented poem forms and the spirit of Black Baptist tradition. But most importantly, these poems give voice to the echoes of so many female writers of color who have come before.

"I love poems that vivify and disturb," says series editor and prize judge Smith. "No matter what genre we write in, we're all essentially storytellers — but it's poets who toil most industriously, telling huge unwieldy stories within tight and gorgeously controlled confines, stories that are structurally and sonically adventurous, and it's magic every time it happens."

In addition to selecting Phenix's To Be Named Something Else, Smith chose as finalists for the 2023 Miller Williams Poetry Prize Jessica Poli's manuscript Red Ocher and L.J. Sysko's manuscript The Daughter of Men, both of which will also be published in the spring of 2023. In Poli's Red Ocher, the poems explore the cyclical natures of love, desire and grief in a balanced voice. In Sysko's The Daughter of Man tells the story of womanhood from the perspective of different stages of life—a constellation of reminisces, of childhood glimpses of shadows playing a sisters' game through a maiden's heart-wrenching coming to age.

Shaina Phenix is a Black queer writer and educator from Harlem. The recipient of the Jay C. and Ruth Halls Poetry Fellowship at the University of Wisconsin-Madison, she is assistant professor of English at Elon University.

Jessica Poli is the author of four chapbooks and coeditor of the collection More in Time: A Tribute to Ted Kooser. Originally from Pennsylvania, Poli is now a Ph.D. candidate at the University of Nebraska-Lincoln.

L.J. Sysko is a high school English teacher and director of executive communications at Delaware State University. The recipient of several Dorothy Sargent Rosenberg awards as well as an Academy of American Poets prize, she serves as a member of the Delaware State Arts Council.

Patricia Smith has been called "a testament to the power of words to change lives." She is the author of seven books of poetry, including Incendiary Art (2017), winner of an NAACP Image Award and the Kingsley Tufts Poetry Award; Shoulda Been Jimi Savannah (2012), which won the Lenore Marshall Prize from the Academy of American Poets; Blood Dazzler (2008), a chronicle of the human and environmental cost of Hurricane Katrina which was nominated for a National Book Award; and Teahouse of the Almighty, a 2005 National Poetry Series selection published by Coffee House Press.