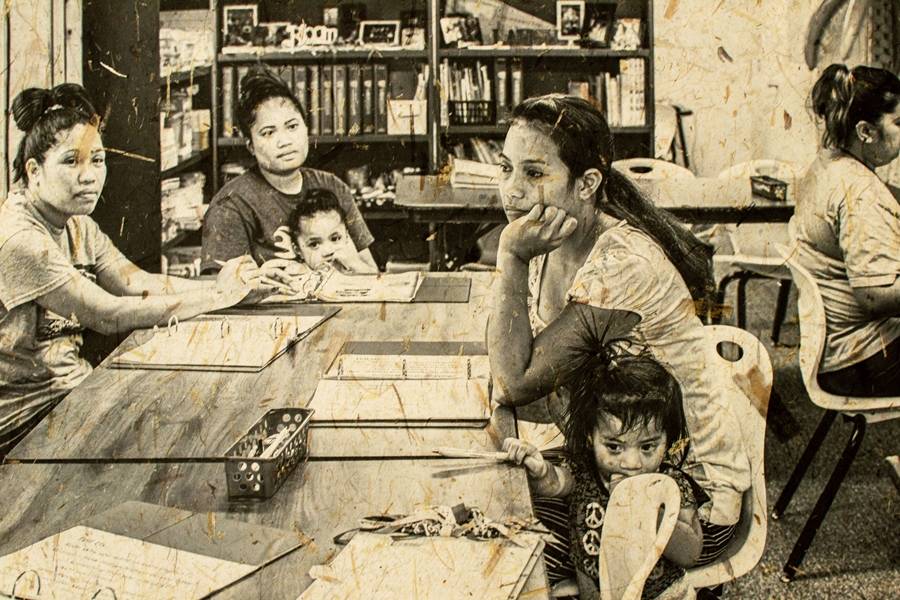 Image from the Lawrence Sumulong Photographs of the Marshallese Diaspora in Springdale, Arkansas, collection (MC 2557).

A collection of photographs of the Marshallese diaspora in Springdale, Arkansas, by documentary photographer Lawrence Sumulong is now available to researchers in the University Libraries Special Collections Division. Northwest Arkansas represents the largest population of Marshallese people in the continental United States.

"As part of a land-grant institution, our mission in Special Collections is to preserve and provide access to materials documenting all communities and aspects of life in Arkansas," said Melanie Griffin, interim associate dean for Special Collections. "These prints, which Collections Management and Processing Unit Head Katrina Windon worked to acquire over the past two years with former Associate Dean Lori Birrell, document stories not yet told through Special Collections' holdings. Ms. Windon also led important efforts to coordinate with the Marshallese community and to engage the services of a community leader, Sosylina K. Maddison, to translate the finding aid into Marshallese. This work should be completed later this year, making the materials more accessible to the community that the collection documents. It is an honor for us to steward this collection of photographic prints and provide important research and educational access to materials documenting a community that has previously been unrepresented in our holdings."

Sumulong is a Filipino American photographer and a member of Indigenous Photograph, currently based in Brooklyn, New York.

Commercially, he has photographed for institutions like Carnegie Hall, Jazz at Lincoln Center, Lincoln Center for the Performing Arts and Sony Music Masterworks.

His personal projects include the documentation of emerging Asian and Pacific Islander communities in the United States, as well as Philippines-focused projects such as Burying the Lead (2015), which focused on Typhoon Haiyan refugees living with their incarcerated family members in the Leyte Provincial Jail; Trapo (2016), a series of polaroid emulsion lifts of Filipino political posters; and an absurd retrospective about the city of Manila called Dead to Rights (2019). His work has been featured in publications such as The Washington Post, The Guardian and The New York Times.

Initially exhibited by curator Patrick Flores at the Jorge B. Vargas Museum, his series Urban Legend (2012) was also selected by curator Clara Kim (Tate Modern, MOCA) for the Gwangju Biennale in 2018.

The photographs were created in 2016 and 2017 and printed in 2021 with archival pigment on banana fiber paper, a means of connecting Sumulong's Filipino heritage to a crop also endemic to the Marshall Islands. The prints were made from digital negatives by LTI / Lightside Photographic Services in Manhattan, New York, and all are signed first editions.

Funding for this first-run print edition came from the Honors College; the Division of Diversity, Equity and Inclusion; and several of the libraries' funds for collection acquisition.

Special Collections strives to represent a diversity of voices and experiences through its holdings. This collection is a way to honor and help preserve the culture and traditions of the Marshallese community in Northwest Arkansas.

A note from the photographer:

"I am profoundly grateful to both the Marshallese-Bikinian community of Springdale, Arkansas, and the University of Arkansas for allowing me to document and later preserve a certain moment in time that is significant on the local, state and national level.

"The impetus of my work is to remember and express a connection. The understanding is that these photographs will eventually outlive us, but I hope they don't simply show a detached observer chronicling.

"The idiosyncrasies of the paper render a documentary story and photojournalistic imagery as personal and specific in tone. I am not of the community nor the locale, but was invited to engage and learn during a window of time. These photographs represent that intersection and aperture, so to speak.

"Lastly, the oral history and context attached to a number of the photographs convey aspects of American life and legacy that need to be rectified and continually reconciled. I believe the meaning of this series lies squarely in the community it portrays."