Arkansas Fruit Breeder to Be Awarded by American Pomological Society for Outreach, Service 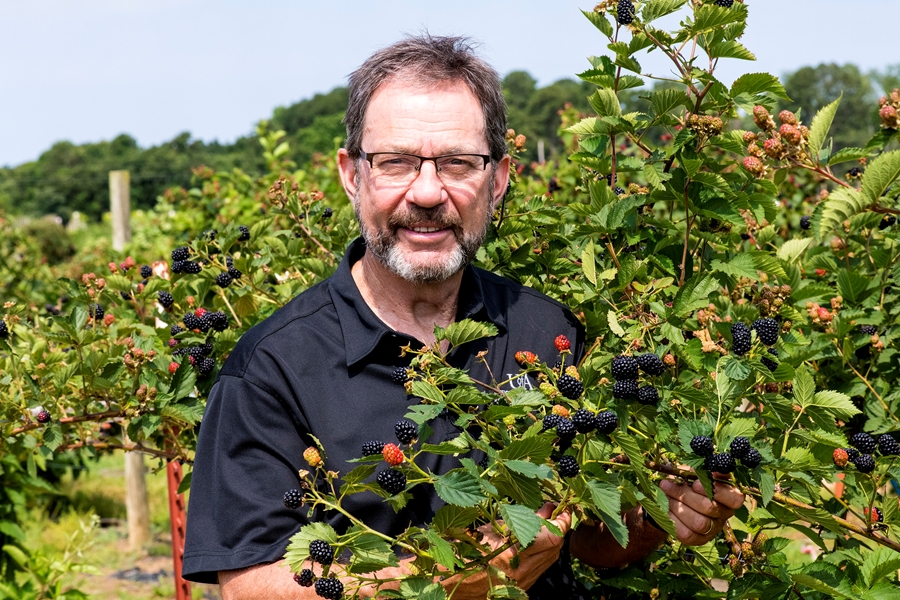 U of A System Division of Agriculture photo by Fred Miller

John R. Clark, distinguished professor of horticulture with the U of A System Division of Agriculture, will be awarded the 2022 Chad Finn Ambassador Award by the American Pomological Society in August.

The American Pomological Society will bestow one of its top honors to an Arkansas Agricultural Experiment Station fruit breeder and researcher in August.

John R. Clark, distinguished professor of horticulture with the U of A System Division of Agriculture and Dale Bumpers College of Agricultural, Food and Life Sciences, is being awarded the 2022 Chad Finn Ambassador Award by the oldest fruit organization in North America.

"This is a fabulous honor because it honors my close personal friend Chad Finn," Clark said. "We spent over 30 years working and having fun together in fruit breeding. It's a joy to be associated with his name."

The Chad Finn Ambassador Award was established in 2020 by the American Pomological Society in honor of Chad Elliot Finn, a research geneticist and small fruit breeder who worked at the U.S. Department of Agriculture Horticultural Research Crop Unit in Corvallis, Oregon, from 1993 until his passing in 2019. The award is bestowed on those who have made significant contributions to pomology, especially in outreach and service.

The award will be presented to Clark at the American Society for Horticultural Science annual conference, held this year in Chicago between July 30 and Aug. 3. It is just the second time the award will be given. The first recipient was Bernadine Strik of Oregon State University's department of horticulture in Corvallis.

Although primarily a fruit breeder and researcher, Clark grew into a well-known speaker and presenter on fruit breeding because of requests for information on the varieties he and his colleagues developed with the Division of Agriculture.

Margaret Worthington, assistant professor of fruit breeding and genetics with the experiment station, said Clark has a fun and engaging storytelling style that makes him a highly sought-after speaker for growers' associations, industry meetings and academic conferences.

"Dr. Clark has no formal extension appointment. However, he is always willing to answer calls and emails from growers and even home gardeners," Worthington wrote in a nomination letter.

"It's a little bit of a business decision but also just being courteous," Clark said of his call-backs to growers and gardeners, both in-state and out-of-state. "I hold fast to that. Almost 42 years have gone by, and I'm always learning. I usually get a story about it, too. If someone asks me something, I'm going to answer them as best I can."

Clark said he stops short of giving advice that should come from a Cooperative Extension Agent, such as pH and fertilizer recommendations. And although the fruits he has developed are varieties for Arkansas growers, he said they are used worldwide.

Worthington, who nominated Clark for the award, noted that Clark has given nearly 700 formal presentations throughout his career and regularly hosts industry groups at the experiment station's Fruit Research Station in Clarksville. Clark also composes guitar tunes to accompany many of the new fruit cultivar releases, starred in about 30 YouTube videos describing Arkansas fruit breeding innovations and is a recurring columnist for American Fruit Grower/Growing Produce, she added. Clark has also authored hundreds of peer-reviewed and popular press articles and 12 book chapters. Many of those works, Clark said, were co-authored with Finn.

"Chad was a close professional friend and a close personal friend," Clark said. "Chad had a big ol' laugh, and he could make a lot of racket with it.

"We had the two largest public blackberry breeding programs, so that was our common bond. But we also were close friends and did a lot of writing together over the years," he said.

One of their most significant writing collaborations was a chapter in the Plant Breeding Reviews book series that Clark calls "the most complete documentation on blackberry breeding." They also traveled the world together to attend fruit grower meetings.

Among the many who nominated Clark for the award was David Karp, assistant specialist in the Department of Botany and Plant Sciences at the University of California-Riverside. Karp, a fruit and food journalist, likened the nomination to recommending Michael Jordan for the NBA Hall of Fame.

"Many, perhaps most, fruit breeders work their whole lives without producing any varieties that truly make a difference," Karp wrote. "Cultivars that really change the game for a fruit or nut are few and far between. Dr. Clark has been so alert, skilled and fortunate that he has truly revolutionized two major crops: grapes and blackberries."

Extension and research professor Eric T. Stafne of Mississippi State University, who also collaborated with Clark and Finn on the Plant Breeding Reviews blackberry chapter, said in his nomination letter that "if there is a more outstanding spokesperson for small fruits than John Reuben Clark, then I would like to meet that person, but I seriously doubt they exist."

Stafne was working on his master's degree at the U of A in 1997 when he watched as Clark, Jim Moore and Jose Lopez-Medina walked the field and selected what would become the trademarked Prime-Jan and Prime-Jim, the first primocane-fruiting blackberry cultivars. Karp said these cultivars that produce fruit on first-year wood make it possible to grow blackberries in areas where they could not have flourished before and enable them to be produced year-round.

"Countries all over the planet were now demanding blackberry cultivars originating in little ol' Clarksville, Arkansas, all due to John's willingness to invest his energies into getting them into the marketplace," Stafne wrote. "Being a gregarious fellow helped burgeon his reputation around the world — and his folksy, 'Mayberry'-like colloquialisms didn't hurt either."

Keith Striegler, grower outreach coordinator for E. & J. Gallo Winery in Acampo, California, said Clark's publication record reflects his commitment to communicating research results to the scientific and grower communities. But Clark can relate to growers and the general public, which makes him stand out, Striegler said.

"He has an excellent rapport with growers on a one-to-one basis and in presentations at meetings," Striegler stated. "John knows how to listen to growers and understands the issues confronting them. He has the ability to effectively convey information to them."

Striegler was the fruit extension specialist at the Division of Agriculture from 1998 to 2003.