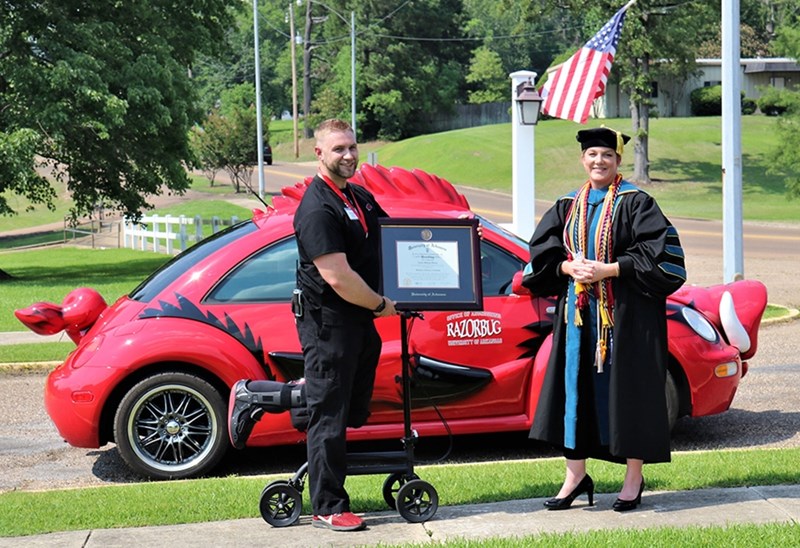 Austin Kersey of El Dorado, left, receives a framed diploma Thursday for his bachelor's degree in nursing from Sarah Bemis, assistant director of the Eleanor Mann School of Nursing at the U of A.

Austin Kersey of El Dorado has been a Razorback fan since he was a little kid. He proposed to his wife at a Razorback game tailgate five years ago. And now, he can hang his U of A diploma in their home.

In his excitement on June 4, when Jalen Battles hit a grand slam home run against Oklahoma State, Kersey jumped up, landed wrong and broke four bones in his left foot. Two days later, Kersey started a new job as director of nursing at Hudson Memorial Nursing Home in El Dorado.

He was promoted to the position after he studied online and earned a Bachelor of Science in Nursing degree from the Eleanor Mann School of Nursing at the U of A.

"Not only am I a University of Arkansas graduate now, I'm a diehard Razorback fan," Kersey said. "This feels like a big accomplishment. My ultimate goal was to be director of nursing for a long-term-care facility."

Kersey was one of more than 440 students who studied in online degree programs and applied for graduation at the U of A in May.

Kersey was using a scooter to get around with his walking cast when the RazorBug Diploma Tour arrived Thursday at the nursing home for a ceremony in which Sarah Bemis, assistant director of the Eleanor Mann School of Nursing at the U of A, presented Kersey with a framed diploma. She also gave him the traditional pin that baccalaureate graduates in nursing receive in a separate ceremony the evening before U of A spring commencement.

U of A faculty and staff members traveled throughout south Arkansas last week to present diplomas to some of the recent graduates who earned degrees in online programs. The tour continues this week in the River Valley.

The RazorBug is a converted red Volkswagen Beetle that sports a Razorback snout, tail and razor-edged spine. It has been used for recruitment and special events since 2005.

Staff of the facility accompanied nursing home residents, some using wheelchairs and many in Razorback red blouses or T-shirts, outside to gather for pictures with Kersey in front of the RazorBug. The nursing home presented Kersey with a Razorback-decorated cake and other refreshments when the group moved back inside.

Carolyn Merritt, administrator of the nursing home, said the residents were excited to celebrate with Kersey.

"They've been cooped up for two years because of COVID precautions," she said. "Anything that brings joy to them is perfect for us."

Kersey earned his LPN associate's degree from South Arkansas Community College in El Dorado. He started out working in critical care, but, after his first job working with elderly people, he decided that was his calling. He supervises a staff of about 60 at the nursing home.

"When I walk in every day and see people laughing and smiling, it makes me feel part of the family," he said. "For some of them, we are their family."

For others considering an online degree program, Kersey said the flexibility can make it doable for working people who have families.

"If you are self-motivated, it's better than going to class from 8 to 3:30 every day," he said. "I worked full time, and we had a newborn when I started. It was very convenient to do online. You can study and work. I really do recommend this program."

The tour was organized by the U of A's Global Campus. The Global Campus works with academic colleges to offer more than 75 online degree, certificate, microcertificate and licensure programs. For more information about U of A ONLINE, please visit online.uark.edu.