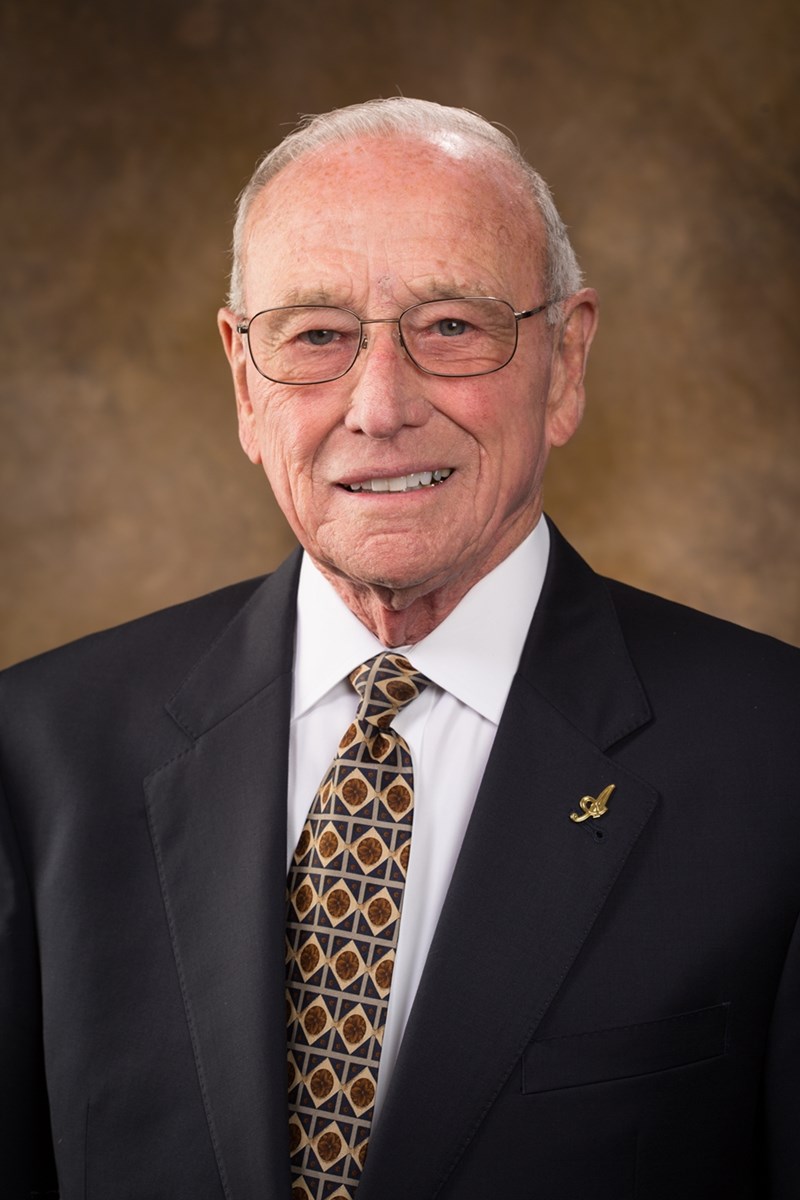 On May 4, 2022, Wallace Fowler, a former U of A student who went on to become one of Arkansas’ most influential executives, passed away, just two weeks after his wife of 65 years, Jama.

Wallace was born in Manila, Arkansas, and enrolled in the U of A in 1954. After attending the U of A, Wallace enlisted in the Army and shortly thereafter met his future wife, Jama. While serving in the U.S. Army, he was assigned to work as a dental lab technician at the 98th General Hospital in Neubrucke, Germany. During that time, the Fowlers traveled extensively throughout Europe.

After returning from Germany, the Fowlers first settled in Little Rock and began several business ventures together as a team. In Little Rock, Wallace joined Haverty Furniture and Dillards. In the mid 1960s the couple moved to Jonesboro to develop Fowler Furniture, eventually opening stores in a number of Northeast Arkansas locations.

In 1969, Wallace sold his furniture stores and shifted his focus to the food industry, specifically owning Kentucky Fried Chicken restaurants. Together with other relatives, the Fowlers eventually owned 93 franchises.

From then on, Wallace and Jama ventured into banking and owned interests in several Arkansas banks. Eventually, former Governor Bill Clinton appointed Wallace to the Arkansas Industrial Development Commission, and in 2011, he was inducted into the Arkansas Business Hall of Fame.

Philanthropic endeavors were just as important to the Fowler family as their businesses. Together they supported several organizations that were important to them, including the U of A, with the Wallace W. and Jama M. Fowler House, the chancellor’s residence on the U of A campus, and the Fowler House Garden and Conservatory, which provide hospitality for university guests for a variety of campus celebrations and events. The Fowlers served on steering committees in two major capital campaigns: Campaign for the Twenty-First Century and Campaign Arkansas, and were members of the U of A Chancellor’s Society and Towers of Old Main.

“The care and support that Wallace and Jama had for the University of Arkansas is truly heartwarming and has made all the difference,” said Charles Robinson, interim chancellor. “Together, they supported causes and initiatives that left an indelible mark on our campus, and they will be missed and remembered by the entire university community.”

“Wallace was an incredible leader and champion of the University of Arkansas,” said Mark Power, vice chancellor for advancement. “He generously created opportunities for growth in the state of Arkansas and at the university that have touched many lives. We are grateful for his vision and extraordinary friendship. He will be deeply missed.”

The Fowlers had a great love for the Razorbacks and would travel to many of their away games. They supported Razorback Athletics with many generous gifts, which help fund the Fowler Family Baseball and Track Training Center, Donald W. Reynolds Razorback Stadium and the Road Hog Park. They also contributed to the Razorback Foundation Annual Fund and made other significant gifts.

“In the past few weeks, we have lost two dear friends of the Razorback program in Wallace and Jama Fowler,” said Vice Chancellor and Director of Athletics Hunter Yurachek. “Even as we continue to mourn their passing, their legacy will live on for generations to come thanks to their extraordinary investment in the lives of our student-athletes. We are eternally grateful for their generosity and transformational support.”

“Wallace was a visionary leader and supporter of Razorback Athletics,” said Scott Varady, Razorback Foundation executive director. “Wallace and Jama elevated and helped build our program throughout their lives, and we will always be grateful.”