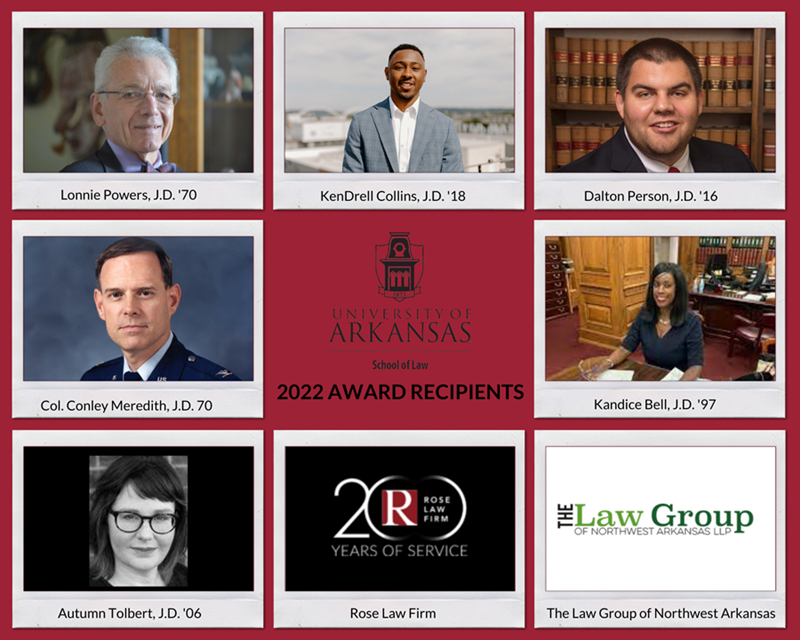 The U of A School of Law Alumni Society Board of Directors has announced the 2022 Commitment to Justice and Career Champion award recipients.

Powers graduated with his Juris Doctor from the U of A School of Law in 1970. He attended the LL.M. Program at the National Law Center of The George Washington University from 1977-79, focusing his studies on Land Use Management and Control. A nationally recognized director for thirty-five years of a statewide, non-profit organization providing funding and support to civil legal services programs, he has more than 50 years of policy and legal experience at the state and national levels, having devoted the majority of his career to establishing, building, sustaining and revitalizing legal aid organizations. In his role as executive director, Powers' primary responsibilities include increasing funding for civil legal aid; enhancing partnerships with the bar, the legislature, the judiciary and the public; and strengthening legal aid programs across the Commonwealth.

KenDrell Collins (J.D. '18) works to create an Arkansas that is more just and more equitable. He serves as a trial attorney at the Office of the Federal Public Defender for the Eastern District of Arkansas, which aims to ensure that no person is disadvantaged simply because of their inability to afford private legal counsel. Collins serves as a commissioner for the Arkansas Sentencing Commission. He is a board member for the New Leaders Council, where he currently serves as co-chair for the Institute/Curriculum and was a Fellow in 2020. He also serves as a board member for the Dunbar Historic Neighborhood Association and the Arkansas chapter of New Leader's Council. He was named as a Dowline Emerging Leader for 2019-2020. Additionally, he has played an integral role in the School of Law's Constitution Day program in Osceola, Arkansas, and serves on the Dean's Executive Advisory Board.

Dalton Person joined the firm of Jones Jackson Moll in 2017 following a term clerkship with U.S. District Judge P.K. Holmes, III. His practice includes commercial litigation, commercial transactions, business organizations, contracts, real estate and employment law. He advises small businesses and individuals alike in the initial organization and ongoing operations of their businesses. Person serves as a board member for Fort Smith Public Schools, Fort Smith Regional Chamber of Commerce, United Way of Fort Smith, First United Methodist Church of Fort Smith and Fort Smith Boys and Girls Club. He is actively involved in the Sebastian County Bar Association and served as the president of the organization in 2020-2021. In 2019, he was named to the "20 in their 20's" list by Arkansas Business and to the "Fast 15" list by Northwest Arkansas Business Journal. He was a member of Leadership Fort Smith in 2018.

Conley Meredith, from North Little Rock, Arkansas, began his military career as assistant staff judge advocate at Tyndall Air Force Base in Florida. During his military career, Meredith attended Squadron Officer School (1979), Air Command and Staff College (1981) and Air War College (1984). He retired as a colonel from the United States Air Force after completing over 27 years of active duty. At the time of his retirement, he served as the staff judge advocate at Air University. He earned his commission through the Air Force Reserve officer Training Corps program at the U of A. During his Air Force career, he served five times as a staff judge advocate. Meredith counts working with the outstanding men and women in our Reserve JAG and paralegal programs as the highlight of his active duty career. He also served as the staff judge advocate and central manager for the Air Force Reserve and judge advocate general program at the Air Reserve Personnel Center in Denver, Colorado.

Bell is a licensed attorney in the state and federal courts of Arkansas. While she has a background in the private practice of law, she has also devoted herself to public service in a variety of roles. Bell has been a legal aid attorney, an assistant city attorney, a special judge in district and circuit courts, and a special associate justice to the Arkansas Supreme Court. Bell is now in the executive branch of government where she has worked on projects to help preserve the shelter of low-income Arkansans during the COVID-19 public health emergency. As chair of the Arkansas Bar Commission on Diversity and Inclusion, she has accepted invitations to give presentations on public policy to K-12 public school teachers, President’s Leadership Class at Southeast Arkansas College, State agency interns, and the Arkansas Bar Association.

Autumn Tolbert's public service activities began while in law school, where she participated in the Innocence Project Clinic and clerked with the Public Defenders Office for the Fourth Judicial Circuit. Following graduation, she became a deputy public defender and served in Washington and Benton counties for six years. She then became a private practitioner and focused on criminal defense of indigent and immigrant populations, specifically the Marshallese community. Tolbert worked with other attorneys and organizations in the area in an attempt to end the 287(g) program in the Washington County jail. In her current role with the Good Shepherd Lutheran Church, Tolbert helps to coordinate legal clinics for the Marshallese congregants and assists with other projects such as the LGBTQ Teen Camp hosted by the church during the summer.

Rose Law Firm is dedicated to enhancing legal education and providing opportunities for students to work within the firm. Each year, Rose Law Firm provides externship and clerkship opportunities to students. They participate in on-campus interviews and a large percentage of their attorneys are U of A School of Law alumni. Many members of the firm have been guest lecturers in the classrooms. In addition to their volunteer service activities, Rose Law Firm is a generous financial supporter of the law school. In honor of the firm's 200th anniversary in 2020, the firm made a commitment to the U of A School of Law's Public Service initiative through a pledge to the law school. The funding will promote and provide experiential opportunities for students with public service and pro bono interest. The award will support two summer public service fellowships and an annual pro bono fellow at the School of Law for three years.

The Law Group of Northwest Arkansas has been a long-time supporter of legal education at the U of A School of Law. Founded by alumni, the firm has exclusively hired U of A School of Law graduates. Both K.C. Tucker and Kristy Boehler have served as adjunct faculty members and been huge supporters and contributors to the Food and Agricultural Law Program. The firm's financial support to the program has provided opportunities for students and administrative flexibility for the program's faculty.

To learn more about the alumni awards recipients, please visit this link.

About the Awards: The Law Alumni Society Board will recognize the 2021 and 2022 award recipients at the Awards Dinner on April 9, 2022, during the School of Law Alumni Reunion Weekend. For more information about the awards, recipients or to submit a nomination, please visit https://law.uark.edu/alumni/alumni-awards.php.

About the University of Arkansas School of Law: The law school offers a competitive J.D. as well as an advanced LL.M. program, which are taught by nationally recognized faculty. The school offers unique opportunities for students to participate in pro bono work, externships, live client clinics, competitions, and food and agriculture initiatives. The school strives to identify, discuss, and challenge issues of race, color, ethnicity, and the impact(s) they have on students, faculty, and staff members in an effort to achieve a diverse, inclusive, and equitable community. From admitting the Six Pioneers who were the first African American students to attend law school in the South without a court order to graduating governors, judges, prosecutors, and faculty who went on to become President of the United States and Secretary of State, the law school has a rich history and culture. Follow us at uarklaw.