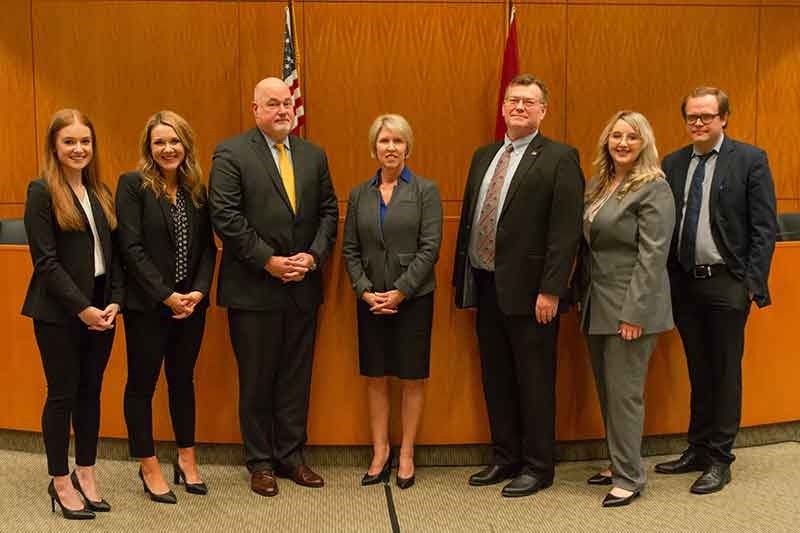 The Hon. Timothy Brooks of the United States District Court for the Western District of Arkansas; the Hon. John Threet of the Fourth Judicial Circuit of Arkansas; and Emily White, Attorney at Law at Caddell Reynolds law firm and a former district judge who has twice been appointed as Special Arkansas Supreme Court Justice, presided over the final round. Brooks and Threet are University of Arkansas School of Law alumni.

The championship, held Friday, Oct. 15, in the E.J. Ball Courtroom, concluded three weeks of the competition, which commenced on Sept. 27 with 16 teams jockeying for position in the knock-out rounds.  Each team competed twice in the Zoom-based preliminary rounds — once as the prosecution, and once as the defense. The results from these 16 matches determined which eight teams advanced to the in-person rounds that began on Oct. 4.

The competition was based on a murder charge — State of Hogville v. Taylor — where a local attorney is found dead in his office after a contentious civil trial results in a judgment notwithstanding the verdict in his favor. His opposing attorney from that case, local lawyer Kelly Taylor, is arrested for the murder.

Students Brian Thomas and Zachary Musgrove, members of the school's Board of Advocates, co-chaired the competition, which is one of several presented by the board each year. The Board of Advocates is a student-run organization that promotes the extra-curricular development of practical skills, in both oral and written advocacy, through practice and participation in both internal and external competition.

"Zac and I are really happy with the competition we were able to have this year," Thomas said. "We juggled multiple formats, had appearances by 58 different alumni and attorneys serving as judges, and were able to hold the final round in the courtroom, in front of an audience, and watched two really excellent teams put on a show."

Harris also won the Odom Law Firm Best Advocate Award, which was presented by the firm's partner Alan L. Lane at the Odom Law Firm Champions Reception immediately after the competition. Established in 1982, Odom Law Firm is an ever-changing firm, adapting to provide clients with the best representation in Northwest Arkansas and nation-wide.

"Hayley and I were incredibly honored simply to have the opportunity to speak in front of three judges, and that alone was a win in our books," Jackson said. "Advocating in the final round, for me, was the culmination of words of advice from my professors, words of encouragement from my parents and peers, and words of affirmation from my co-counsel and witnesses, Hayley Harris, Danielle Essary, and Gage Martin. Hearing Judge Brooks say our names as he read the winning ballot is a moment I will cherish forever!"

The Sutton Trial Competition is held annually and is named for William H. Sutton (1931-2015), a 1959 graduate of the University of Arkansas School of Law with a distinguished legal career that spanned more than five decades.