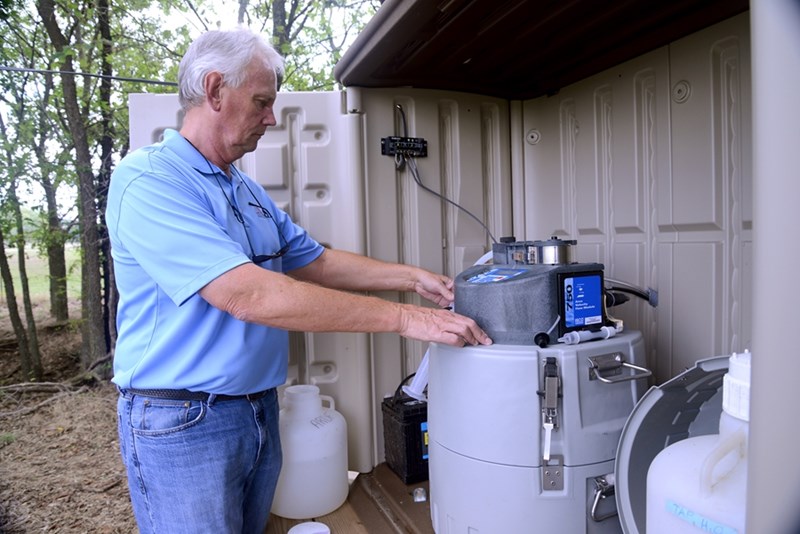 Andrew Sharpley, professor of crop, soil and environmental sciences, calibrates an automated water sampler for a sampling site along a stream on a Discovery Farm in Washington County. Sharpley retired in January 2021.

FAYETTEVILLE, Ark. — Andrew Sharpley, one of the founders of the Arkansas Discovery Farms Program, retired from his Arkansas Agricultural Experiment Station research post in January … mostly.

"I'm still doing some work," he said. "I'd call it a state of transition, I guess. There are still some projects going."

Sharpley retired as a Distinguished Professor in the Department of Crop, Soil and Environmental Sciences for the experiment station, the research arm of the University of Arkansas System Division of Agriculture, and the Dale Bumpers College of Agricultural, Food and Life Sciences at the University of Arkansas. His focus was — and still is — on conservation practices in agricultural production systems to preserve water quality.

The extended nature of Sharpley's transition to retirement may be because he has always enjoyed being part of a team.

"The team is greater than the sum of its people," Sharpley said. "The more memorable and rewarding things I've accomplished in my career were in teams — a diverse group of people working together."

Sharpley grew up in the suburbs of Manchester in northwestern England. His exposure to agriculture came during visits to relatives' dairy farms. His early intent was to be a marine biologist, but he discovered an interest in soil science in college. He earned a bachelor's degree in soil science and biochemistry, with a minor in oceanography, at University College of North Wales.

In 1978, Sharpley joined the U.S. Department of Agriculture-Agricultural Research Service as a post-doc soil scientist at the National Water Quality Management Laboratory in Durant, Oklahoma. While there, he also worked cooperatively with researchers at Oklahoma State University at Stillwater.

It was during his time in Oklahoma that a professor and mentor at Oklahoma State helped Sharpley get his green card and, in 1986, he became a U.S. citizen.

In 1995 he transferred to University Park, Pennsylvania, where he was a soil scientist for USDA-ARS and an adjunct professor and Graduate School member of the crop and soil sciences department at Pennsylvania State University.

After more than 20 years of doing mostly basic research for USDA-ARS, Sharpley said he was under a lot of pressure to move into a management position. "They wanted me to move to administration," he said. "But after serving as acting lab director for six months, I quickly realized that I wasn't cut out to be in administration. I wanted to keep doing research."

Over the years, Sharpley had built relationships through professional organizations with soil and water scientists at other institutions. Among those was Tommy Daniel, a soil scientist with the U of A System Division of Agriculture with whom Sharpley shared an interest in investigating how fertilizer nutrients move through soils. Those relationships opened other doors for Sharpley, and one of those doors brought him to Arkansas in 2006.

At home in Arkansas

"The Division of Agriculture gave me the freedom and flexibility to follow new research avenues," he said. "They gave me enough rope to succeed or to hang myself."

Not only did Sharpley get to continue his passion for research, but he was able to work on more applied research projects. His arrival coincided with concerns about nutrients from poultry litter in the Illinois River watershed, and the Division of Agriculture was called upon to investigate the process and develop best management practices for mitigating risks to the river.

Several years later, concerns over the potential impact of a swine farm on Big Creek in Newton County opened a new research project. Responding to public demand, the state of Arkansas required monitoring of nutrient impacts on the creek. The job fell to the Division of Agriculture, and Sharpley, working with almost a dozen research and extension faculty and local U.S. Geological Survey personnel, took on the job.

The farm's owner eagerly cooperated with the study, and the monitoring gave Sharpley an opportunity to investigate how water— the medium that transports nutrients through soils — moves through karst landscape. Karst topography is composed of limestone or other soluble rocks characterized by underground drainage systems with sinkholes and caves. Sharpley and his collaborators employed novel techniques to map the underground terrain in order to predict how water might move through it.

Sharpley's applied research in Arkansas gave him the opportunity to work closely with farmers throughout the state. "There was a growing need for farmers to become more proactive regarding nutrient loss," Sharpley said. "And many are willing and eager to do so."

He and Cooperative Extension specialist Mike Daniels, working with collaborating farmers, other agricultural stakeholders and federal and state agencies, developed the Arkansas Discovery Farms Program in 2009. Its goal is to determine the effectiveness of soil and water conservation practices on working farms. Today there are 14 privately owned farms across Arkansas participating in the program.

The participating farms also serve as demonstration sites where other farmers, researchers from other institutions, regulatory agencies and government policymakers can come and see for themselves how agricultural conservation practices can be effective and affordable. It also empowered Discovery farmers to be engaged in promoting on-farm conservation measures.

"It has been very rewarding to work with Arkansas farmers on their farms," Sharpley said. "And also, to work on something important to them and the state, where you can see the direct benefits of our collective efforts."

Sharpley said coming to Arkansas turned out well for him. "It's been a good move for me, personally and professionally," he said. "The Division of Agriculture under Mark Cochran (vice president-agriculture for the U of A System) and the administration have been supportive and had my back. I've always had the feeling that the division was an extended family where people work together."

"I've made a lot of good friends, and even got married here,"

Sharpley's wife, Sarah, is a native of Jonesboro, Arkansas, and retired a few years ago after teaching 28 years in northwest Arkansas.

When he hasn't been jumping back in to see about those unfinished projects, Sharpley has been enjoying retirement at their home on Beaver Lake near Rogers. "I'm enjoying taking care of the things to do out here, like the garden and such.

"It's been a wonderful career experience to work with so many good people," he said. "And to impart knowledge and to learn something new in return."