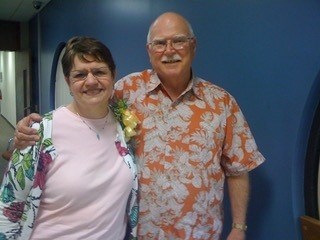 Charles and Susan Riggs at his retirement party in 2011.

Professor emeritus Charles Elmer "C.E." Riggs Jr., 75, a beloved faculty member in the University of Arkansas' Department of Health, Human Performance and Recreation for 27 years, passed away in February following a lengthy illness.

Riggs was hired as the director of the Human Performance Lab (now the Exercise Science Research Center) in 1984, just after construction of the new Health, Physical Education and Recreation Building was complete.

Riggs' research focused on medical and biological models and was published widely. He collaborated with faculty members in departments across the U of A campus and at other universities. He was instrumental in getting a kinesiology Ph.D. option in the department. Riggs retired in 2011 as a professor emeritus in the College of Education and Health Professions.

Professor emeritus Sharon Hunt, department head during most of Riggs' tenure, said he received a variety of awards for excellence in teaching and advising, research and service "which is the tripartite mission of a land grant university."

Hunt and other colleagues noted that Riggs always had a twinkle in his eye and could be mischievous, but he was well respected and loved by students, faculty and staff.

"In the classroom and the laboratory, he was a demanding teacher and mentor who held his students to a high standard of performance," Hunt said. "The students knew that Dr. Riggs truly cared about them and was committed to preparing them for success in their careers as well as in their life journeys."

Susan Mayes, an instructor emerita who worked with Riggs for 27 years, also noted that he enjoyed seeing students excel. "He gave students time," she said. "For several years his office was next door to mine, and I observed him spending quality time on advising and mentoring students to plan for the future."

Inza Fort, a professor emeritus who was among the four original members of the exercise science faculty along with Riggs, said he always did more than his share of committee work, too.

"Charles was an advocate for faculty. The university faculty elected him to serve as Campus Faculty chair and Faculty Senate chair," she said. "He served with distinction. My life is richer for having him as a colleague and a friend and I will miss him."

Ro DiBrezzo, also among the original four exercise science faculty members, said of Riggs: "As so many have already mentioned, he loved mentoring our students, particularly our undergraduates. He and I would have many discussions about scholarship, some rather lofty and philosophical. He made me a better researcher, better lab director, and a better faculty member. I will miss him."

DiBrezzo, who retired in 2020, said she loved seeing Riggs walk down the hall of the lab carrying his ever-present cup of coffee, smiling and talking "all things Texas football."

Riggs was born Jan. 20, 1946, in Orange, Texas. After graduating from Stark High School in Orange in 1964, he was recruited to play for the Texas Longhorns football team and remained an ardent fan.

He met his future wife while a student at UT and they married in 1968. (His wife, Susan Riggs, is an instructor emerita at the U of A.)

In 1969, Riggs graduated with a bachelor's degree in Physical Education and began teaching and coaching at Stark High. After deciding that coaching wasn't his calling, he entered the Texas A&M Physical Education graduate program and received his M.S. and Ph.D., earning awards for excellence.

Following a year of post-doctoral work at the University of California-Santa Barbara, the family moved to Tallahassee, where he began his collegiate career as an assistant professor at Florida State University.

After six years, with tenure and promotion accomplished, Riggs accepted the U of A position.

Family members said his most cherished career endeavor was a sabbatical at the Mayo Foundation in Rochester, Minnesota, in 1998, as a visiting scientist. While there, he learned to clone his own tissue to research fatty acid oxidation disorders, so that others would not have to undergo procedures to harvest it. His own research began to revolve around this topic in collaboration with other U of A faculty and undergraduate and graduate students.

Colleagues said Riggs' professional achievements will long be remembered, but loyalty to family and friends was his most impressive characteristic.

"He so loved his wife, Susan, and his children, Stephanie and Brendon," Mayes said. "His grands, Chloe and Chris, made him proud as a peach. Personally, his loyalty was his warmest asset."

Hunt added, "His unwavering devotion to his wife, children and grandchildren will be his legacy, denoting a life well lived."

A celebration of Riggs' life will be held after COVID-19 restrictions are lifted.