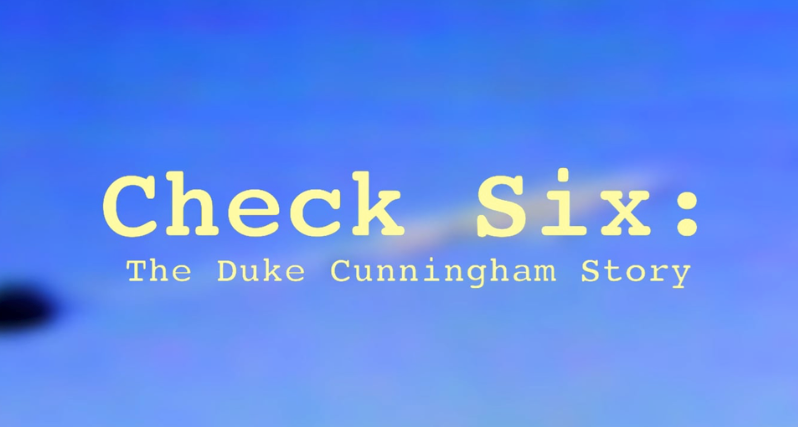 The short documentary of a war hero, a former U.S. Congressman, and educator whose career came to a halt when he was sentenced to prison for taking bribes. Directed by Ninette Sosa.

FAYETTEVILLE, Ark. – Ninette Sosa, an alumna of the School of Journalism and Strategic Media at the University of Arkansas, directed the first look at Randall "Duke" Cunningham's life after prison in the documentary film "Check Six: The Duke Cunningham Story".

Cunningham, a decorated Naval fighter pilot and former California congressman, was sentenced in 2006 to more than eight years in prison for federal tax evasion and bribery charges.

Following his release from prison in 2013, Sosa, a graduate student at the time, traveled to Cunningham's home in Hot Springs Village to conduct the first on-camera interview with him since his prison sentence. In the short documentary Cunningham shares the lasting impacts of the criminal charges on his career and personal life, despite his prison time being served.

"Getting Mr. Cunningham to agree to participate in the documentary was a challenge because he did not want the attention. After a few months of 'begging', he eventually agreed," Sosa said.

On Jan. 20, 2021, Cunningham was granted a conditional pardon by President Trump.

President Trump granted a conditional pardon to Randall "Duke" Cunningham who was released from prison in 2013. Former Speaker of the House Newt Gingrich strongly supports this pardon. Mr. Cunningham, a former California Congressman, was sentenced to over 8 years' imprisonment for accepting bribes while he held public office. During his time in prison, Mr. Cunningham tutored other inmates to help them achieve their GED. Mr. Cunningham is a combat veteran, an ace fighter pilot, and a member of the Military Order of Purple Hearts. Although combat-disabled, he continues to serve his community by volunteering with a local fire department and is active in Bible Study.

Sosa reconnected with Cunningham after the announcement of his pardon. Cunningham told Sosa he appreciates the second chance in life.

"Check Six: The Duke Cunningham Story" was produced in 2018 as Sosa's master thesis under the supervision of journalism professors Larry Foley, Rob Wells and Dale Carpenter. The film has been nationally and internationally recognized at film festivals.

The film can be viewed online or during UATV special airings.

About Ninette Sosa @NinetteSosa: Ninette Sosa is a digital media reporter at KNWA/FOX 24 in Northwest Arkansas and Region 5 director for the National Association of Hispanic Journalists. Sosa received a Master of Arts in Journalism, with a documentary film focus, from the University of Arkansas in 2018. The Guatemalan native is an award-winning news journalist and worked as a certified war correspondent for CNN in 2006.