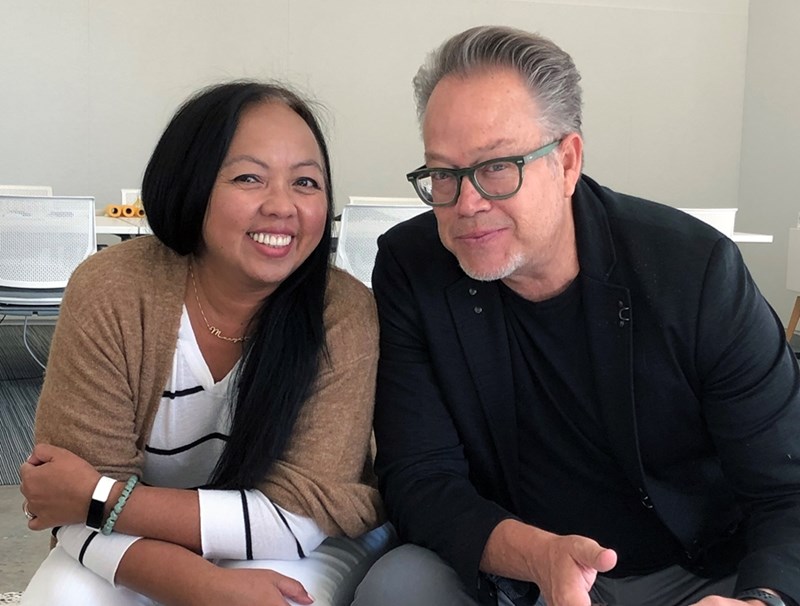 The couple’s commitment also includes an annual gift, so scholarship awards can be made available starting with the 2021-22 academic year.

“I haven’t traditionally seen many students from the Delta studying architecture, so Ati and I asked ourselves how we could be more proactive in developing opportunities for diverse students to come to the U of A,” Marlon Blackwell said. “This scholarship is about providing opportunity and possibility. Education helps break the cycle of economic inequities and expands economic opportunity, and we’re hopeful that this scholarship provides an incentive for more students from the Delta to study the disciplines of architecture.”

The Blackwells noted that social justice issues in the United States helped fuel their determination to give back and make a difference.

“I realized I can listen, but I can also act,” Blackwell said.

Ati Blackwell added, “We felt like we needed to help students from the Delta, and we felt an urgency to do something sooner rather than later.”

“The Fay Jones School seeks to extend the legacy of its namesake by being a leader in architecture and design excellence and education,” said Peter MacKeith, dean of the school. “In the contemporary moment, as leaders in architecture and design for the nation, state and the community, Marlon and Ati have recognized that design leadership must also extend to leadership in public service and leadership on issues of societal importance. This wisdom and commitment animates their generous gift to the school – a gift, truly, to our students now and in the future. The Blackwell scholarships exemplify our commitment to act in the cause of diversity and inclusion through design education, and our commitment, through design, to the greater good of all the citizens of the state. On behalf of the school, I am deeply grateful to Marlon and Ati Blackwell.”

The Blackwells attribute their passion for education to their upbringings and family influences. Marlon Blackwell said his grandmother, a noted educator from Alabama, Dr. Maree Blackwell, gave him his first taste of the importance of education, and Ati Blackwell said her parents, who were both teachers in Malaysia, also felt strongly about education. Both came from modest backgrounds and believe education helped them achieve the success they have found in their careers.

“From the beginning, Marlon’s dad told him he would go to college,” Ati Blackwell said. “Education changed my life also and was always emphasized by my parents. Marlon and I are where we are today because of our education, and we want to make sure others have that opportunity as well.”

The Marlon and Ati Blackwell Advance Arkansas Endowed Scholarship will support new, returning and transfer students from Arkansas who exhibit financial need, records of academic success and a strong desire to complete their degree at the University of Arkansas in the Fay Jones School. Preference will be given to students who are graduates of a high school located in the Arkansas Delta, including the counties of Chicot, Clay, Craighead, Crittendon, Cross, Desha, Greene, Jackson, Jefferson, Lawrence, Lee, Lincoln, Lonoke, Mississippi, Monroe, Phillips, Poinsett, Pulaski, Prairie, Randolph, White and Woodruff. Students majoring in architecture, landscape architecture, and interior design and enrolled full time in either one of the professional programs or four-year architectural or landscape architectural studies program are eligible.

In addition to his designation as Distinguished Professor, Marlon Blackwell is also the holder of the E. Fay Jones Chair in Architecture. He has taught in the Fay Jones School since 1992 and was named the 2020 Southeastern Conference Professor of the Year and received the 2020 SEC Faculty Achievement Award for the University of Arkansas.

A Fellow of the American Institute of Architects, Blackwell also received the 2020 AIA Gold Medal – the institute’s highest honor – recognizing architects with enduring impacts on theory and practice. He was named a 2014 United States Artists Ford Fellow and selected for the 2012 Architecture Prize from the American Academy of Arts and Letters.

He is founder and co-principal at Marlon Blackwell Architects, an architecture and design firm based in Fayetteville, and he earned a Bachelor of Architecture from Auburn University and a Master of Architecture II from Syracuse University in Florence, Italy. The firm received the 2016 Cooper Hewitt National Design Award in Architecture.

Caree A. Banton, associate professor of history, will give a talk on "Elections and Identity Politics: Interrogating Group Belonging in Black and White Republics" at 6 p.m., April 21, via Zoom.

Ava Wait, a graduate student in plant pathology, will give a seminar titled "Characterization, Incidence and Epidemiology of Two Novel Strawberry Rhabdoviruses" at 3:30 p.m. via Zoom.