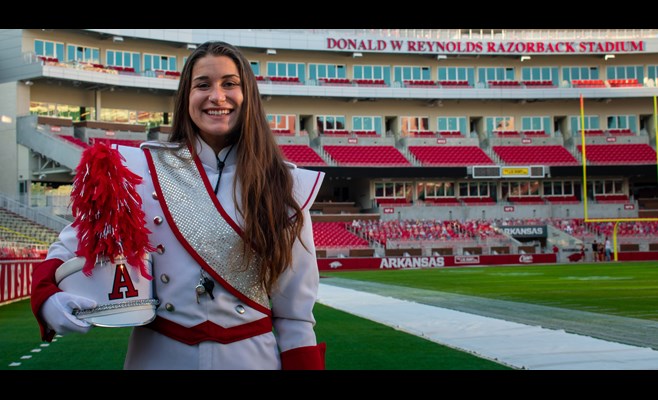 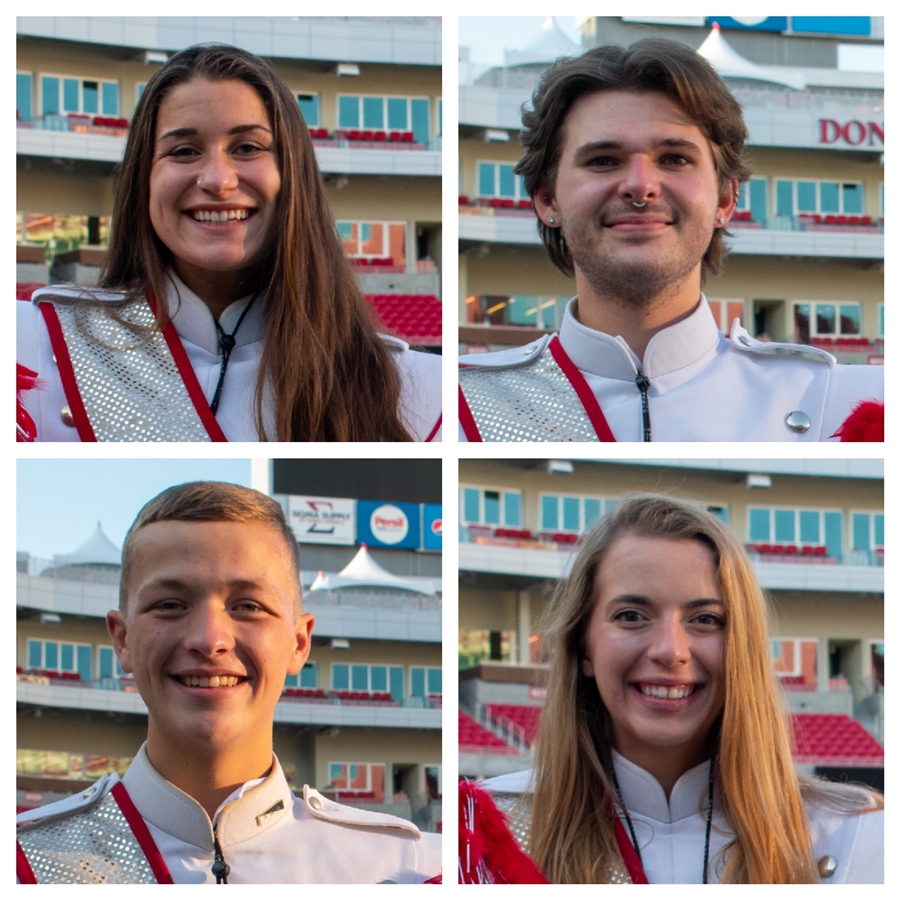 FAYETTEVILLE, Ark. – Four drum majors were selected to lead the Razorback Marching Band through the 2020-21 season, and the quartet have already tackled Early Week, regular rehearsals, and the first football game of the season.

This year's drum majors include Tyler Osterman from Webb City, Missouri; Katelyn Barry from Willis, Texas; Samantha Ellis from Canton, Texas; and Logan Morris of Little Rock. All were selected after a competitive audition process in the spring.

Barry, Ellis and Morris are first-year drum majors. Osterman is returning for his second year and will serve as head drum major.

Members of the Razorback Marching Band who have completed at least one year are invited to try out for a spot as drum major. After an initial written submission, applicants are interviewed by the University of Arkansas Bands faculty, fielding questions on their qualifications and leadership abilities.

From there, select applicants offered examples of their conducting, showcased their version of the famous drum major strut, and demonstrated how they would teach marching fundamentals.

"Our student leaders are the lifeblood of the program," said Benjamin Lorenzo, director of the Razorback Marching Band. "They help teach, inspire and lead. We are looking forward to Tyler, Katelyn, Samantha, and Logan adding to the long legacy of talented and dedicated Razorback drum majors."

Each year drum majors are also awarded the Preston and Kathryn Woodruff Drum Major Scholarship. These awards were created by Tyler Thompson, a Fulbright College of Arts and Sciences alumnus and former drum major, to honor the Woodruffs for their long and faithful service to the members of the Razorback Band.

Tyler Osterman, a junior music education major and French horn player, is returning for his second year as drum major and will serve as head drum major this fall.

"I am so thankful for the privilege to serve the Razorback Marching Band again this year in the role of drum major," Osterman said. "I am equally thankful to be joined by an extraordinarily talented team of drum majors and student leaders that have excelled in a season of adversity."

Katelyn Barry plays oboe and is a double major in music education and journalism.

"The power of over 300 people to make a mark in music and spirit far outmatches the power of one, and I'm always excited and proud to be a member of such an inspiring group!" Barry said. "This year, more than ever, I'm grateful for the art, positivity and energy we'll be able to share with each other and the community."

Junior Logan Morris is a music education major who plays the French horn.

"Being able to serve the RMB as a drum major has been an incredible experience so far!" Morris said. "As a drum major team, we've had to navigate leading a marching band in an environment marching bands have never operated in previously. Thanks to the variety of skill sets our leadership team possesses, we've been able to have a really successful season so far, and I can't wait to see what the rest of the season holds!"

Samantha Ellis is a senior clarinet player who is also majoring in music education.

"This ensemble has easily been one of the most valuable experiences of my collegiate career," Ellis said. "This year more than ever, I am thrilled for the opportunity to continue to make music with my peers in this new normal. Go Hogs and Woo Pig Sooie!"

About the University of Arkansas Bands: The University of Arkansas Bands Program, inside the Department of Music in the Fulbright College of Arts and Sciences, began in 1874 and is one of the oldest band programs in the country. The program has six ensembles including the Razorback Marching Band, Hogwild Band, and four concert bands with over 400 student members representing every college at the university.