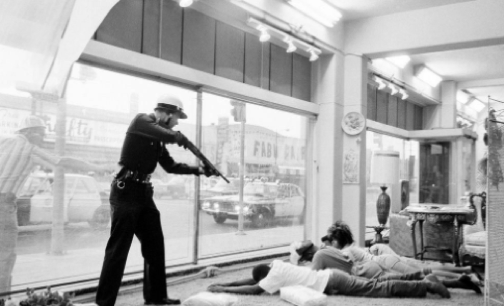 The David and Barbara Pryor Center for Arkansas Oral and Visual History opens its fall 2020 lecture series next Thursday with "Feeling Riots: The Emotional Language of Urban Rebellion," presented by Lisa M. Corrigan, professor of communication in the Fulbright College of Arts and Sciences.

This will be the first of four lectures focusing on racism, social justice, and policing hosted by the Pryor Center. Corrigan's lecture will be held virtually via Zoom at 6 p.m. Thursday, Sept. 24. Please register in advance for this event.

Corrigan will reflect upon the multiple interpretations of major urban rebellions in the United States between 1964-1969 to understand how descriptions of the major race riots, especially the metaphor of the powder keg, created and reflected racialized political feelings where hopelessness replaced hope as the emotional framework for racial liberalism and as the possibly of integration ebbed.

Corrigan is director of the Gender Studies Program and is affiliated with the Latin American and Latino Studies Program. She is a feminist critical race scholar who researches and teaches in the areas of intimacy studies, social movement studies, the Black Power and civil rights movements, prison studies, feminist studies, and the history of the Cold War.

Corrigan's first book, Prison Power: How Prison Influenced the Movement for Black Liberation, is the recipient of the Diamond Anniversary Book Award and the 2017 African American Communication and Culture Division Outstanding Book Award, both from the National Communication Association.Her second book is titled Black Feelings: Race and Affect in the Long Sixties.