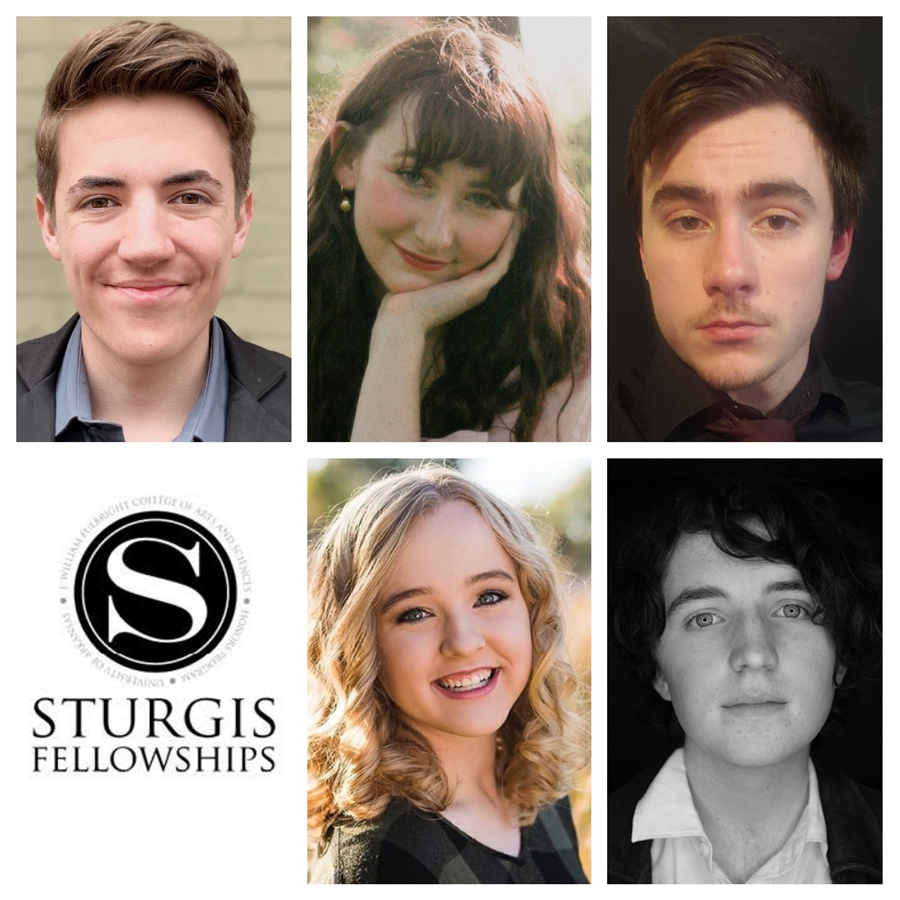 FAYETTEVILLE, Ark. – Five incoming freshmen, all Arkansans, have joined the distinguished list of Sturgis Fellows in the Fulbright College of Arts and Sciences this fall.

“We are thrilled to have these phenomenally talented scholars join our Fulbright College family,” said Todd Shields, dean of Fulbright College. “Each has already achieved so much, and each embodies exactly what we look for when awarding one of the U of A’s most impressive fellowships. We cannot wait to see what each will pursue and accomplish next.”

The Sturgis Fellowship is the University of Arkansas' oldest and one of its most prestigious fellowship programs.

It awards each fellow $72,000 over four years, covering tuition, room and board, and provides support for educational tools such as computer hardware and software, high-quality musical instruments, professional journals and participation at academic conferences.

Sturgis Fellows must pursue a major within Fulbright College, complete an intensive academic program, and graduate with honors. They are also encouraged to study abroad. The fellowships are made possible by the continued support of the Roy and Christine Sturgis Charitable and Educational Trust.

“Thanks to the Sturgis’ support and this incredible living legacy they’ve created, over the past three decades dozens of outstanding student-scholars have joined our college and excelled as Sturgis Fellows,” said Kirstin Erickson, director of the Fulbright College Honors Program. “While 2020 has been an unusual year so far, we know without a doubt that this year’s fellows will do amazing things and truly thrive while they are here at the U of A and long after completing their studies.”

Sebastian Boysen, a graduate of Little Rock Central High School as a Cum Laude Society member, was involved in multiple national honor societies and clubs, including the Astronomy Club, which he served as founder and president. He is an American Chemical Society Scholar, National Hispanic Merit Scholar, and National A.P. Scholar. He also worked at the Center for Integrative Nanotechnology Sciences at UALR, conducting biomedical research. He was also an active community volunteer through the Centers for Youth & Families. He plans to major in biochemistry with an interest in pre-med and is also exploring an additional degree in music composition. His parents are Gunnar Boysen and Maria Lopez-Boysen.

Sarah Long, a graduate of Southside High School in Fort Smith, was an A.P. Scholar who was involved in National Honor Society, French club, Genders and Sexuality Alliance, Future Business Leaders of America, and the media department. She volunteered at local elementary schools to teach French and also worked as Southside’s newspaper co-editor, where she earned state writing awards. Additionally, she was a member of the school’s theatre department where she worked as costume designer, sound designer, head of publicity, and co-director throughout her senior year while also appearing in the department’s shows. She plans to double major in journalism and French. Her parents are Vicki and Robert Long.

Brenton Perry, a graduate of West Fork High School with high honors, also concurrently earned his Associate of Arts degree summa cum laude from NorthWest Arkansas Community College. He was involved as a member of Upward Bound, West Fork Student Technology Aides, and as a teacher’s aide during his senior year. He also served as the vice president of the West Fork Gay-Straight Alliance and as the founder and president of the West Fork Fantasy Gaming Club. He plans to double major in biology and biochemistry with a minor in philosophy and aspires to become a professor of cell and molecular biology. His parents are Roger and Amanda Perry.

Benjamin Pierce, a graduate of Fayetteville High School, was a National A.P. Scholar, National Merit Finalist, a member of the math and science honor societies and served as an officer for his school’s National Honor Society and French Honor Society. He was also on the Fayetteville High School quiz bowl, history bowl, and debate teams. After school, he volunteered with the campaigns of local political candidates and at the University of Arkansas Jane B. Gearhart Full Circle Food Pantry. He plans to major in history and political science with an emphasis on the history of science and hopes to attend law school. His parents are Michael Pierce and Tricia Starks.

Josie Zakrzewski, a graduate of North Little Rock High School, was valedictorian, a National A.P. Scholar, a 2020 Arkansas Times Academic All Star, member of Mu Alpha Theta, National Honors Society and president of the Beta Club. She was heavily involved in theatre; designing sets and starring in her school’s production of Guys and Dolls. She was also a forensics team member, directing two first-place-winning group events and winning solo and duet awards, and volunteered on the North Little Rock Mayor’s Youth Council. She plans to major in biochemistry and anthropology, with a minor in Spanish and plans to attend medical school. Her parents are J.T. and Ángela Zakrzewski.

About the Fellowship: The Sturgis Fellowship in the Fulbright College of Arts and Sciences was established at the University of Arkansas in 1985 through the generous philanthropy of the Dallas-based Roy and Christine Sturgis Charitable and Educational Trust with an endowment of $2 million. The program’s success led to additional gifts in 1992 and 1998, bringing the total program endowment to $10 million. With only 16-20 Sturgis Fellows on campus at any given time, each receives the kind of individual attention from the director, associate director and staff of the Fulbright College Honors Program that delivers a memorable and productive college experience.