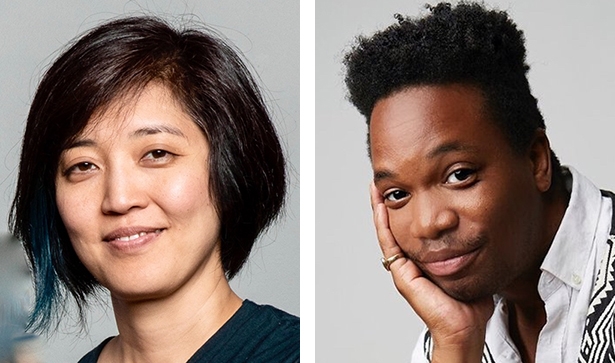 FAYETTEVILLE, Ark. – The Department of Theatre in the University of Arkansas' Fulbright College of Arts and Sciences has named playwrights Mia Chung and Keelay Gipson as co-winners of the 2020 Kernodle New Play Award.

The reading committee — composed of graduate students and faculty members — read nearly 200 new plays from playwrights across the country before settling on Chung's play This Exquisite Corpse and Gipson's The Lost, Or How to Just B.

The contest, named in honor of University of Arkansas faculty member George Kernodle, garnered a diverse and abundant number of submissions on all manner of subjects and styles, demonstrating the richness of the dramatic form and the variety of the conversations playwrights are wanting to have with audiences.

"In this moment, we all could use something to celebrate and these two plays and writers give us much to celebrate, while they simultaneously boldly challenge," said John Walch, assistant professor of playwriting and director of the Kernodle Award.

"In both plays, the urgency of voice — the need to have this conversation and give voice to this perspective — was off the charts and artistic 'risk and investment' are two of the most important criteria we look at as a reading committee," Walch said.

The prize comes with a cash award, the possibility of further development of the script, as well as potential guest artist mentorships to further work with the graduate students in the Department of Theatre.

This Exquisite Corpse, by Mia Chung, is about the special relationship between South Korea and the West (particularly the United States) during and after the Korean War. It looks at this relationship through the lens of prostitution — an ongoing legacy of the war. Ultimately, the historical information is secondary to the story of trauma and its impact on expression.

The play summons Soojin, a wartime prostitute, who tells her own story in a particular way — which happens to be through five fragmented and dislocated versions of herself.

One reader on the Kernodle committee noted, "The writing is beautiful and wove a really powerful story with a really poetic approach."

The Lost, Or How to Just B, by Keelay Gipson, tells the story of a Black boy navigating his way through the foster care system while trying to find his wings — and love — when the world tells him he has none.

Told through hip hop and spoken word, B discovers himself through the city that raised him and the city he has never known.

Readers on the committee were drawn to the central character, known just as B, with one noting, "the voice of B is present and lingers," and another commenting, "beautiful play focusing around a young man finding his identity in the LGBTQ community and the foster care system. The playwright masterfully intertwined both themes and made this a moving piece."

Gipson dedicates this award in memory of his mother, Gwendolyn Gipson.

Mia Chung is a playwright whose plays include Catch as Catch Can, which has been re-scheduled to premiere in Steppenwolf's 2021-22 season after Page 73 produced the world premiere (New York City, fall 2018). Her play You for Me for You premiered at The Royal Court (London), the National Theatre Company of Korea (Seoul), and Woolly Mammoth Theatre (Washington, D.C.); and is published by Bloomsbury Methuen. Chung's awards, commissions, fellowships, and residencies include Clubbed Thumb, EST/Sloan, Frederick Loewe Award in Music-Theatre, Huntington Theatre, Ma-Yi Writers Lab, MTC/Sloan, National Endowment for the Arts, New York Theatre Workshop, Playwrights' Center, Playwrights Realm, South Coast Rep, SPACE at Ryder Farm, Stavis Award, TCG, and New Dramatists. She also received a 2019 Helen Merrill Playwriting Award.

Keelay Gipson is an activist, professor, and playwright whose plays include The Red and the Black (The Lark Studio Retreat), imagine sisyphus happy (Finalist; Eugene O'Neill National Playwrights Conference, P73 Summer Residency); #NEWSLAVES (Ignition Festival; Finalist; Princess Grace Award, The O'Neill); CRH, or the placenta play (Semi-Finalist; The O'Neill, Bay Area Playwrights Conference); Nigger/Faggot; The Lost, Or How to Just B; What I Tell You in the Dark; and Mary/Stuart, a dramatic queering of friedrich schiller's classic play (BAM Next Wave Festival). His work has been developed at Victory Gardens, the Wild Project, HERE Arts Center, The Theater at Alvin Ailey, Tom Noonan's Paradise Factory, Pace University, The National Black Theater, Rattlestick Theater, The Fire This Time Festival, Classical Theater of Harlem, and New York Theatre Workshop. He is the recipient of New York Stage and Film's Founders' Award, the Van Lier Fellowship at New Dramatists, and fellowships with Lambda Literary, The Amoralists, Page 73, Dramatist Guild Foundation and Playwrights' Realm. Gipson and playwright Stacey Rose are currently working on the Requirements for BIPOC Artists survey to hold theatres accountable.

About the Department of Theatre: The University of Arkansas Department of Theatre has been providing exciting and affordable theatre for more than 60 years. The department combines a first-rate theatrical education full of hands-on experience with a wide selection of titles to challenge students and the community. The department offers the Bachelor of Arts degree in Theatre, a broad spectrum program in the context of a liberal arts education, and the Master of Fine Arts degree in six concentrations: Acting, Directing, Playwriting, Costume Design, Scene Design and Lighting Design. Classes at both undergraduate and graduate levels are focused on providing a strong, professional orientation to theatre performance and technology in conjunction with appropriate research-based coursework to address the required foundations in theatre history, dramatic literature and dramatic criticism.