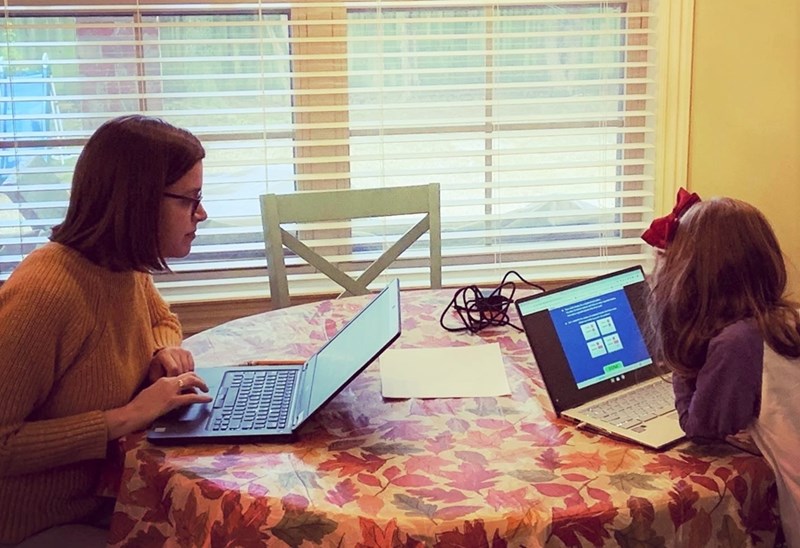 Gema Zamarro and her daughter work together at the kitchen table.

University of Arkansas professor Gema Zamarro was recently interviewed by The New York Times regarding her research about how job losses, childcare duties and mental distress have disproportionately affected women during the coronavirus pandemic.

The Times story focuses on a San Diego mother who filed a lawsuit against her employer. The woman claims she lost her job because a supervisor complained her children were too loud during online meetings.

While Zamarro did not weigh in on the lawsuit, her research brief on "Gender Differences in the Impact of COVID-19" was cited. Zamarro, who teaches in the Department of Education Reform in the U of A College of Education and Health Professions, determined that mothers have borne the brunt of child care since the pandemic began.

Zamarro is also an adjunct senior economist for the University of Southern California's Center for Economic and Social Research, which has been collecting data through the Understanding Coronavirus in American Study. The study informed Zamarro's brief, which she co-authored with USC colleagues Francisco Perez-Arce and Maria Prados.

Zamarro, a mother with young children ages 7 and 9, initiated the study after noticing anecdotal evidence on social media about the gender divide related to childcare and COVID-19. She was also starting to notice the stress on a personal level.

Many working moms were struggling to stay on top of job responsibilities and to take care of their children while also homeschooling in many cases, she said. She thought the phenomenon warranted further study.

"I believe this could have important future consequences for gender equality," she said.

USC's Understanding Coronavirus in America Study found that women, particularly those without a college degree, suffered more job losses than men and handled significantly greater responsibility for childcare during the pandemic.

Zamarro said there are several reasons the current COVID-19 crisis and the coinciding recession have disproportionately affected women.

First, the pandemic has devastated service-oriented sectors that employ more women like restaurants, hotels and hospitality, leading to more job losses, she said. Secondly, as schools and daycares closed and as stay-at-home orders made it difficult for family members like grandparents to help, childcare needs soared.

"Considering women already shouldered a greater burden for childcare prior to the pandemic, it's unsurprising the demands are now even greater," Zamarro said. "While men are more likely to die from infection by COVID-19, overall the pandemic has had a disproportionately detrimental impact on the mental health of women, particularly those with kids."

Moms reported a huge spike in psychological distress in early April, compared to women without kids and to all men. The level steadily eased through early June to pre-pandemic levels, but women remain disproportionately impacted.

The analysis also found that more women than men took on childcare duties after schools closed in response to the coronavirus: 44% of women in early April reported being the only household member providing care, compared to 14% of men.

The disparity was notable among working parents, including those working from home: 1 in 3 working mothers in early April reported that they were the main caregiver, versus 1 in 10 working fathers.

Since the start of the pandemic, less-educated women have suffered the greatest job losses, the results show. They've seen a 15 percentage-point drop in employment in early April compared to March. Men without college degrees during that same period experienced an 11-point drop.

Although states, counties and cities are reopening, as of early June, just 41% of non-college educated women and 46% of men were employed.

Meanwhile, college-educated men and women are experiencing job losses at similar rates. Employment for both dropped from about 74% to 67%.

Zamarro said the Center for Economic Research will continue to collect data for the Understanding Coronavirus in America Study.

"I plan to continue with this research and to follow these respondents in the coming months as schools may or may not be able to open and remain open in the fall," she said. "The fact that we observe college-educated moms reducing working hours is worrisome as it might imply that if the situation continues some moms might decide to leave the labor force to provide the necessary care."

A total of 6,824 members of the probability-based Understanding Coronavirus in America study participated in six tracking survey waves from March 10 through June 16, 2020.

Sample sizes and margins of sampling error for the populations in this release are available in the full study report.

Zamarro holds the 21st Century Endowed Chair in Teacher Quality at the U of A.