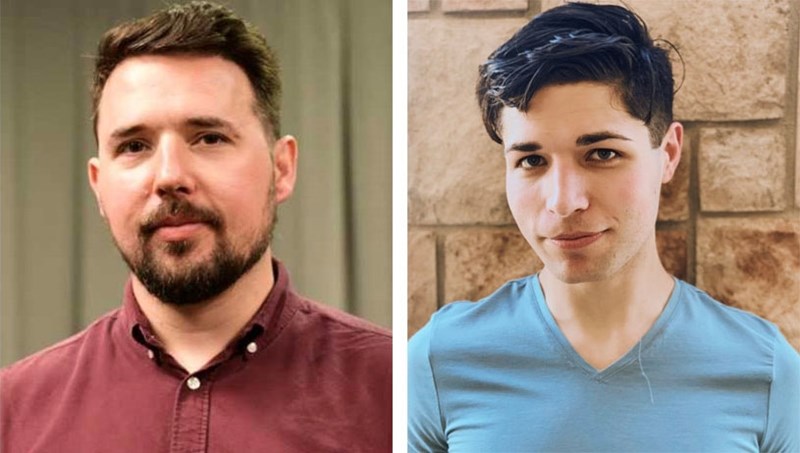 The Department of Communication in the Fulbright College of Arts and Sciences welcomes two assistant professors to its faculty this fall.

Joe Hatfield holds a Ph.D. in communication, as well as graduate certificates in digital humanities and critical theory, from the University of Colorado Boulder. Hatfield also earned a M.A. in communication and rhetorical studies and a certificate of advanced studies in women's and gender studies from Syracuse University after completing a B.A. in English from the University of North Texas. Hatfield's research and teaching center on the rhetoric of gender and sexuality, with a focus on how these markers of identity are culturally and technologically mediated.

Broadly, Hatfield's research agenda focuses on the rhetoric of gender and sexuality, with a focus on how these markers of identity are culturally and technologically mediated. Currently, Hatfield is studying the historical relationship between trans identity and social media, emphasizing the inventive ways trans people have utilized print and digital technologies to establish communication networks in the United States. Published examples of Hatfield’s past scholarship can be found in journals such as Communication, Culture, & Critique, Rhetoric Society Quarterly, Text and Performance Quarterly. Hatfield's work has won numerous accolades, including the distinction of Top Paper from multiple divisions at the annual meeting of the National Communication Association. Most recently, Hatfield was the awardee of the 2020 Charles Kneupper Award, an honor distinguishing the most significant contribution to the study of rhetoric published in the 2019 volume of Rhetoric Society Quarterly, for the article “The Queer Kairotic: Digital Transgender Suicide Memories and Ecological Rhetorical Agency.”

“We are delighted to have Drs. Hatfield and Jones join our faculty,” said Stephanie Schulte, department chair. “The Communication Department has made building our national and international research profile and developing our top-notch research center, the Center for Communication Research, our top priorities. Dr. Hatfield’s transformative work on the rhetoric of sexuality, on online expressions of transgender youth suicide, builds on our strengths in public communication and civic engagement. Dr. Jones’s innovative work on virtual reality and interactive video builds on our growing area of creative communication arts. Additionally, these two scholars help the University of Arkansas make progress toward its guiding priorities by enhancing the campus’s research and discovery mission, as well as its collaborative, innovative, diversity and inclusion priorities.