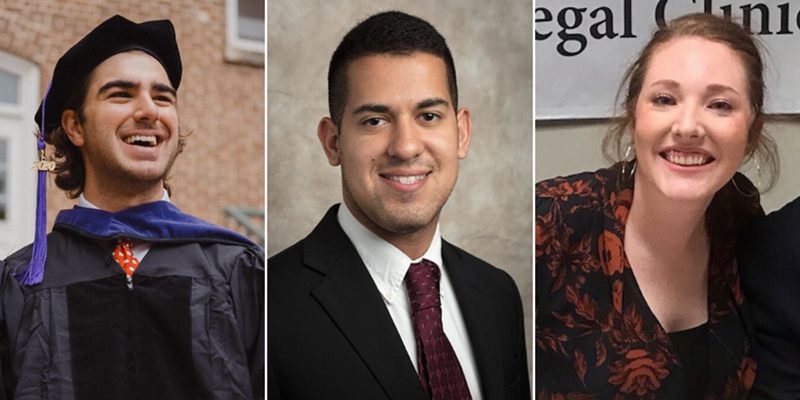 FAYETTEVILLE, Ark. – The University of Arkansas School of Law faculty and staff congratulate the class of 2020 graduate award winners. Awards include the three students with the top scores in the class along with internal and external acknowledgments of academic excellence, pro bono hours provided while in law school and service to the school and community.

"It takes hard work, sacrifice and preparation to achieve this level of excellence," said Margaret Sova McCabe, dean of the law school. "Peyton, Jorge and Taylor have consistently applied these approaches to success throughout their law school careers, and they have earned this tremendous honor."

The identities of those at the top of the class are typically held in close confidence until they are announced at the school's Commencement Exercises, held on the Saturday following the All-University Commencement. A Graduate Awards Ceremony is traditionally held on the Friday night before commencement and is followed by a reception for all graduates and their families.

"We would have preferred to honor these students during the school's traditional ceremonies, but we are no less proud of their accomplishments," McCabe said.

Graduate award winners in order listed above, from top left to bottom right.