FAYETTEVILLE, Ark. – The COVID-19 pandemic has prompted many institutions to get creative when it comes to honoring graduates. This year, the University of Arkansas School of Law added new activies to make up for the loss of old traditions.

The law school commencement ceremony, originally scheduled for 2 p.m. Saturday, May 16, was replaced with an online toast to recognize the accomplishments of the Class of 2020. As planned, at the designated time and date, the class' elected student speaker gave remarks.

"It's somewhat ironic that we've spent the past three years analyzing the most unrealistic hypotheticals fielded by both professors and our classmates, but somehow this current situation never crossed our minds," said Taylor Farr, the student chosen by his classmates to represent them in the traditional commencement program.

Some of the professors the class had elected to read names and hood candidates during the originally-planned ceremony also gave remarks, and Dean Margaret Sova McCabe emceed the event. McCabe praised the class for their positivity, ability to adapt to change and preparedness to enter the field of law.

"I know each and every one of you will contribute to the rule of law as well as to your communities in so many ways," McCabe said. "We look forward to your success."

In the week leading up to the online event, faculty members recorded messages of encouragement and congratulations to the class. The videos were posted to the school's Instagram May 8-15, and a Class of 2020 playlist featuring the send-offs is now on YouTube.

A banner honoring the graduates with their official hashtag, #UARKLaw20, was displayed at the corner of Arkansas Avenue and Dickson Street from May 8-22 for students to take photos and to publicly demonstrate the School of Law's admiration for the class.

Other recognitions are still in the works — including a social media tribute to graduates, a message from their originally-scheduled keynote speaker and more.

Congratulations to the University of Arkansas School of Law Class of 2020! 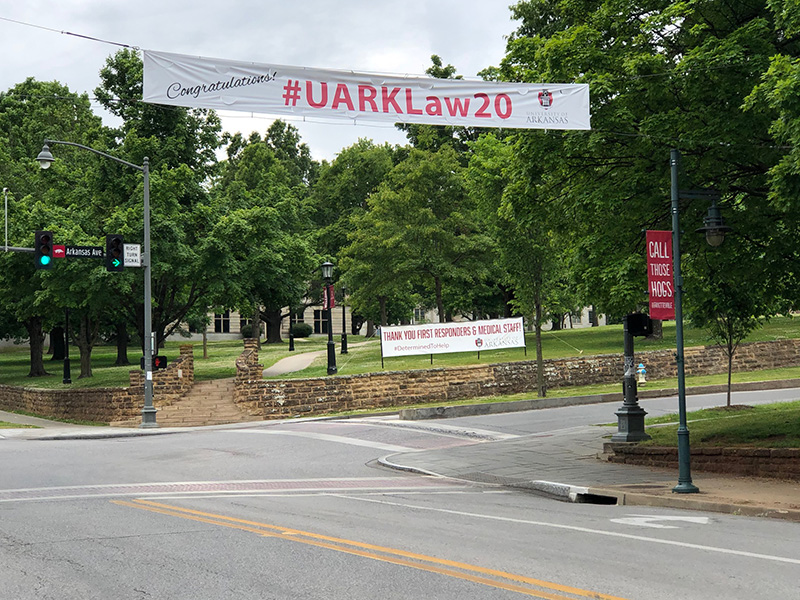