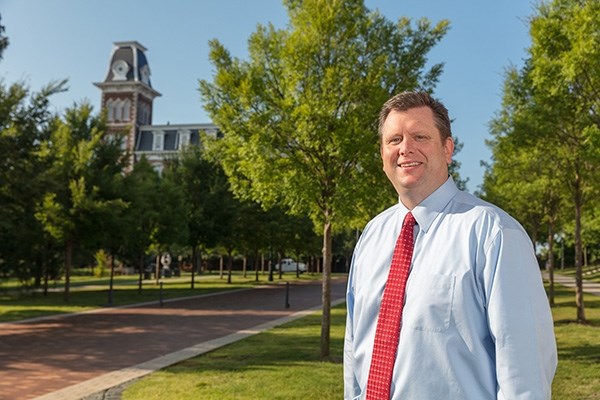 "Mark Rushing is an extraordinary leader who makes the university a better place with his strategic mindset, hard work and calm demeanor," said Mark Power, vice chancellor for advancement. "He has earned the trust and respect of colleagues across campus for his steady communications guidance and support."

Rushing has contributed to numerous key communication initiatives during his eight years on campus including developing unifying messaging themes for communicating about the U of A, updating the university's mission and vision, and creating core values. He also helped create the university's award-winning video series, Arkansas Short Takes, and was the university's first designated campus coordinator for Freedom of Information Act requests.

He currently serves as co-chair of the Sesquicentennial Planning Team, helping the university prepare for its 150th anniversary celebration in 2021. Rushing is a member of the inaugural cohort of UARK Leaders, a leadership development program designed to prepare leaders and rising leaders while enhancing campus collaboration and innovation. He is also a lifetime member of the Arkansas Alumni Association.

"The University of Arkansas is an amazing place and I'm extremely lucky to have the opportunity to go to work everyday with the goal of sharing a little bit about what makes this place so special by reinforcing who we are, what we do and why it matters," Rushing said. "Supporting the university's mission is a true team effort and I'm thankful that we have such a great team in university relations, in advancement and across campus working together to make a great university even better."

Rushing joined the university with more than 20 years worth of experience as a journalist and public relations executive. He received numerous broadcasting awards, including three regional Emmy Awards and two regional Edward R. Murrow awards while working for television stations in Fayetteville, Little Rock and Tallahassee, Florida.

Rushing also received several state and national awards for public relations efforts, earned while he served as the director of public relations for Thoma Thoma, a Little Rock-based marketing and communications firm.

As associate vice chancellor for university relations, Rushing will continue to oversee a department that is responsible for all university communications and media relations, marketing and branding of the university, supervision of website design and development, the university's design, photography and videography production, audio and video support for campus events, crisis communications, and the coordination of responses to Freedom of Information Act requests.