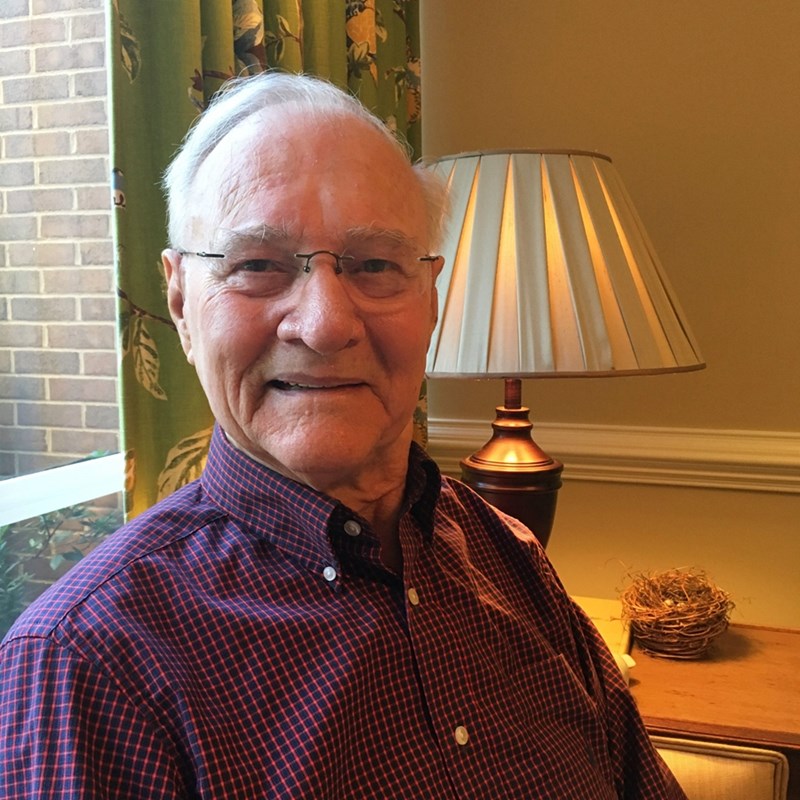 The Walter J. Lemke Freshman Endowed Journalism Scholarship in the J. William Fulbright College of Arts and Sciences and the Walter J. Lemke Journalism Collections Endowment in the University Libraries will be established with $50,000 gifts for each, paying tribute to Lemke’s founding of the department of journalism at the U of A and commitment to his students.

Keenan’s gifts count in Campaign Arkansas, the university’s $1.25 billion capital campaign to advance academic opportunity at the U of A.

Keenan graduated high school in Miami, Oklahoma, and came to the U of A as an Army Air Corp Reservist, selected for the Army Specialized Training Reserve Program prior to Air Corps active duty. Because of his credits earned in the ASTRP, he returned to the university as a sophomore and chose to major in journalism, where he met Lemke. Keenan described him as his hero and said he was fortunate to take several classes from the renowned Arkansas professor.

“Dr. Lemke wanted the U of A to be the place where the state’s newspaper writers were trained,” Keenan said. “He took a personal interest in what you wrote, and he’d give you good advice anytime you were given a writing assignment. His influence made for a quality education, and I felt confident I’d be able to get a good job after graduation.”

Keenan notes that World War II was going strong while he was at the university, and Lemke did his part to circulate a newsletter for those who were in service all over the world.

“He did it at his own expense and during his time away from teaching,” Keenan said.

The Walter J. Lemke Freshman Endowed Journalism Scholarship will be awarded to an incoming first-year student who is majoring in journalism in the Fulbright College’s School of Journalism and Strategic Media.

“We are so grateful to Bill Keenan for creating such a powerful and meaningful legacy through these gifts,” said Todd Shields, dean of Fulbright College. “Not only is he honoring our journalism program’s founder and one of its most iconic faculty members, but he’s also creating new opportunities for the next generation of journalists and inspiring our students through his own success as an alumnus of the program.”

The Walter J. Lemke Journalism Collections Endowment will be used to purchase, maintain or digitize materials for the University Libraries that support scholarship and research relating to the field of journalism.

“We are deeply grateful to Mr. Keenan for this impactful gift,” said Dennis Clark, dean of Libraries. “Not only will it help us provide the books, journals and databases our journalism students need, it will help us to respond with agility as emerging technologies continue to shape this field of study.”

During his time at the university, Keenan also met Cleta Sue Bennett, a student from Fayetteville High School who later became his wife.

After graduation in 1949, Keenan’s first job was at the Newport Independent, where he became editor. He then moved to the Little Rock Chamber of Commerce before starting a career writing for companies in the oil industry, like Shell Oil Company and Exxon.

At Exxon, he became an editor of Oilways, their industrial products magazine. In his role, he helped publicize the 2,200 products Exxon made for industrial customers at the time.

That experience gave him the opportunity to visit and write about a variety of companies and their products, and Keenan chose to start investing in the stock market. He then transitioned into banking by joining the Bank of the Southwest in Houston as a security analyst.

Keenan was soon recruited to First Union Bank in Charlotte (now Wells Fargo) and worked there for 12 years, until he and two associates decided to form their own company, Wedge Capital Management. By the time he retired in 1996, they were managing a portfolio of $2 billion.

Bill Keenan is a longtime annual member of Chancellor’s Society, a life member of the Arkansas Alumni Association and has been recognized in Towers of Old Main. He is also counted as a Thoroughred for his many consecutive years of giving to the university.