U of A Sophomore Named Goldwater and Amgen Scholar 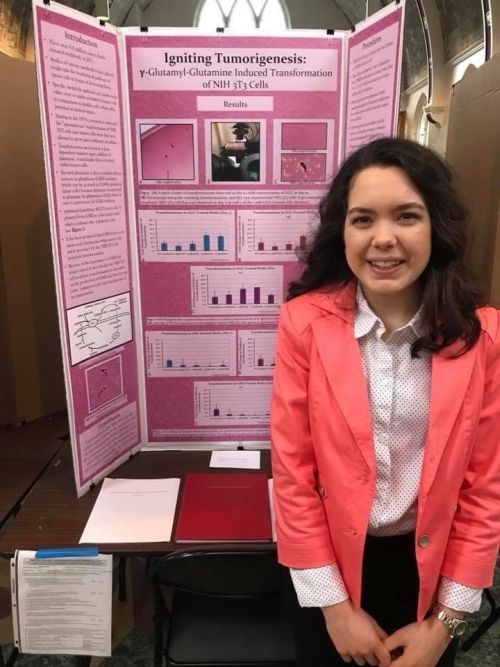 Sabrina Jones is a recipient of the prestigious Goldwater Scholar and Amgen Scholar awards.

FAYETTEVILLE, Ark. – Sabrina Jones, a sophomore at the University of Arkansas, has been named a 2020 Barry Goldwater Scholar. The Goldwater Scholarship is the nation’s most prestigious award for undergraduate students who plan doctoral studies and research careers in the fields of science, mathematics, or engineering.

Jones, an honors student from Russellville, will receive a scholarship of up to $7,500 from the Barry Goldwater Scholarship Foundation.

In addition to being selected as a Goldwater Scholar, she has also recently been selected as a 2020 Amgen Scholar. She will receive a $6,420 stipend for a 10-week summer research experience at Caltech.

“The Goldwater Scholarship is the most competitive undergraduate STEM award in the country,” said U of A Chancellor Joe Steinmetz. “The program selects students who are asking and answering important questions in their fields.  Sabrina Jones is joining an august group of Goldwater Scholars from across the country and from our campus, who have gone on to distinguished research careers. The Amgen Scholars Program is also a research-centered award, and very, very competitive. Both of these awards recognize Sabrina’s stellar academic record and her extensive and productive research, and both will help launch her post-graduate career. I look forward to soon be reading about her discoveries in neuroscience.”

Jones is an honors physics, psychology, and Spanish major in the J. William Fulbright College of Arts and Sciences. She is a Bodenhamer Fellow, Arkansas Governor’s Distinguished Scholar, National Hispanic Scholar, and National Merit Finalist. She plans to pursue a career conducting clinical neuroscience research at a medical research institution.

“I am truly honored to be recognized as a 2020 Goldwater Scholar,” Jones said. “Being a part of this class of researchers, innovators, and future scientists is an amazing recognition. I am forever grateful to the individuals who introduced me to the field of research, including my mentor at UAMS, Dr. Ryoichi Fujiwara, and my mentor at the University of Arkansas, Dr. Woodrow Shew. Though research is at times frustrating and tedious work, this pursuit has been, and will continue to be, one of the most fulfilling experiences in my life.”

The Barry M. Goldwater Scholarship was established by Congress in 1986 to honor the United States senator. Nearly 400 students from across the United States were named Goldwater Scholars this year. The purpose of the program is to provide a continuing source of highly qualified scientists, mathematicians, and engineers by awarding scholarships to college students who intend to pursue careers in these fields. Universities and colleges may nominate up to four students per year.

“Sabrina’s current research project is aimed at understanding how the activity of very large populations of neurons in cerebral cortex is related to complex body movements,” said Dr. Shew. “She is working with data recorded from more than 10,000 neurons simultaneously in mouse cortex. This data set is rather mind-blowing – five years ago it would have been impossible to obtain data like this. Her research questions require state-of-the-art data analytical skills and computer programming.

“Though she aims to become a neuroscientist, she is obtaining a degree in physics, which develops skills ideally suited to handling the heavy data analysis that is absolutely required in neuroscience. I expect her work to result in an impactful publication within a year.  She is only a sophomore and already an accomplished researcher. I can only imagine her caliber once she reaches the Ph.D. stage.”

“A big congratulations go out to Sabrina, her mentors, the Department of Physics, our college faculty, and those at UAMS,” said Todd Shields, dean of the J. William Fulbright College of Arts and Sciences. “Mentoring is such an essential part of student research and is at the core of the work we do in Fulbright College. There is no question that because of her talent, dedication and research experience with professors Shew and Fujiwara, Sabrina will thrive in a competitive M.D. or Ph.D. program. We can’t wait to see the positive impact she makes in her field of neuroscience, and how she will mentor and inspire other new scientists as well.”

Jones has published in the journals Pharmacology Research & Perspectives and Xenobiotica, as well as presented her work at conferences in Pittsburgh and Montreal. She was awarded a 2020 Honors College Research Grant, and she is also an active member of the Society of Physics Students, Conversation Club, and Honors College Ambassadors. In summer 2019, she studied Spanish at Universidad Nebrija in Spain.