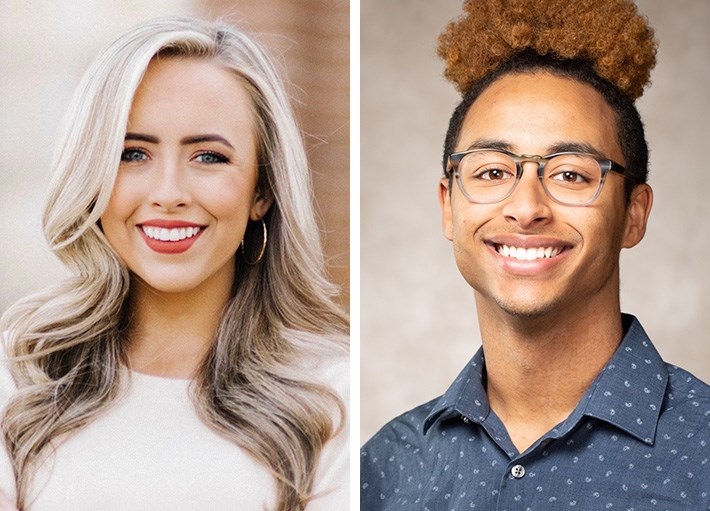 Gardner, of Fayetteville, is majoring in agricultural business and agricultural education, communication and technology, with a minor in agricultural leadership, in the Dale Bumpers College of Agricultural, Food and Life Sciences. Webster, of Marion, is a triple major in criminology, psychology and sociology in the J. William Fulbright College of Arts and Sciences. Both are honors students.

"We are very pleased to have Truman Finalists again this year," said Provost Jim Coleman. "The selection process is very competitive. I am pleased but not surprised that Katie Gardner and Daniel Webster were selected as finalists. Their academic backgrounds and their interests are very different, but they have in common that they are committed to serving others. They are clearly exceptional people who will continue to do exceptional work in the future."

Truman Scholars are selected based on a commitment to a career in public service and are awarded $30,000 in scholarship funds to attend graduate or professional school. The application process is rigorous, requiring more than 50 hours to complete. This year, 773 students from 316 colleges and universities across the nation applied for Truman Scholarships. Finalists demonstrate outstanding leadership, public service, and academic achievement.

Gardner and Webster interviewed with the Nashville review panel earlier this month though not onsite as was originally planned. All Truman finalists interviewed online this year for the first time in the Truman Foundation's history in order to mitigate the spread of COVID-19.

Gardner is a Coca-Cola Scholar, a National Agricultural Future of America Scholar, and a Borlaug Scholar. On campus, she is heavily involved in Associated Student Government, currently serving as senator and chair of the campus life committee.

Outside of campus, she has been involved in local, state and national 4-H for many years, and she was inducted into the Arkansas 4-H Hall of Fame in 2018. In addition, she has volunteered with the Veterans Health Care System of the Ozarks for over 10 years, and in 2017 she received the U.S. Veterans Affairs Voluntary Services Youth Volunteer of the Year - James H. Parke Memorial Award for her dedication to the organization. In summer 2019 she served as an intern in the White House Office of Communications and Press.

"I am incredibly honored to have been selected as a 2020 Truman Finalist," said Gardner. "The preparation for this has both challenged and motivated me to innovate new ways to connect rural and urban communities, solve problems and create the future I hope to see. It would not be possible without the support and encouragement of my honors research mentor, Dr. Jill Rucker, and all those who took the time to assist me and believe in me along the way."

"Katie Gardner leaves an invigorating impression wherever she goes," said Deacue Fields, dean of Bumpers College. "She is an exceptional student leader in the Dale Bumpers College of Agricultural Food and Life Sciences with a 'take charge' personality, and she has a passion for service that extends well beyond campus. She has had an extraordinary long-term commitment to serving veterans. That she has been inducted into the Arkansas 4-H Hall of Fame speaks volumes about her service there. This recognition is well deserved."

Webster is an Accelerated Student Achievement Program Scholar; he has also served as a mentor for the program the past two academic years. He has been an active leader in Associated Student Government since freshman year, where he is currently director of diversity and inclusion for the organization.

Through his involvement with the campus' Center for Multicultural and Diversity Education, he received the center's 2019 Bridge Builder Award and was selected as a university representative at the 2019 Southwestern Black Student Leadership Conference.

In the summer of 2019, Webster was accepted to the competitive Summer Pre-Law Program at the University of Arkansas, an intensive academic program for pre-law students from across the nation, where he was named as class speaker and received the Spirit of Service Award.

"I am so honored to have been selected as a Truman Finalist for 2020," said Webster. "I would like to thank my professors and mentors who provided constant support and reassurance throughout the application process. Through this process I have learned so much about law and public policy programs and will use my experiences to provide representation in and advocate for reform in the criminal justice system and the marginalized communities that are overly victimized by it."

"A triple major, Daniel Webster has been active in the college, in student government, in the residence hall where he is an RA, in the ASAP program and on and on — just reading his resume is exhausting," said Todd Shields, dean of Fulbright College. "His level of engagement is rare and his dedication to service runs deep. He plans a career in law to help those who are too often underserved and is a perfect fit with the ideals of the Truman Scholarship Program. I am pleased they saw what we see every day in Daniel."

University of Arkansas students who are interested in applying for the Truman Scholarship should contact the Office of Nationally Competitive Awards at awards@uark.edu.