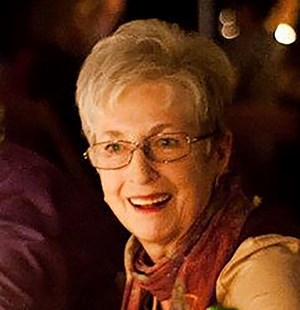 Fairly small in stature, Compton had an oversized effect on getting projects started and seeing them through to completion during her 30 years with Special Collections at the University of Arkansas Libraries. She also mentored a wide variety of students, staff and faculty members who came to Special Collections seeking historical resources and coming away with an unofficial team member and supporter.

“Ellen was one of the first people I met when I moved to Fayetteville in 2017 and began working in Special Collections,” said Lori Birrell, associate dean of Special Collections. “She unfailingly took the time to introduce me to potential collection donors and supporters of archival work whenever we spent time together. I’m forever grateful for the connections Ellen helped me forge as a newcomer to Arkansas.”

Compton attended the public schools of Bentonville, and received a Bachelor of Arts in 1960 and Master of Arts in history in 1964 from the University of Arkansas. While at the university, she was a member of Delta Delta Delta sorority where she made life-long friendships, and was president of Women's Student Association on campus.

For the next several years, Compton immersed herself in the study and teaching of history, working on her doctorate and teaching Western Civilization at the U of A. She then began her career as a process librarian with Fayetteville Public Schools.

In 1980, Compton was employed by Special Collections in the University of Arkansas Libraries, where she worked for 30 years. She received a certificate in Archives Management from the U.S. National Archives in Washington in 1982. Throughout the 1980s, she traveled the state as a field archivist, collecting materials for preservation in Special Collections. Among these was a major collection of records from women's clubs in the state with emphasis on Arkansas Home Demonstration Clubs. Her wide acquaintance with Arkansans far and wide was an invaluable asset in this work. This was also the case when she was appointed major gifts development officer during the project to expand Mullins Library.

In 2002, she began work on the extensive professional and personal papers of Fay Jones, a prize-winning architect and faculty member of the university's School of Architecture. She conceived of and established the the collecting focus on Arkansas architecture archives. Compton's career at the university culminated in 2009 with the Distinguished Service Award, recognizing her 30 years of outstanding contributions to the U of A.

Compton and her family hosted international students attending the U of A, developing close, lasting friendships with many of them.

She was active in the Ozark Society, which was founded by her father, Neil Compton, one of the leaders in preserving the Buffalo River as America’s first national river. She was twice appointed by then Governor Bill Clinton to the Arkansas Natural Heritage Commission, serving from 1979-1996. Like her parents, she felt close to nature, enjoyed hiking, and was passionate about saving and maintaining the Buffalo River for future generations.

She was a member of the Washington County Historical Society and was editor of the WCHS journal Flashback from 1979-81. She served as president of the Arkansas Historical Association from 1986-1988.

Wanting to preserve the legacy of their grandmother and their parents, Ellen and her siblings sold their family home and grounds in Bentonville where it is now known as Compton Gardens and part of the Peel Compton Foundation.

Compton and Charles Alison published Fayetteville: Images of America, a book of photos and descriptions detailing the history of the town, beginning with its founding in 1828.

In 2017, she received the Washington County Historical Society's Distinguished Citizen Award. In 2018, she was the recipient of the Arkansas Historical Association's Lifetime Achievement Award.

Ellen was preceded in death by her grandmother, Edna Swift Putman, her parents, and her brother, William David Compton. She is survived by two sons, David Shipley of Little Rock and Neil Shipley of Fayetteville; her sister, Edra Ann Diaz of Prairie Village, Kansas; four grandchildren; and two nephews.

Cremation arrangements are under the direction of Moore's Chapel in Fayetteville. Given the restrictions necessitated by the COVID-19 pandemic, a private interment will be held at St. Paul's Episcopal Church at 9:30 a.m. Saturday, March 28. Please think of Ellen at that time. The family will host a celebration of her life later in the year and hope that her friends and extended family members will join them at that time.