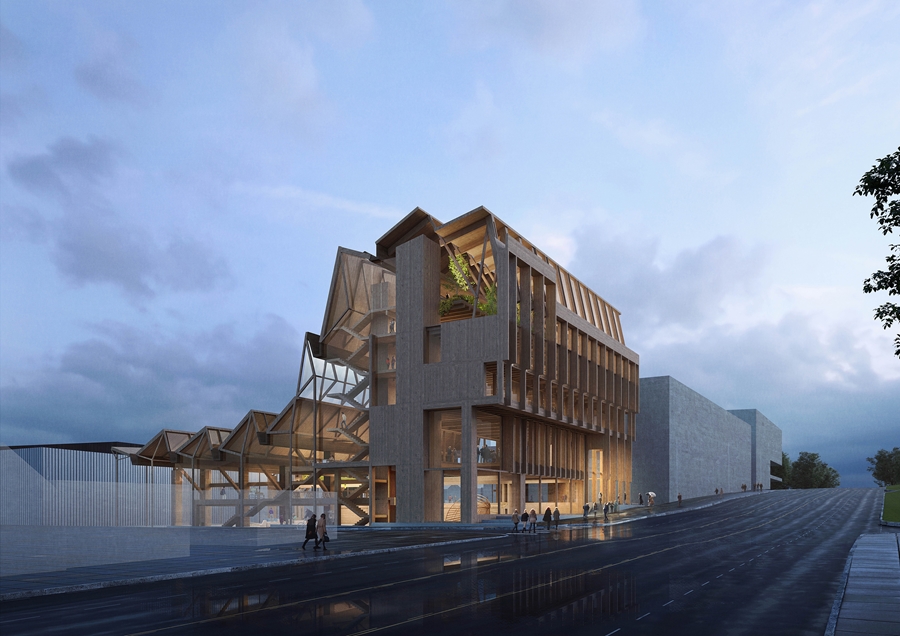 FAYETTEVILLE, Ark. – The University of Arkansas Board of Trustees has approved Grafton Architects, based in Dublin, Ireland, in partnership with Modus Studio of Fayetteville as the project team for the planned Anthony Timberlands Center for Design and Materials Innovation.

"This is fantastic news," said Farrell and McNamara. "We are very excited about building our first building in the United States in Fayetteville, Arkansas. This building helps us think about the future optimistically, where the use of timber with all its possibilities, becomes real, useful and hopefully loved."

This board approval on March 19 confirms the recommendation to the board by both the external evaluation team and the campus review committee of Modus Studio with Grafton Architects as the project team. This team will now continue to develop the design for the new $16 million design research center.

This planned center, part of the Fay Jones School of Architecture and Design, will be located on the northeast corner of the university's Windgate Art and Design District, along Martin Luther King Jr. Boulevard in south Fayetteville. This campus district houses existing and proposed buildings for the School of Art and University Libraries.

"We are delighted and honored by this opportunity to work with Grafton Architects and the Fay Jones School of Architecture and Design," said Chris Baribeau, principal at Modus Studio. "This is a unique opportunity to see the possibilities of an innovative wood building through an international lens while lending our Ozark perspective. Our passion for craft in architecture and making will serve our University of Arkansas students, faculty and staff for years to come."

The selection of the design team comes after a months-long process unlike anything previously done for a university building. The Fay Jones School initiated a design competition that was funded in large part by a grant from the U.S. Forest Service and the U.S. Endowment for Forestry and Communities.

"The University of Arkansas has been a leader in showcasing all the benefits of mass timber architecture," said Carlton Owen, CEO of the U.S. Endowment for Forestry and Communities. "We are looking forward to the results of a leading architectural university working with this year's Pritzker Prize winners to take wood-based architecture to new heights."

A total of 69 firms from 10 countries answered the university's request for qualifications from architects that was released Oct. 4. Peter MacKeith, dean of the Fay Jones School, served as chair of a campus review committee that reviewed the qualifications submitted by architects in November.

The finalist firms presented their proposals to public audiences and met with the review committee and external evaluators on campus Feb. 5 and 6. Videos of their public presentations can be found on the Fay Jones School's YouTube channel.

A STORY BOOK OF TIMBER

"The basic idea of this new Anthony Timberlands Center is that the building itself is a Story Book of Timber," Farrell said. "We want people to experience the versatility of timber, both as the structural 'bones' and the enclosing 'skin' of this new building. The building itself is a teaching tool, displaying the strength, color, grain, texture and beauty of the various timbers used."

She said that the building's cascading roof responds to the local climate, captures natural light and encloses this state-of-the-art educational facility. The building has a civic quality, opening up to show the vibrant research activities, not only to the students working within it, but also to the general public passing by.

In that team's assessment of Grafton Architects' proposal, the group noted its combination of "valid pragmatic ideas with a poetic solution. Simultaneously complex and simple, it expresses a high aspiration. It creates a memorable institutional landmark for the urban landscape of Fayetteville."

Of the six proposals, they said this one "presents the most compelling landscaping plan, demonstrating possibilities for integrating the architecture and art programs in the Windgate Art and Design District. The building fulfills its designer's ambition of being 'a storybook of timber.' … In synching material use to program, this approach offers students first-hand opportunities to learn about timber. The wood structures are educational in an experiential and poetic manner. The dramatically soaring, rhythmical space is an architectural abstraction of a sensorially rich forest condition."

"The selection of Grafton Architects, in partnership with Modus Studio, for the Anthony Timberlands Center project immediately magnifies the already immense significance of the Fay Jones School's current and future initiatives in the further development of timber and wood innovation for the state of Arkansas," said Peter MacKeith, dean of the Fay Jones School. "As Pritzker Prize winners and as RIBA Gold Medalists, the engagement of Yvonne Farrell and Shelley McNamara and all at Grafton Architects deepens and extends the legacy of architectural design excellence epitomized by our namesake Fay Jones, FAIA, the 1990 AIA Gold Medalist, a legacy now continued by our colleague Professor Marlon Blackwell, FAIA, and the 2020 AIA Gold Medalist.

"Further, as sensitive, resourceful innovators in the use of materials and construction, light and space, structure and detail, Yvonne and Shelley and their Grafton colleagues will bring to tangible presence the vision of John Ed and Isabel Anthony, Chancellor Steinmetz and Governor Hutchinson, and so many others across the state in the forest communities of Arkansas," MacKeith said. "Lastly, as an accomplished, recognized women-led practice, Grafton Architects confirms for all our students that the design professions are equally theirs in which to find their identities and to realize their potentials. Grafton's partnership with Modus Studio, an alumni-led practice already experienced in wood design, detailing and construction, augurs well for the successful execution of this important project. This selection, in short, is a landmark day for our school, our university and our state."

The design on the project is scheduled to begin this summer.

Grafton Architects was co-founded in 1978 by Shelley McNamara and Yvonne Farrell in Dublin, Ireland. McNamara and Farrell are the 2020 Pritzker Prize Laureates, and Grafton Architects received the 2020 Royal Institute of British Architects (RIBA) Royal Gold Medal, only the second women-led practice to win the prize. Their building for the Universita Luigi Bocconi in Milan, Italy, won the World Building of the Year Award in 2008 and the Royal Institute of the Architects of Ireland (RIAI) Triennial Gold Medal in 2018. In 2016, they were awarded the inaugural RIBA International Prize for the Universidad de Ingeniería y Tecnología (UTEC) in Lima, Peru. In 2017, they received the Thomas Jefferson Foundation Medal in Architecture.

McNamara and Farrell were the Curators of the 2018 Venice Architecture Biennale. Their manifesto, Freespace, was the title of the Biennale.

McNamara and Farrell studied in the School of Architecture at University College Dublin. After graduating in 1976 and through 2006, they taught at that university, where they were appointed as adjunct professors in 2015.

They are Fellows of the RIAI, International Honorary Fellows of the RIBA and are elected members of Aosdána, the eminent Irish Art organization. They have held the Kenzo Tange chair at GSD Harvard, the Louis Kahn chair at Yale University and have been visiting professors at EPFL in Lausanne, Switzerland. They are currently full professors at Accademia di Archittettura in Mendrisio, Switzerland, where they are now full professors. They have been external examiners at numerous universities and have lectured worldwide.

Grafton Architects has participated in numerous exhibitions, including the Sensing SpacesExhibition in 2014 in the Royal Academy in London; a Pavilion for the 2014 Tercentenary of the City of Barcelona; and "the Ogham Wall" installation in 2015 in the Victoria & Albert Museum, London. In the 2012 Venice Biennale, Grafton Architects' exhibit 'Architecture as New Geography' won the Silver Lion.

Operating on the idea that relevant and inspiring architecture can be sourced from simple, everyday experiences, Modus Studio departs from the general rule of form to create thoughtful architecture that begins to shape the present landscape and plan for a sustainable future. Modus is rooted in Northwest Arkansas and champions architecture as a means of navigating the threshold between the natural and manmade world. Based in a thinking/making philosophy, the firm bridges the worlds of design and fabrication with modus shop, providing the ability to build the things they believe in, to the level of craft they seek. The firm recently won a Small Projects Award from the American Institute of Architects, received the 2018 Architectural League of New York's Emerging Voices Award, and was named as a top 50 design firm in the United States by Architect magazine.