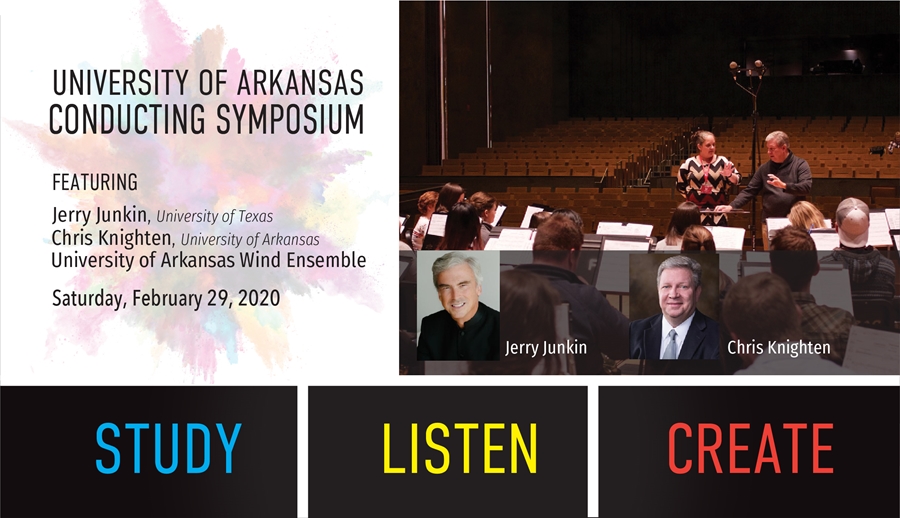 University of Arkansas Bands will open its spring concert season with three performances from Feb. 27 to March 10 at the Jim and Joyce Faulkner Performing Arts Center.

The concerts can be viewed live from the program's website. Tickets can be purchased online through the Faulkner Performing Arts Center.

The concerts will be anchored by the 2020 University of Arkansas Conducting Symposium on February 29.

Designed for instrumental music educators, graduate conducting students, and undergraduate music education majors, this symposium allows 12 participants the ability to explore the art of conducting by attending lectures and having two opportunities to conduct the University of Arkansas Wind Ensemble.

"We are excited to have Jerry Junkin join us. As one of the leaders in conducting pedagogy and wind bands, he will bring valuable insight to our students regarding the art and craft of conducting and ensemble performance," said Christopher Knighten, director of university bands. "His residency also allows us to invite public school music teachers from throughout the region to engage with the University of Arkansas Bands and Department of Music as a resource to further their own skills and artistry."

About the University of Arkansas Bands: The University of Arkansas Bands Program, inside the Department of Music in the J. William Fulbright College of Arts and Sciences, began in 1874 and is one of the oldest band programs in the country. The program has seven ensembles including the Razorback Marching Band, Hogwild Band, and five concert bands with over 400 student members representing every college at the university.