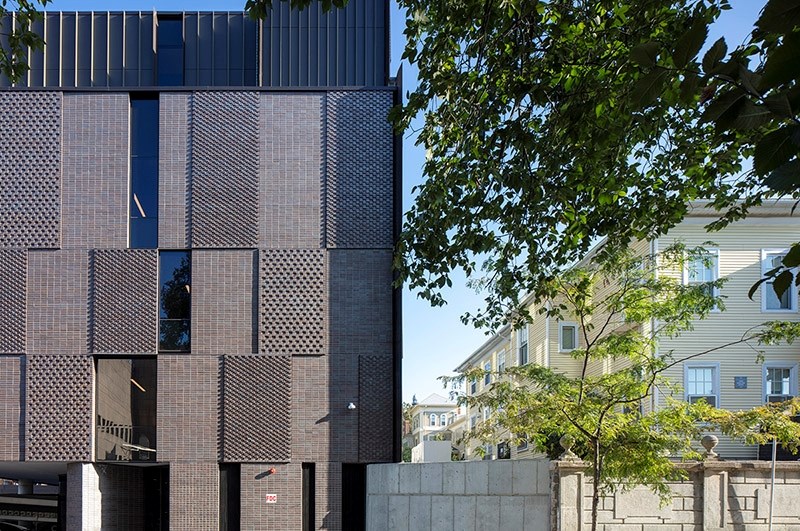 North Hall is a residence hall for art students at the Rhode Island School of Design, in Providence, Rhode Island.

FAYETTEVILLE, Ark. – Nader Tehrani will present a lecture at 4 p.m. Monday, March 2, in Ken and Linda Sue Shollmier Hall, Room 250 of Vol Walker Hall, on the University of Arkansas campus, as part of the Fay Jones School of Architecture and Design lecture series.

Tehrani is the founding principal of NADAAA, a Boston-based practice dedicated to the advancement of design innovation, interdisciplinary collaboration and an intensive dialogue with the construction industry. He is also dean of the Irwin S. Chanin School of Architecture at The Cooper Union in New York.

In his lecture, "Explorations Beyond a Besieged Autonomy," Tehrani will discuss how architectural practice is increasingly interdisciplinary, impacted by specializations of all sorts — some legitimate, some not — making the idea of the discipline increasingly suspect.

Architectural practice has recently been besieged by advances in technologies, new forms of knowledge such as big data and infographics, and a more conscious braiding of the arts and sciences.

The boundaries of architectural practice are ever-expanding, giving the core of the discipline a frayed edge. The incremental encroachment of other parallel fields — branding, graphic design, fabrication, landscape architecture, public art and even film — are beginning to suggest their own centrality on design practices, making the idea of an architectural autonomy ever more vulnerable.

Yet architects continue to play a synthetic role, bringing integration and a common platform to these diverse agendas. This produces a predicament around which many design practices have begun to revolve. This talk will attempt to position the charge of design invention in a time when the idea of autonomy is all but obsolete.

Tehrani was previously a professor of architecture at Massachusetts Institute of Technology, where he served as the head of the department from 2010-2014.

Tehrani received a Bachelor of Fine Arts and a Bachelor of Architecture from the Rhode Island School of Design in 1985 and 1986, respectively. He continued his studies at the Architectural Association in London, where he attended the post-graduate program in history and theory. Upon his return to the United States, Tehrani received the Master of Architecture in Urban Design from the Harvard Graduate School of Design in 1991.

He has taught at the Harvard Graduate School of Design, Rhode Island School of Design, the Georgia Institute of Technology, where he served as the Thomas W. Ventulett III Distinguished Chair in Architectural Design, and the University of Toronto's Department of Architecture, where he served as the Frank O. Gehry International Visiting Chair in Architectural Design. He also recently served as the William A. Bernoudy Architect in Residence at the American Academy in Rome and the inaugural Paul Helmle Fellow at California State Polytechnic University, Pomona.

Tehrani has lectured widely at institutions such as the Guggenheim Museum in New York, Harvard University, Princeton University and the Architectural Association. He has participated in many symposia, including the Monterey Design Conference (2009), the Buell Center "Contemporary Architecture and its Consequences" at Columbia University (2009) and the Graduate School of Design "Beyond the Harvard Box" (2006).

His work has been published in a variety of international journals, reflecting his research on materiality, fabrication and tectonics. Selected articles include: "Versioning: Connubial Reciprocities of Surface and Space," published in Architectural Design (2002); "Aggregation" and "Difficult Synthesis," featured in Material Design: Informing Architecture by Materiality, by Thomas Schroepfer (2011); "A Disaggregated Manifesto," published in The Plan (2016); and "The Tectonic Grain," featured in Manifesto 21 (2017).

Over the past seven years, NADAAA has consistently ranked as a top design firm in Architect magazine's Top 50 U.S. Firms List, ranking first during three of those years.

This is the Ernie Jacks Lecture, sponsored by Marlon Blackwell Architects.