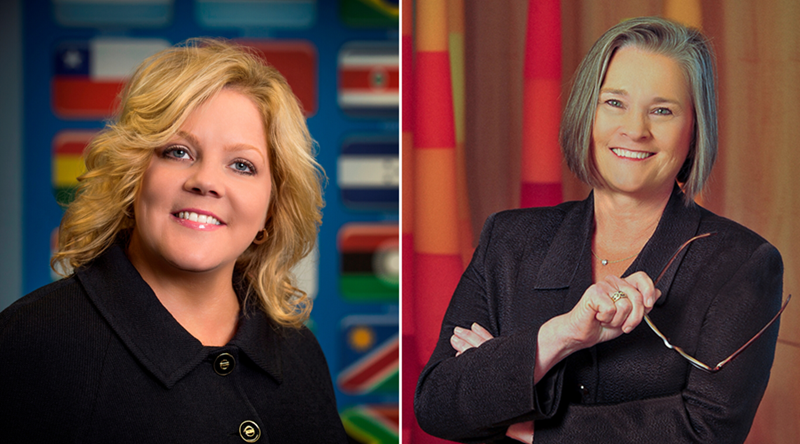 The legal and campus communities are invited to join the WLSA and the School of Law for a celebratory reception at 5 p.m. Monday, Feb. 24, at Fresco Cafe and Pub on Center Street in Fayetteville.

Students identify women who promote the association's objectives of helping women thrive in law school, creating a community that will raise awareness of women's issues and advancing women in the legal profession. The honor recognizes those who best represent the accomplishments of women and the legal community as a whole. The award is given annually, and a joint reception is held on alternate years. Roberts and Jones are the 2019 and 2020 awardees, respectively.

The Gayle Pettus Pontz Award was established in 1985 to honor the first woman graduate of the University of Arkansas School of Law. Pontz, LL.B.'37, was also the award's first recipient. After law school, Pontz returned to her native Louisiana, where she served as the state's first woman assistant U.S. Attorney. She was a law clerk for the Louisiana Supreme Court in New Orleans and the Louisiana Second Circuit Court of Appeal in Shreveport. She retired from the Second Circuit Court in 1978.

Roberts is executive vice president and general counsel for Walmart Inc. In this role, she oversees the legal department, which is responsible for handling all legal matters affecting the company in its domestic and international markets.

As the leader of Walmart Legal, Roberts ensures the company's compliance with the laws and regulations in the regions it operates, forecasts possible issues and works ahead of them to ensure the company's readiness and heads department initiatives such as its Medical-Legal Partnership Program and its diversity and inclusion efforts.

She was previously executive vice president and president of Walmart Realty, where she was responsible for Walmart's real estate operations and a portfolio of nearly 1 billion square feet. In this role, she ensured the company fulfilled its commitment to be a good neighbor by working with communities to generate jobs, spur economic growth and continue its mission to save people money so they can live better.

She earned a Bachelor of Science in public administration from Harding University and a Juris Doctor from the University of Arkansas School of Law. She is a member of the Arkansas Bar Association and the American Bar Association.

Jones has more than 30 years of trial experience, during which she has served as national trial counsel representing various corporations and has tried cases throughout the United States. In many of these instances, she has served as lead counsel in bellwether trials. Her main areas of practice include: drug and device litigation and professional liability.

She is a Fellow in the American College of Trial Lawyers, was named in America's Top 100 Attorneys in 2016 and is rated AV-Preeminent by Martindale-Hubbell 2005-2017. Jones has been listed in Best Lawyers in America, Super Lawyers, Chambers USA: America's Leading Lawyers for Business, Who's Who Legal (Litigation, Product Liability Defense, Life Sciences) and Benchmark Litigation.

Jones graduated with a Bachelor of Arts in political science, Phi Beta Kappa, from University of Arkansas J. William Fulbright College of Arts and Sciences in 1974. She earned a Juris Doctor, withhigh honors, in 1977 from the University of Arkansas School of Law, where she was managing editor of the Arkansas Law Review. She was admitted to the Mississippi Bar in 1977. Additional Bar admissions include: U.S. District Courts (Norther and Southern Mississippi), the U.S. Court of Appeals (4th and 5th Circuits), and the U.S. Supreme Court. She has also been admitted pro hac vice in many states around the country.