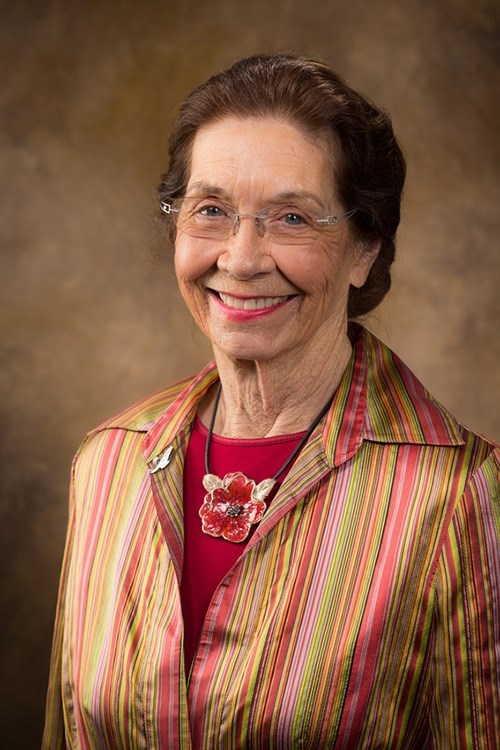 FAYETTEVILLE, Ark. – Marilyn Bogle, a long-time advocate of the University of Arkansas and Razorback Athletics, passed away Thursday morning, Jan. 23, 2020, in Bentonville. She was 88.

Bogle, along with her husband Bob and the rest of the Bogle family, have always shown a strong committment to the support of excellence in academics and athletics at the U of A. Among those contributions, Marilyn was especially pivotal in her support of the Dale Bumpers College of Agricultural, Food and Life Sciences, the Department of Animal Science and the expansion and growth of women's athletics at the U of A.

"Marilyn Bogle, along with the entire Bogle family, has been one of our biggest advocates over the years," Chancellor Joe Steinmetz said. "This university would not be where it is today without the attention and care that has been given to us by people like Marilyn. Her devotion to the state of Arkansas and the University of Arkansas has continued to benefit our entire student body and enrich their experiences while working toward a college degree. We will miss her compassion and her friendship, but her legacy will continue to live on."

Eight members of the Bogle family have graduated from the University of Arkansas including Bob Bogle, David Bogle, Bob and Becky Alexander, Dr. James and Ann McKenzie, Ben Bogle and Erin Easley.

In addition to their support, the Bogles are life members of the Arkansas Alumni Association, members of the Chancellor's Society, and are recognized as "Thoroughreds" for their consecutive years of giving to the university. Marilyn was a member of the Women's Giving Circle and was the initial chair of Campaign Arkansas.

On one of their first dates Bob took Marilyn to a Razorback football game in Little Rock which began a lifelong passion for following the Razorbacks. Over the years attending Razorback games and events became a family affair.  Marilyn became especially interested in the U of A women's sports and especially softball, basketball, and gymnastics.  With their love for the University of Arkansas they endowed several academic and sports scholarships as well as contributing to many building projects on campus. She also served on Committee for the 21st Century, and the Red Tie Dinner committee.

Their support is also evidenced by the Bob and Marilyn Bogle Academic Center, the Bev Lewis Center, and the George Billingsley Tennis Center. They have also supported the renovation and expansion of Donald W. Reynolds Razorback Stadium and Baum-Walker Stadium. In May 2008, Bogle Park, one of the nation's premier softball facilities, was officially dedicated.

"The Razorback family has lost one of its most gracious and passionate members," said Hunter Yurachek, vice chancellor and director of athletics. "Through her words and generous actions, Marilyn positively impacted the lives of millions of Arkansans and made our university and state a much better place. Her longtime dedication to the continued growth of student-athletes, both academically and athletically, made a difference in the lives of the young men and women who competed as Razorbacks. Marilyn's commitment to expanding intercollegiate athletics opportunities for women was truly transformational. We have lost a dear friend, but the lasting legacy of Marilyn Bogle will continue to shape our program for generations to come."

Over the years, the Bogles' generosity has impacted not only the campus of the University of Arkansas, but also the surrounding Northwest Arkansas community. Those charitable causes included the Walton Arts Center, the Symphony of North Arkansas, AR Care, the NWA Children's Shelter, Bentonville Public Schools and the Bentonville Public Library.

The family's support of their community and their love for the outdoors has resulted in several new parks and gardens in Bentonville. Bogle was a member of the Bentonville Garden Club since 1986. Multiple outdoor parks have been created in the area, including the original "Bogle Park," located across from Bob and Marilyn's home in Bentonville.

She was also inducted into the U of A Sports Hall of Honor for her loyal support, and received the "Outstanding Friends" award by the U of A Horticulture Department.

In 2007, Marilyn was appointed by Gov. Mike Beebe to serve on the Arkansas Governor's Mansion Commission, a position she held until 2012. The Bogles were also awarded the Sam Walton Award for distinguished service in 2002 by the Bentonville-Bella Vista Chamber of Commerce, becoming only the third recipients in the award's history, joining Sam Walton in 1979 and John A. Cooper in 1983.

She is survived by her husband of 69 years, Robert L. Bogle of Bentonville; her children: David Bogle, Becky Alexander and Ann McKenzie; four grandchildren; three great-grandchildren; a sister, Frances Scott; a sister-in-law, Wilma Bogle; and numerous nieces and nephews.

Funeral services will be held at 1 p.m. Tuesday, Jan. 28, at First Baptist Church in Bentonville. Visitation will be held from 11 a.m. until service time. A private burial will follow the ceremony.

In lieu of flowers, memorials in her honor may be made to the Northwest Arkansas Children's Shelter, the Helen Walton Children's Enrichment Center, or AR Care of Augusta, Arkansas.