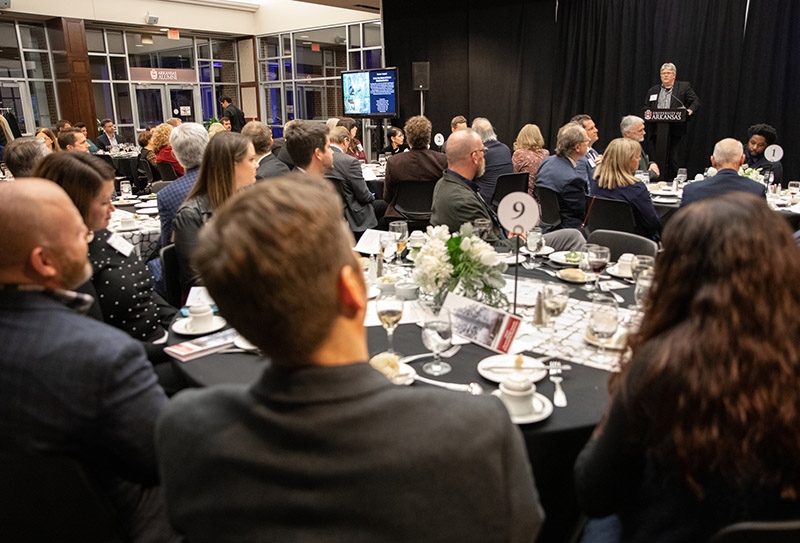 The Fay Jones School of Architecture and Design honored Awards for Distinction recipients, alumni design award winners and Golden Graduates at a Dec. 12 ceremony at the Janelle Y. Hembree Alumni House on the University of Arkansas campus.

FAYETTEVILLE, Ark. – For the fourth year, the Fay Jones School of Architecture and Design at the University of Arkansas honored several individuals who have made contributions to the school, university and culture of design with Awards for Distinction. These awards were presented, along with annual alumni design awards, during the school's Winter Fest Dinner and Recognition Ceremony, held Dec. 12 at the Janelle Y. Hembree Alumni House on the university campus. The school also recognized Golden Graduates, alumni who graduated from the university at least 50 years ago.

"We're fortunate to be able to recognize those who have contributed to the school and the larger design culture of Arkansas through their service, wisdom and example," said Dean Peter MacKeith. "The diverse recipients of our Awards for Distinction this year are drawn from near and far and characterize our school's commitment to public service in the state and, indeed, in the world through the power of design."

Distinguished Service Awards were given to DeDe Long, Florence Johnson, Scott Emmelkamp (B.L.A.'87) and Judy Stone. This distinction is awarded annually in recognition of the recipient's significant contributions to the students and resources of the Fay Jones School, the university and the community.

Long retired in July 2019 as emeritus director of the Office of Study Abroad and International Exchange. She also served as the Fulbright campus program advisor for 25 years and is very active with the Arkansas Chapter of the Fulbright Association. Johnson has served as executive director of University Housing at the U of A since 2011. She has also been a significant partner in visioning and building Adohi Hall, constructed using cross-laminated timber and featuring a Living Learning Community for students in the arts and design disciplines.

Emmelkamp is a managing principal at Planning Design Studio, a landscape architecture and urban planning firm in St. Louis. He is serving his second three-year term on the American Society of Landscape Architects Board of Trustees and just completed a two-year term as chair of the Membership Services Committee at the national level. He is a past president of the Professional Advisory Board for the Fay Jones School.

Early Career Alumni Awards were given to Margaret Selzer (B.I.D.'04), Tanner Weeks (B.L.A.'98), Mark Rukamathu (B.Arch.'03) and Calli Verkamp (B.Arch.'13). This distinction is awarded annually in recognition of an alumnus or alumna in recognition of their significant contributions early in their career to the architecture and design culture locally, regionally, nationally and internationally.

Selzer, who graduated with honors, brings more than 12 years of interior design experience to her business, River+Lime. With a focus on hospitality and residential projects located in resort communities across the country, Selzer and her team partner with each client to create spaces that are functional, beautiful and reflective of the natural environment that is unique to each project. Rukamathu received a Master of Architecture from Harvard University's Graduate School of Design, with distinction, in 2013, and he co-founded the design/fabrication practice rukamathu.smith. He taught at Northeastern University, Rhode Island School of Design, Roger Williams University, and Chulalongkorn University's International Program in Design and Architecture, and now serves as faculty and director of Special Projects at The Boston Architectural College. Verkamp, who graduated as a fellow of the Honors College, joined Wheeler Kearns Architects in Chicago, where she has contributed to a wide range of endeavors. Her emerging leadership in preservation design has brought her back to Arkansas for work on the Momentary, a cutting-edge visual arts and performance space born of a decommissioned Kraft Foods plant. Weeks, a principal at Ecological Design Group, who appreciates the value of public space, expressing his design strengths in urban design and park planning projects. His detail-oriented focus, combined with extensive construction experience, allows him to influence design solutions that positively impact the urban fabric.

Distinguished Alumni Awards went to Michelle Behr (B.I.D.'00), C.L. Bohannon (B.L.A.'02) and Kevin McClurkan (B.Arch.'84). This distinction is awarded annually in recognition of an alumnus or alumna for significant, continuing contributions to the architecture and design culture locally, regionally, nationally and internationally.

Behr received a Master of Science in Real Estate from New York University. She currently serves as vice president of design and construction for Highgate Hotels. Bohannon, Ph.D., is an assistant professor and joined the faculty at Virginia Polytechnic Institute and State University in 2014. His research has led to contributions to the theorization and application of community engagement in design education. He was a recently named an Emerging Engagement Scholar by the Engagement Scholarship Consortium. McClurkan is a Management Partner at Ennead Architects LLP, where he ensures that operations run smoothly and consistently with the firm's mission. He is a John G. Williams Fellow of the Fay Jones School and a member of the school's Dean's Circle.

Dean's Medals were given to Sunny Evans, Gay Anthony, TheatreSquared and the U.S. Forest Service. This distinction is awarded annually in recognition of the recipient's significant contributions to the architecture and design culture of the state of Arkansas, and to students and their education at the Fay Jones School.

Sunny Evans, with her late husband, Bob, have been long-time supporters of Garvan Woodland Gardens at the U of A. Their contributions helped complete the sanctuary within the Anthony Chapel and provided funding for the Evans Groom's Quarters, the Evans Celebration Garden, the Evans Children's Adventure Garden and, most recently, the Evans Tree House. Sunny Evans is also a member of the Garvan Woodland Gardens Capital Campaign Committee for Campaign Arkansas. Together, Gay and Steven Anthony's association with Anthony Timberlands Inc., for which he serves as president, has made them familiar figures in the Arkansas building industry. The Anthonys acquired and preserved Pine Knoll, Fay Jones' first project situated outside of northwest Arkansas, and, consequently, the house that established. Through their stewardship and best practices of preservation design, Gay and Steven Anthony — with the counsel of their architect Rodney Parham and interior designer Brittany Nixon Brun (B.I.D.'05) — gave new life and vitality to the structure and contributed immeasurably to Jones' enduring legacy. This fall, TheatreSquared opened the region's first dedicated, permanent home for professional theater. The region's new 50,000-square-foot, two-venue facility was designed by international design award recipients Marvel Architects and Charcoalblue. As the first recipient of a Northwest Arkansas Design Excellence Program grant, TheatreSquared broke new ground in multiple ways, setting a new standard for theater design and community design for the region. The U.S. Forest Service's mission is to sustain and steward the health, diversity and productivity of the nation's forests and grasslands to meet the needs of present and future generations. Its Wood Innovations Program supports traditional wood utilization projects, expands wood energy markets, and promotes using wood as a construction material in commercial buildings. Altogether, the U.S. Forest Service has been a proactive and progressive force in the emerging forest economy of the 21st century, and in particular, has seen value in the work of the Fay Jones School in one of its key initiatives, and has provided counsel and commitment to the school's mission.

Steve Marquess (B.Arch.'69) was recognized at the ceremony as a Golden Graduate by the Arkansas Alumni Association. This distinction is for graduates from 50 or more years ago who are automatically members of the association's Golden Tower Alumni Society.